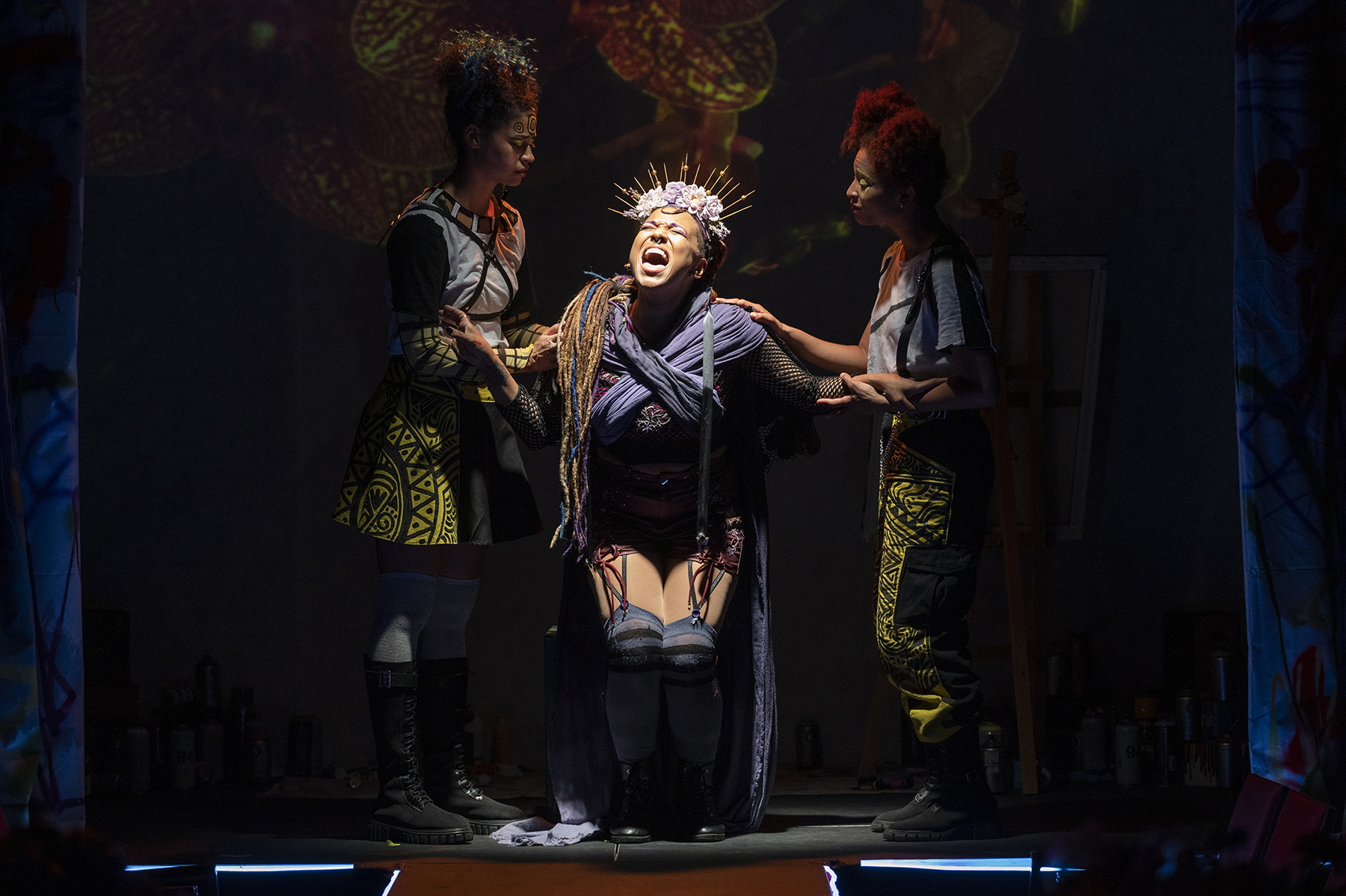 Set Designer Eleanor Kahn and Props Designer Caitlin McLeod transform the intimate black box theatre. Prescription-pill-bottle-candles line the room. “#rip2abadbitch,” written in neon graffiti letters, plasters the back wall next to the DJ’s stand. Spray-paint-splattered curtains on the opposite end of the room mark the entrance to a T-shaped runway that stretches across the space, dividing the audience into four squares.

The effect is uniquely intimate; the audience faces each other to look at the stage. The show’s DJ (P1) gives a rousing introduction, asking the audience for vocal responses. Unfortunately, we were all low-energy when I attended. A natural result of a trip to the theatre on a cloudy Sunday afternoon, or a symptom of a crowd struggling with mental health issues of their own? I couldn’t say.

Lynnette’s story, astutely co-directed by Lucky Stiff and Roger Ellis, is vulnerable and moving, with music expressing a unique mix of angst and rage combined with a desire to grow and heal. Crediting her artistic expression for helping her ‘get out alive,’ Lynette’s new musical shows us just how meaningful artmaking can be. Her monologue is on point, describing state-mandated rehabilitation after a miscarriage and subsequent suicide attempt as “psychiatric jail, but with graham crackers,” and wondering, when she and her mother experienced so much of the same domestic and sexual abuse, “How come we never talked about it?” Imagining a conversation with a toxic ex who no longer has influence over her life, she explains to the audience the process of cellular turnover every 7 years, proclaiming, “I slept with you a whole pussy ago!”

Lynette’s captivating stage presence is accompanied by two backup dancers played by Keeley B. Morris and Jacinda Ratcliffe. These two performers have the musical theatre talent to match Lynnette’s rockstardom. They assist her by roleplaying a few of the many characters in Lynette’s life. They each shine in solo dances throughout the musical and in brief moments of dialogue, although their presence was often underutilized in the storytelling, despite their near-constant participation in song and dance and their frequent interactions with the audience.

As much as I admired the design of the space, the acoustics weren’t quite right. Morris and Ratcliffe’s skills as theatre performers are noticeably different than Lynette’s. The latter’s ability to tell a story and musical performances were exceptional, but I often missed chunks of dialogue and song via an unfortunate combination of under-enunciation, and my choice to sit close to the runway entrance, in a section that Lynette often had her back to.

Lynette’s story is important, relatable, and empowering. As a new fan of her music, I feel lucky to have experienced this personal and intimate account of her mental health journey, and the stories behind some of her most incredible songs. Her story gives me hope for future healing, especially for Black femmes. She deftly names the systems of oppression she faced, the barriers to her accessing effective mental health support, and the contrasting impact of individuals who encouraged her to use her art to help others and as a reason to stay alive. Her story shows us what is possible, but it still left me wondering how much of her survival is replicable, and how much we each have to figure out for ourselves.

Get Out Alive runs until August 6 at The Den. The show is 100 minutes with no intermission. Masks and proof of vaccination are required.