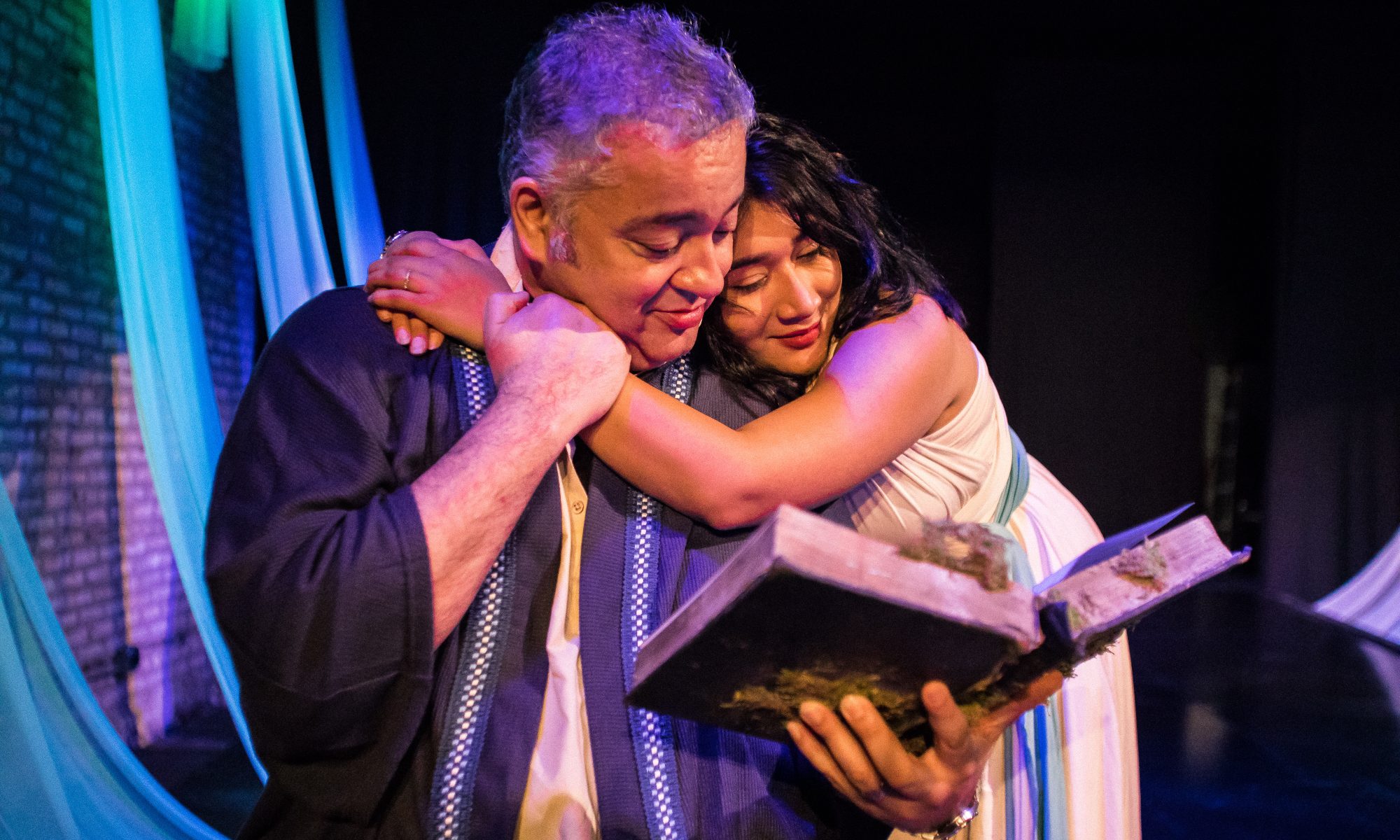 Directed by Kathy Scambiatterra, the Artistic Home’s production of Sarah Ruhl’s Eurydice marks the end of the actor-centered company’s pandemic hiatus. Ruhl’s script breaks from most tellings of the classic Greek myth of Orpheus by adopting the perspective of Eurydice as it explores themes of grief, memory, and eternity. While the Artistic Home’s production captures the visual wonder and lyricism of Ruhl’s script, some elements of the production rob Euryidce’s choices of their stakes, making the show feel more like a string of impressionistic vignettes than a climactic narrative driven by an empowered heroine.

On the night of her wedding, Eurydice falls to her untimely death. As her husband Orpheus desperately searches for a way to resurrect his bride, in the Underworld, Eurydice reunites with her late father and struggles to piece together the details of her life. Karla Corona plays Eurydice with an exuberance that could read as childlike were it not tempered by her frankness, and the probing, inquisitive gaze of an old-soul. Corona’s Eurydice finds her perfect match in Javier Carmona’s Father, a tender and slow-spoken man full of understated humor. The two have remarkable stage chemistry: Corona’s Eurydice always full of questions or candid observations and Carmona’s Father ready to listen attentively and weigh in with a thoughtful opinion. Enhanced by Scambiatterra’s directorial choice to emphasize moments of humor and joy, the tenderness and delight in the scenes between the father and the daughter make for some of the most moving moments of the play.

Kevin Hagan’s set and lighting design rises to the challenge of Ruhl’s fantastical design elements (an onstage river and a house made of string, anybody?) and embodies all the strangeness of limbo, complete with black lights that accentuate Zachery Wagner’s costumes. From the echoing caverns of the underworld to Orpheus’s twelve-instrument orchestra, Peter Wahlback’s sound design shows off remarkable artistic range and creates a worthy backdrop for a play tied together by art and music.

However, at times, the story tying these disparate elements together lacks compelling stakes. While Corona and Carmona provide much of the play’s heart, in comparison, the relationship between Eurydice and the wistful Orpheus (Steven Cooper) feels hollow. In the few moments where the couple shares the stage, their sweeping, grand expressions of love are one-dimensional and devoid of specificity. Later, when Orpheus mourns Eurydice, the subsequent monologues are delivered with oversold wistfulness and lack the intimacy so palpable in Carmona’s understated tenderness. When Eurydice is forced to choose between her lover and her father, the decision feels all too easy. If Eurydice’s relationship with her father is a 12-instrument symphony, her relationship with Orpheus is a simple tune plucked out one note at a time.

Elements of blocking do little to build tension. Once Eurydice enters the underworld, the blocking becomes formulaic: as the Stones watch from upstage, Eurydice and her father converse inside their string house. Occasionally, Orpheus enters to proclaim his longing for his lost bride, but always from the same downstage left corner. This visual holding pattern continues for the better part of the play.

I took particular issue with the production’s choices regarding the Nasty Interesting Man and the Lord of the Underworld, both played by Todd Wojcik. In both of Eurydice’s interactions with these men, Ruhl’s script evokes images of rape and assault—indeed, Eurydice falls to her death in a failed attempt to flee rape at the hands of the Nasty Interesting Man. Yet, both characters are played for laughs. As the Nasty Interesting Man, Wojcik exaggerates his flamboyant poses and condescending drawl to the point of comedy. Audience members were laughing uproariously even as he barred Eurydice’s exit, trapping her in his apartment. It was beyond jarring to see audience members more engrossed by the capers of the rapist than the fear of the protagonist. Later, The Lord of the Underworld convulsively thrusts his hips at Eurydice throughout the entirety of their conversation.

To evoke sexual assault without a content warning is irresponsible in itself. To then trivialize assault by emphasizing the humorous antics of the predator rather than the experience of the victim is beyond harmful. It makes light of Eurydice’s trauma, a trauma that perhaps many audience members share, and indeed 1 in 6 women will experience in their lifetime.

To be fair, Ruhl’s script may be to blame for much of the production’s treatment of assault. Written in 2003, the script’s humor may not be tasteless, per se, so much as it is dated.  Indeed, a play that has its only female character choose between three men—her husband, her father, and her rapist—would hardly pass muster as an empowering woman-centered narrative today. For all its timeless source material, many of the themes in Ruhl’s script may have gone the way of Carrie Bradshaw’s behavior in Sex in the City.

Still, a dated script does not excuse the Artistic Home for choosing to play into the script’s humor. If anything, a company that produces Eurydice should be even more careful to unpack and grapple with the play’s more unsavory themes. Artistic Home’s failure to do so leads to some dramaturgically dicey moments. For example, narratively , this choice to play up the “nastiness” of Wojcik’s Lord doesn’t add up, because it robs Eurydice of agency. In the final scene, Eurydice must choose between becoming the queen of the Underworld and retaining her memories, or dipping herself in the river of oblivion and forgetting. However, the heavily implied threat of assault makes Eurydice’s decision feel like a simple act of self preservation, rather than a choice between grief and oblivion. For the second time in the play, the heroine’s decision feels like a no-brainer.

The allure of Ruhl’s retelling is that it breaks with tradition and centers Eurydice, endowing a female character, so often portrayed as a passive wife, with some degree of agency. Yet, in this production, Eurydice wields power over small choices with few stakes—and even then, the Lord of the Underworld forces her hand.

There is a lot to love in individual elements of the play: the earnestness of Eurydice’s relationship with her father, the surreal design elements, and of course Ruhl’s poetry. However, Artistic Home’s Eurydice fails to make any of Eurydice’s choices seem particularly difficult. Caught between an nauseatingly sweet love affair, sexual assault, and peaceful oblivion, the heroine’s eventual doom feels determined—a fact that robbed the plot of much of its stakes. Without stakes, the Artistic Home’s production feels more like a wash of speeches and tableaus, rather than a cohesive narrative.

The Artistic Home’s Eurydice runs at the Den Theatre until November 21.