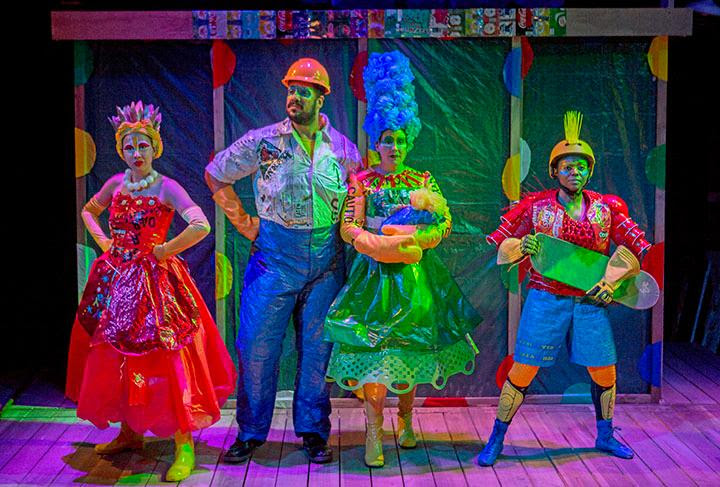 The stunning chemistry between the ensemble cast is clear from the first lines of dialogue. The ragtag collection of survivors huddle together against a dark and abandoned wooden playground set, designed by Joe Schermoly, and attempt to recount the story of “Cape Fear.” Matt (Daniel Desmarais) and Jenny (Will Wilhelm) lead the effort, while the others defend against an unknown threat lurking offstage. The scripted conversation flows naturally, and the joy of communal memory almost makes you forget about the apocalyptic backdrop. As an audience member, you almost feel like a part of the conversation. I certainly had to bite my tongue to keep from interjecting when a character misquoted a joke.

The chemistry established in the first act leaps to new heights as more ensemble members join the production in the second and third acts, adding to the group dynamic. Leslie Ann Sheppard makes her first appearance on stage as Quincy, who dazzles as the star performer in the traveling theatre troupe’s live commercial breaks. Sheppard and her scene partner, Jonah D. Winston, are a comic duo that skillfully introduces you to the next stage of this post-collapse civilization. The entire second act is a masterclass on world-building. Without ever leaving the theater troupe’s rehearsal, you learn everything you need to know about the world outside. The cast of characters exchange theories about how many Diet Cokes survived the collapse and bicker over the production value of their biggest prime-time competitors. The ensemble expertly manifests the harsh realities of this imagined future.

The third act is where all of the tech and design elements truly become spectacular. Costumes by Mara Blumenfeld and props by Jonathan Berg-Einhorn transform plastic artifacts, in the form of Diet Cokes and Doritos bags, into epic features. The predominantly musical act is elevated by musical director Eugene Dizon, and the scoring adds a welcome drama to the elaborate fight choreography by David Woolley. The big finish, brought to you by lighting designer Heather Gilbert, is the wow moment worth the nearly three-hour run time.

The world of Mr. Burns isn’t limited to The Simpsons. The script includes a plethora of pop culture references, from recent top 40 hits to Hollywood classics. The entire production is an easter egg hunt; even a Simpsons novice will find something that they recognize. There were certainly moments in the play where someone in the audience got a joke that completely went over my head, and vice versa. That’s the fun of Mr. Burns. It takes inspiration from a collection of works that make up our culture and imagines how those pieces might morph together after years in the dark have blurred the lines.

Artistic Director Jeremy Wechsler reprises his role as director and revisits Theatre Wit’s 2015 Chicago premiere of Mr. Burns with a refreshed nostalgia. Returning artists and cast members reunite with some welcome fresh faces added to the mix. There’s a sense of homecoming that permeates the theatre. Despite this familiar feeling, however, there’s a charged undercurrent of change present as well. A lot has happened between 2015 and 2021. The idea of a global catastrophe feels a lot closer to fact than fiction. In three tremendously independent acts with two 15-minute intermissions, Mr. Burns reminds us why the stories that matter stick around.