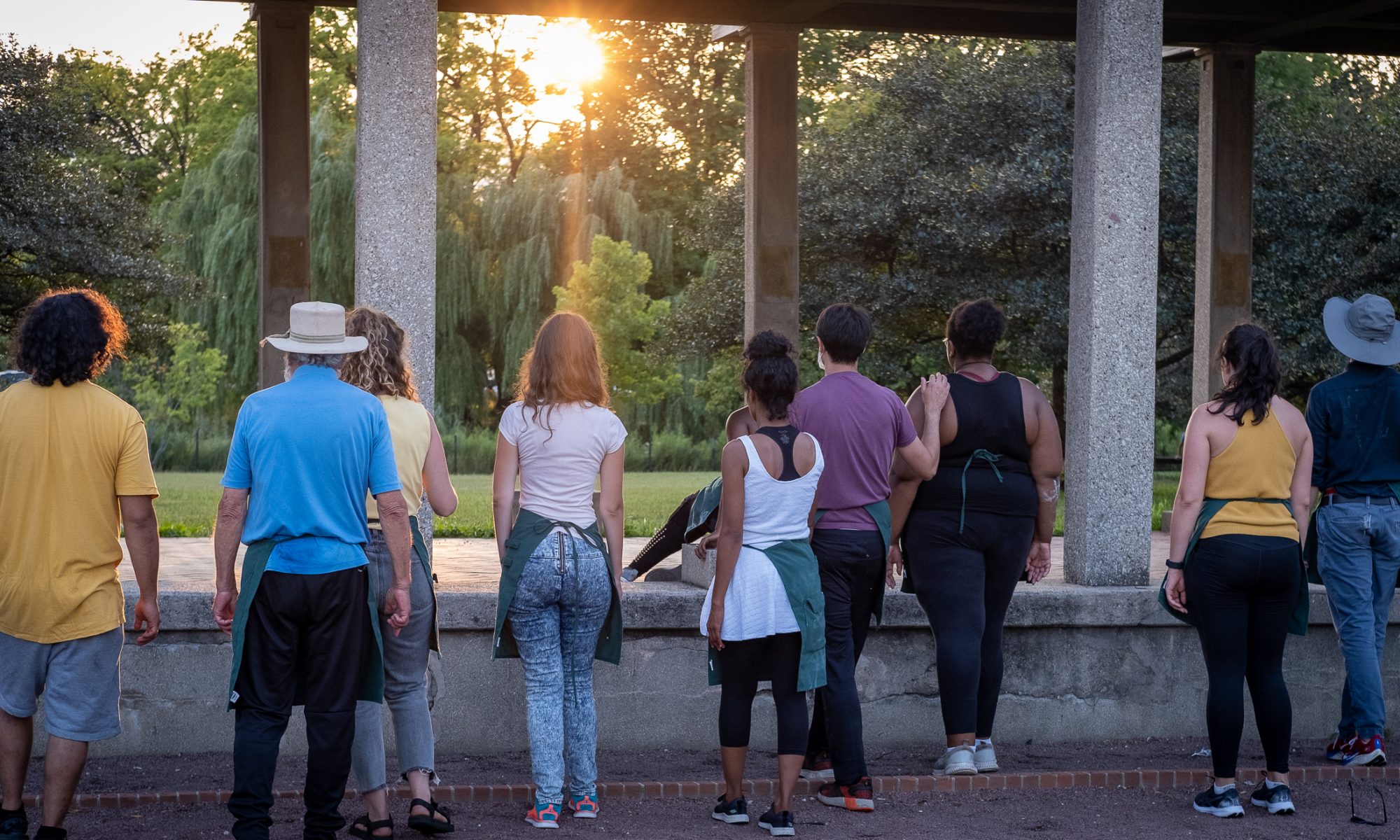 YOU ARE HERE: The Emerald Camino Project is a month-long series of ambulatory performances held across twelve neighborhoods connected by Chicago’s Emerald Necklace in the South and West Sides. The performance itself feels like a delightful cross between a walking tour, a chaperoned blind date, and an immersive art piece. Before setting out, each participant is paired with a stranger and a Theatre Y actor. The actor guides the two through the walk and facilitates conversation between the two. Led by actor Haman Cross III, the groups walk through the neighborhood, visiting landmarks, listening to presentations by community leaders, and enjoying performances by local artists (in North Lawndale, the performers were high-school-aged rapper Marcus Quinn Jackson and Willie Round, a.k.a. Prince Roc, a rapper and poet gifted with a resonant bass voice).

The comparison of YOU ARE HERE to the Camino del Santiago, an ancient Christian pilgrimage through France and Spain, is earned. The six-hour experience is less of a performance and more of a joyful journey of self-reflection facilitated by Theatre Y’s actor guides and set against the backdrop of a Chicago neighborhood. Rather than dealing in distraction, the neighborhood Caminos encourage audiences to find wonder in the present moment and remember that “YOU ARE HERE.”

And it doesn’t hurt that you also get your steps in.

I attended the North Lawndale Camino, which began in Family Park, just a five-minute walk from the Pink Line’s Central Park station. From the start, the performance ruptured the traditional anonymous distance between actors and audience members. After checking in Theatre Y’s volunteers, I was given a small MP3 player, invited to listen to a track created by sound designer Kimberley Sutton, and instructed to find a seat in a small circle of the wooden benches, which had already begun to fill with participants. Actors wearing green aprons walked among us, stretching in preparation for the walk ahead. Once we had gathered in the circle—about two-dozen participants in total—the ensemble marked the start of the performance with an improvised movement piece. After a quick introduction to the piece itself, Camino leader Haman Cross III paired each participant with a stranger and led them to their actor-guides.

I found myself in a group with actor Clara Byczkowski and a forty-four-year-old audience member who decided to go by the name Goddess for the duration of the piece (“I’m feeling playful today,” she explained, smiling). After a quick round of introductions, Byczkowski asked Goddess and I to queue up a track on our MP3 players and spend all of its four-minutes staring into each other’s eyes . And just like that, as a soundscape of softly strummed guitar and murmured poetry drowned out the noises of the park, I found myself face to face with Goddess, completely robbed of the comfortable anonymity of being an audience member.

The four-minutes of eye contact set the tone for the performance. Throughout the next six hours, as the tour wended various sites around North Lawndale, I found myself guided outside my comfort zone of spectatorship. Between stops, Clara encouraged Goddess and myself to share personal stories in response to various self-reflective prompts: What’s your most treasured memory? When was the last time you cried? What’s something you’ve always wanted to do? At the ‘Love Blooms Here’ Pop-Up Museum, the group was invited to scrawl a message on one of the walls. At another I was led blindfolded through a parking lot.

I use the phrase “guided outside my comfort zone” rather than “pushed out of my comfort zone” intentionally. While I was self-conscious to start, as the pilgrimage wended on, I slowly warmed up to the intimacy and engagement the project demanded. A lot of this was thanks to Theatre Y’s actors, who fostered a welcoming and non-judgmental environment by listening attentively to our stories, answering our questions thoughtfully, and staying attentive to their assigned group.

Moreover, the performers emphasized that the point of the performance was shared discovery: while there was a general structure to the piece and some rehearsed elements, there was no strict plan for its six-hours. The performers welcomed deviations in the planned itinerary with a smile, yes-and-ing whatever the day threw at us. When the youngest trekker, a preschool-aged girl whose beaded braids clicked as she danced, began to copy the choreography of the actors, they welcomed her to the stage—even giving her a chance to bow with them. When it rained, the guides handed out ponchos, and rerouted us so we could reach shelter sooner.

The hospitality of Theatre Y’s ensemble extended to our physical comfort. During our frequent stops, the actor-guides found shade for the participants, offered us seats, and even provided several snacks and chilled water. The four-mile North Lawndale route was flat and even and appropriate for all members of our group, which included a preschool-aged child, several retirees, and an actor who performed from her wheelchair. (That being said, I was very glad that I had come ready with sun protection, my own snacks, and a pair of comfortable shoes. The trek may not be strenuous, but it is still physical exertion. By the end of the tour, the group was visibly worn, almost as though we had all had “a long day at the beach,” to quote my guide.)

Admittedly, between conversations and actor-led activities, North Lawndale itself felt secondary, more of a staging ground for the performance than an integral part of the piece. While the performance encouraged the participants to appreciate little miracles in the physical environment (a small red berry, a hidden mural) it glossed over a lot of the basic elements of North Lawndale’s history and culture. Some of this disconnect may have been situational: neither Goddess nor my actor guide were North Lawndale locals, and most of the Camino experience centered around conversations between us three. Regardless, just for context’s sake, I would have appreciated it if the whole group was given the sort of basic information that might be mentioned in a walking tour. Without that context, I found it harder to appreciate the significance of our stop at the MLK legacy apartments or Stone Temple Church. Even the performances lost a little something. “I’m from Lawndale,” proclaimed Prince Roc with pride as he strode across the stage of a community garden. I wish I could say I knew what that meant.

I want to be clear that these gaps in context in the were not for lack of research or sensitivity on Theatre Y’s part. From conversations with actors, it was clear that Theatre Y had set out to center community voices. Each company member spent almost a year designing each one of the twelve Caminos, building relationships with community leaders, and collaborating with them on itineraries. However, without context, it was too easy to question the optics of a white-led theatre company leading a joy-centered experience through an underprivileged, predominantly Black neighborhood. It might have been helpful if Theatre Y was more transparent about their process during the presentation (how they chose the route, the community significance of the sites, etc.).

Regardless, the six-hour Camino through North Lawndale was a radical exercise in presence, wonder, and community. During the shared pizza dinner, participants were conversing freely and branching out from their assigned groups—all without an actor’s prompt. Indeed, when we were invited to reflect upon the Camino for the group, two women announced that they had already made plans to meet up later to take a youth-led tour of North Lawndale with My Block, My Hood, My City.

Theatre Y’s YOU ARE HERE: The Emerald Camino Project was a remarkable piece of post-isolation theatre, perhaps because of the way it centered community, spontaneity, and exploration—the very things that were impossible during quarantine. Coming out of a year-and-a-half of mourning, the performance’s emphasis on joy was especially refreshing.

Yet the joy that Theatre Y offers is not the joy of distraction. Instead, the Camino challenged its participants to live in the present moment of gathering, to explore our physical environment and find wonder in the little things: the deep brown eyes of a stranger, a mural anointing the side of the Firehouse Community Art Center, how smooth and cool a sprig of wild wheat feels beneath your fingers.

The Emerald Camino Project runs until September 26th at various neighborhoods around the South and West Sides of Chicago. Click here for tickets and a detailed schedule of performances.