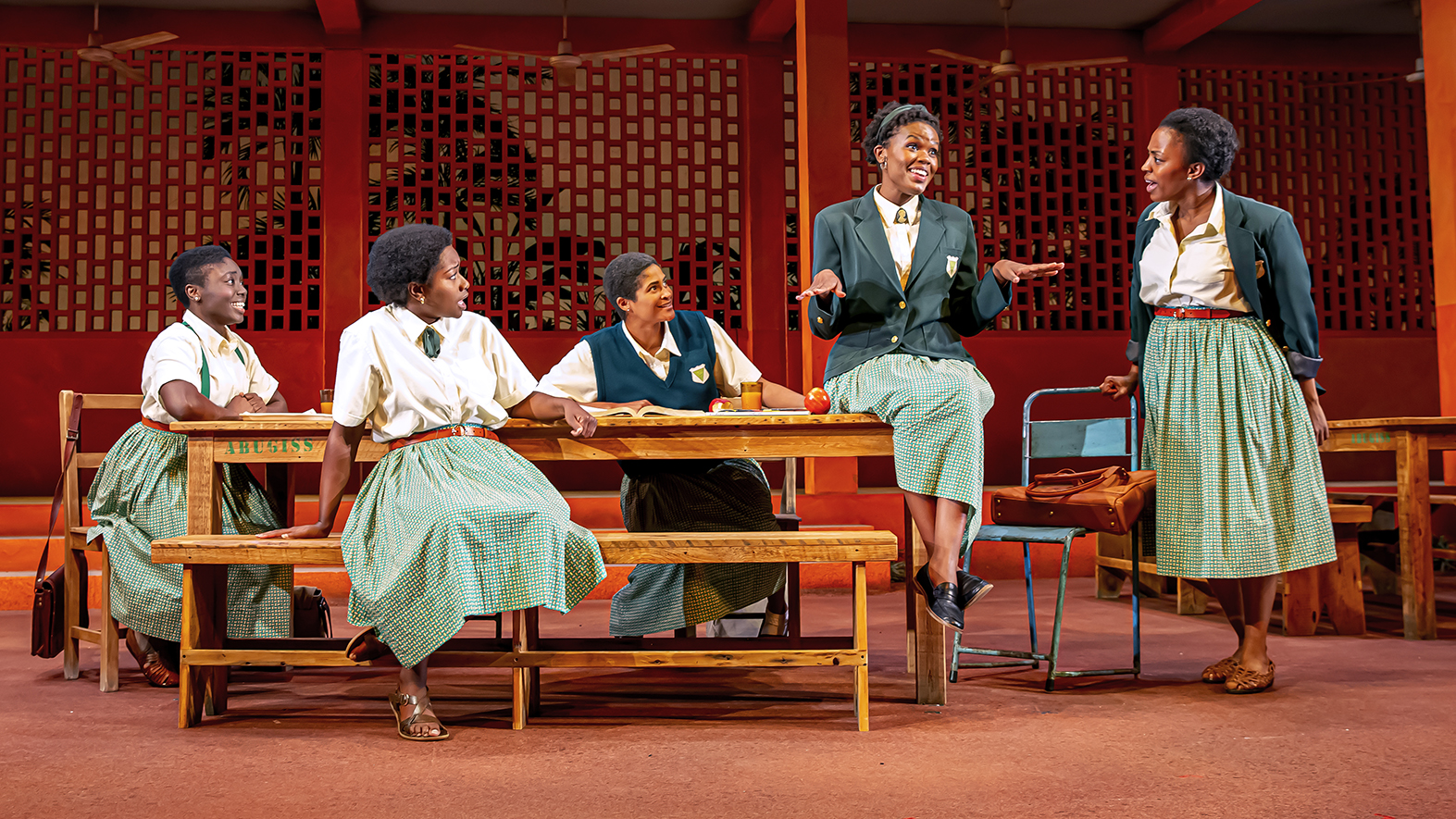 Firstly – there is something to say about not having men on stage. Often in the theatre the moral compass of the show is seen through a cis-male perspective. Even when the majority of the cast is women, they often only go on to talk about men. Don’t get me wrong here, this band of adolescent young women have their fair share of boy crazy moments – mostly over Bobby Brown – but the play in its broadness dares it’s audiences to dive deeper.

I caught the 90 minute production on a Saturday, and was immediately delighted by the sheer number of black faces that were masked and eagerly clutching their e-tickets in the lobby. The mere excitement of being back in the theatre was apparent as patrons found their scattered seats around the theatre. A first glimpse of the magnitude of the scenic design by Yu Shibagaki is an immediate draw to the production. The two-story secondary school stretches high to the proscenium, and Shibagaki’s use of texture and shapes gives an authentic Ghanaian style. As the play begins, the scene glows as the lighting design by Jason Lynch impeccably lands the African sun on the Goodman stage.

The plot is quite simple; a group of Ghanaian school girls aspire to be chosen to be Miss Ghana 1986 in hopes of competing in the Miss Global Universe Pageant. Shifting furiously between hilarious commentary on the African perception of American consumerism and the very blistering reality of the beauty standards that haunt black women — such as hair texture, colorism, eating disorders and generational trauma — Bioh and Brown have intricately woven together a dynamic production that feels equal parts joyful and soul-stirring.

Though all the girls are competing in the Miss Ghana pageant, in true pageant fashion, one girl oversteps everyone’s boundaries in her pining for the crown. That girl is Paulina Sarpong, played by the very capable Ciera Dawn, making her Goodman debut in the very demanding role. Through Paulina’s transparent struggle with self esteem we can see why she is so likely to project her fears of losing the crown onto her comrades.

One such comrade is Nana, played by the extremely versatile Ashley Crowe, who Paulina routinely body shames into starvation. We learn that Nana is underfed at home and therefore overeats at school, which often lands her in detention. Crowe successfully navigates the delicate role with ease, and the audience is prompted to ask themselves the question of who is in the right, to heart-wrenching results.

The play goes on to further show how the beauty standard rabbit hole goes deeper not only for women of color, but women of a certain darker color – as is seen when Paulina is suspected of, and ultimately caught using, skin bleaching creams. Paulina’s anxieties are then exacerbated by the arrival of a lighter skinned classmate, Ericka Boafo, played effectively by NYC based talent Kyrie Courtier, also in her Goodman debut.

The feud between Paulina and Ericka is the catalyst for the conflict of the play, but much of the action is soaked up by a power hungry recruiter for the pageant (and former Miss Ghana 1966), Eloise Amponsah. The former Miss Ghana boasts about prestige and honor for this group of girls while concealing her own ambitions of taking over the pageant. It is through her relationship with the girls, namely Paulina and Ericka, that we see the transference of generational trauma between women of color. Lanise Antoine Shelley bravely walks the line between camp and cruelty in her brilliant portrayal of Amponsah, turning a seemingly two-dimensional character into a layered emotional feast.

Rounding out the impressive cast of actors are Adhana Reid and Tiffany Renee Johnson, also making their Goodman debuts. Reid’s unmistakeable joy as Ama radiates to the balcony while Johnson’s performance as Mercy is steadfast and thoughtful. Returning to the Goodman are Adia Alli, who plays Gifty, and Tania Richard as Headmistress Francis. Alli’s physical comedy is a great asset to the ensemble, and Richard is often the much needed anchor of the show. Together this ensemble of women packs one hell of a punch.

However, after the hair has been pulled, secrets have been exposed, a winner has been revealed and friendships have been torn apart… the audience is left to wonder if anyone has grown or changed. We still ponder the same question of who is in the right —  and if the answer is no one, then we yearn for a sense of perspective as to how far we have really come. And if the answer is that we haven’t really come that far, then I will continue to feel how I felt when I left this show: in awe of the beauty, power and magic of black women… but in the end wanting way more for them.

In the play it is said that “education is the only gift no one can take away.” School Girls; Or, The African Mean Girls Play is an education on the deeply rooted issues facing young women of color today, and a testament to what is possible when we try to identify worth in all humans. My hope for those of you who see this play is that you will continue to support the incredible work of black artists and black women — not only until August 29th when School Girls is slated to play, but in perpetuity.

School Girls; Or, the African Mean Girls Play runs at the Goodman Theatre until August 29th.