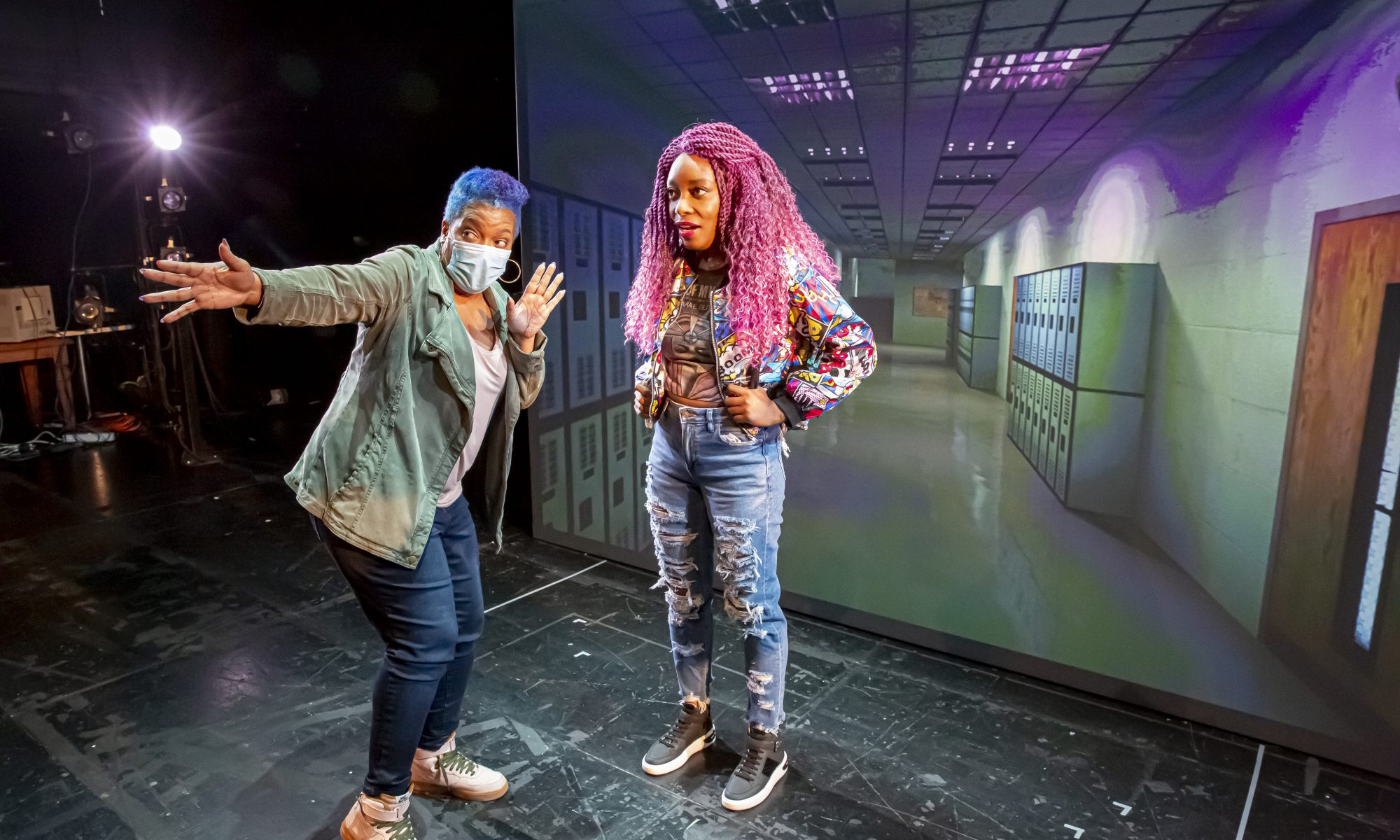 Did I mention it’s all live?

Director Lili-Anne Brown directs this multi-camera hybrid piece, which opens with a raucous rock number titled “I Hate It Here,”  special shoutout to the Beyoncé-styled rap interlude Behzad Dabu gets in the Goodman stairwell. The show eventually opens into several vignettes that cover the struggles and victories of various people living through the pandemic.

Originally produced as a radio play at Studio Theatre, the characters in I Hate it Here range from high schoolers, to activists, to a deranged manager of That Chicken Place played by a wild-eyed and power-pointing Gabe Ruiz, to individuals who lost loved ones to Coronavirus. When asked what kind of a world we live in where folks want to wear masks, That Chicken Place manager replies: ‘Must be the world of Harry Potter and the witch who’s ‘bout to find out cause that’s not where I’m from!”

I never get tired of the turns of phrase Ike Holter uses to read folks. A read implies there is information between the lines, and you could fill a book with the one-liners and nuggets of wisdom used throughout this piece. In a segment entitled “F*ck that place,” Behzad Dabu spins an impassioned monologue that reminds me of the old great Spike Lee characters about a place he used to work. “The building? F*ck the building. Buildings aren’t people buildings are buildings made by people and the people that made that building are evil as fuck so they can snack on limp d*ck pita chips until paying my unemployment makes them run out of business, and i don’t give a fuck and you know this!”

This may not be how you would say it, but boy oh boy is it the truth. Theatre has adopted a colonialist settler mind set, where we think the spaces we occupy are more important than the colonies of artists that populate them. Holter’s monologue is a welcome reminder that human beings are more than the bricks that make up a building.

Other segments cover equally important themes, The Bystander gets into the weeds about police brutality, questioning our need as a society for the perfect victim. It is a meditation on living with trauma as a black person, and how even the people who almost killed you carry so much of their own trauma they can’t even see you. It demonstrates the principle that hurt people hurt people, and offers an artistic interpretation of the inner turmoil and dysfunction of the racist mindset. Kirstin Fitzgerald does incredible work here, and is often transported by Holter’s text in delicious and esoteric ways throughout the piece. Her scene partner, up and coming star Patrick Agada, brings his own version of a racial reckoning to this wonderfully sinister scene in a full suit like a specter of justice.

Sydney Charles portrays a character named Mrs. Marcy, an older Black woman on her work break who is vaping and lamenting the fact that we make ignorance hereditary. Holter brilliantly identifies that we don’t pass on our history because the trends kids follow repeat and recycle every 20 years and they don’t even realize. “If they don’t know to ask, and we don’t tell them, then how will they know what to ask?”

For an 80 minute play, there is so much language, and the performers are running it and making it their own. It’s wonderful to see our tried and true faves, and vets of Holter’s language like Sydney Charles and Gabe Ruiz preach this language after so much time. Charles tackling Holter’s work, highlights how much Holter’s text truly sings. The breath control needed to run his text is impressive, and the cast largely lived up to the challenge, especially considering I was reviewing an invited dress. Jayson Brooks, whose work I am less familiar with, still feels like he is in the same show, and carries a gorgeous moment where he must reckon with what happens when your protests don’t produce justice. Jayson’s portrayal of Wash in I Hate it Here reminds us we can only come together as activists when we realize that the work never ends, and that we must endlessly mind the work we do.

The style of production, and style of presentation, I think will prove groundbreaking. This production feels like a culmination of the tactics used by smaller companies like The Story Theatre, Jackalope, Sideshow, etc to make virtual work engaging. The Goodman and director Lili-Anne Brown – whose directing chops were sharpened in Chicago storefronts before moving to the regional scene – were able to collate virtual elements such as the preshow slideshow, the countdown to the show, the director’s interview, and direct to camera live address to create a cohesive and polished new style of theatre. It’s a landmark moment for the Chicago community as a whole to celebrate how we’ve clawed our way through virtual theatre to create something accessible that can continue even when we’re in person.

The production itself contains Brown’s unique and fun easter-egg style of directing – I think of the CTA uniforms in her production of the Wiz at Kokandy – but her ability to pull our focus with the camera means the entire audience is in on the secret. Scene names are integrated into props and the sets, one even starts printed on the label of a whiskey bottle! Some sets are complex, some are drops and others are simple black, but the show does feel cohesive despite the way it traverses through worlds.

A delicious easter egg in the show is the appearance of a fan-favorite and founding hero of the Holterverse audiences will be delighted to see close out the piece. I was fortunate to be at invited dress, so I can’t even tell you yet who the surprise actor is!! The shot is gorgeous, as they deliver an earnest monologue straight to camera, getting closer and closer but never quite focusing on the performer, creating an engaging effect. I refuse to spoil anything about this catharsis, you’ll just have to watch tonight for yourselves! The special guest really cements the Saturday Night Live, anything can happen vibe of the show, as well as the raucous ending.

I Hate It Here is an incisive, gritty, and fast-paced celebration of living in the present, creating a clear window of hope for the future of live performance. The Emmy-nominated, WGA winning playwright Ike Holter has returned to slay Chicago’s stages, proving himself once more to be one of the most prolific hitmakers of the new American Theatre.

I Hate it Here runs July 15-18th, reserve your tickets at the Goodman website.

Bias Alert: Regina Victor is Black and an artist in community and thus knows many of the people in this article, no relevant recent projects.