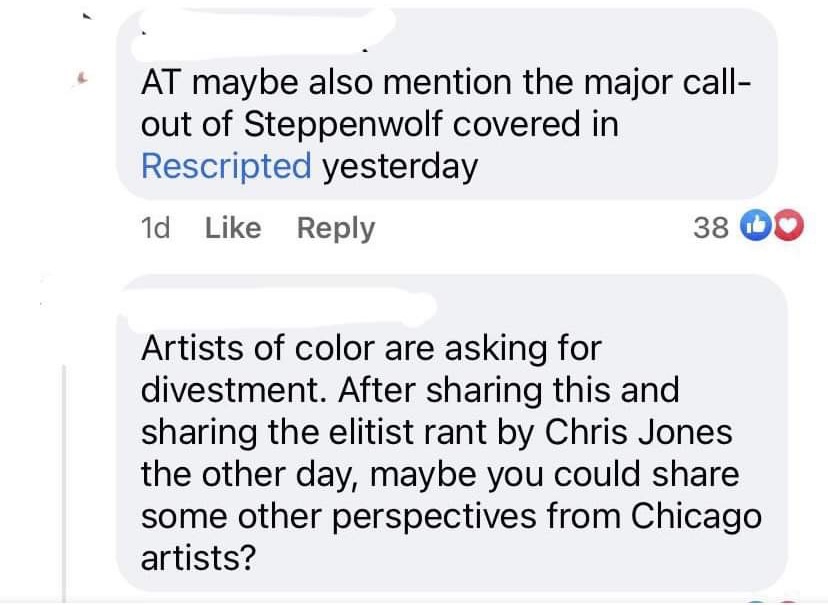 I am not a journalist nor should you settle for me.

On April 15th, Lowell Thomas released a statement citing his reasons for his resignation under duress at Steppenwolf and the theatre community shared it across all social media platforms. No major media outlets paid attention. Two weeks later, on Tuesday April 27th, I compiled an article that included large excerpts of artist statements that had been made individually by Lowell Thomas and Isaac Gomez. The only person who amplified it was Chris Jones, who said Rescripted, aka I, was calling for divestment and dissent, a mischaracterization of the piece as a whole. The hot take is that I am apparently, inciting a riot (I am not). We will unpack how dangerous this is to say about a group of people of color another time. 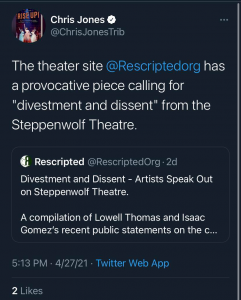 On Wednesday April 28th, the Chicago Tribune and American Theatre both covered Steppenwolf’s season announcement instead. The cover photo of this article is the comments section of the season announcement post, asking: where was the coverage of the artists’ voices? Yesterday, April 29th American Theatre shared Rescripted’s piece on their Facebook. This is a normal pattern for me, I often wait to see if journalists or new sources will responsibly cover a piece before I dive into the muck that is the truth on my own. I am not alone in wanting journalists to cover the same topics that glaringly need attention:

I agree with this criticism wholeheartedly, I am a neurodivergent writer who has made an occupation out of challenging white linear time and history. Journalists should be providing an even-handed, well-researched perspective to express the artist perspectives in a responsible context to their readers. As we have seen, this just doesn’t happen. So here I am.

This is a direct reflection of my entry into criticism. There is only one nationally respected and “accessible” theatre program for training critics in the nation that is not an undergraduate or graduate program. It is the National Critics’ Institute, directed by Chris Jones through the O’Neill Center. Therefore, by the time I became interested in criticism I already knew I was interested in a different theoretical and ideological approach to critiquing art and culture. By the time anyone thought to encourage me to apply to the NCI, Jones had been a guest lecturer at my own critics training program that I created so others could have opportunities I didn’t. Additionally, I had finally challenged Jones on a piece he wrote that I thought was ableist, which American Theatre magazine initially shared, then removed, and then followed up with a lengthy e-mail from AT’s editor, chastising me for writing it.

You get the idea. I did not have an opportunity to educate myself beyond the sweat equity I have put in on my own.

When I first began my career, I occasionally referred to myself and allowed others to refer to me as an arts journalist. As I continued to explore the field and the many terms folks use, I have settled on cultural critic. Rescripted itself is built off of the idea that everyone is an expert on their own experience, and therefore I am an expert on the experiences of culture I have chosen to cultivate in my own life. I know everything you need to know about Beckett, but please don’t ask me about Brecht. Basquiat yes, Beethoven no, got it? Rescripted does not have the proper resources – time, lawyers, finances, among others – to investigate stories in the thorough way a journalist would be expected to do. I don’t have time to work the case between my other 25 jobs as a working artist, but I do want the stories to get told.

I started this publication because there was a vacuum of equitable arts coverage in Chicago. It began out of necessity, but mostly the hope that I would inspire other journalists. The intention was to show there was an interest in writing about and by the artists themselves, rather than the objectifying criticism we have been subjected to. The hope was that Rescripted would bridge the gap between the critics at top papers and the artists whose largest platform to speak up is often social media, or Medium.

In many ways we have been successful. We have pressed issues that others remained silent on, most notably the sexual harassment at Roosevelt University, and the mass artist resignations that led to then-Executive Artistic Director Erica Daniels’ resignation. One exception was Onstage Blog, which continues to cover Chicago news despite being a New York publication. Major publications were slow to cover these stories, waiting until they were inevitable, if they covered them at all. The Chicago Reader never covered Erica Daniels’ resignation. The Tribune covered the resignation of the playwrights ensemble at Victory Gardens, with the Reader following three days later.  By the time the artist-led protest happened outside Victory Gardens last summer, Rescripted had published two stories amplifying the artists who were speaking out against Victory Gardens, and would publish two more. We republished statements the artists made because again, we do not have the resources to go interview them and get the institutions’ side, the way proper journalistic practice would require. We served our purpose.

The day of the protests, I had to personally message a selection of our local critics with whom I had a rapport and ask them, please, to get down there with me and cover it. I believe the only person who showed up to interview people was Chris Jones, who published an article about it. Check out this text from another Top Critic in the city, name redacted. It really gives you a sense of how much they care. 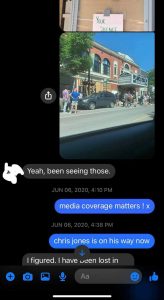 You should not settle for me. I am doing the very best I can to do what I am qualified to do: give the opinions of local artists as cohesively and unadorned as I possibly can, to pique the interest of the public and the publications that claim to cover it. Yet even when readers are begging you to cover the dissent, the best our critics can do is retweet the piece and misrepresent it to say Rescripted is calling for divestment and dissent at one singular institution?

I wish you could see my inbox. I wish you could see the stories that remain unheard about Steppenwolf and many other places. They want to write to you, but they know you don’t care. Or maybe they do tell you, and you don’t believe them. Well let me tell you the artists who have been calling me asking me to report on their lives, their causes, deserve better. Please, give them, give me, a reason to believe in you again and cover these stories that are clearly of public interest. Otherwise, we’re going to have to turn this b*tch into a multimillion dollar media company out of spite. I hoped I would be obsolete by now, a bridge to better coverage.

I told you, I’m not a journalist. I am, however, a Black trans person hell bent on being able to live equally and fairly in society and therefore I will drive this to the finish line because my life depends on it. Whenever I uplift a collective opinion that goes against the grain or directly demand our safety and inclusion I worry about destroying my career, but I have no choice but to act, for our survival. So, do you really want to feel that kind of heat from me, from the society that is trying to call you in? Or would you rather do your job? Outwrite me, I’m begging you.