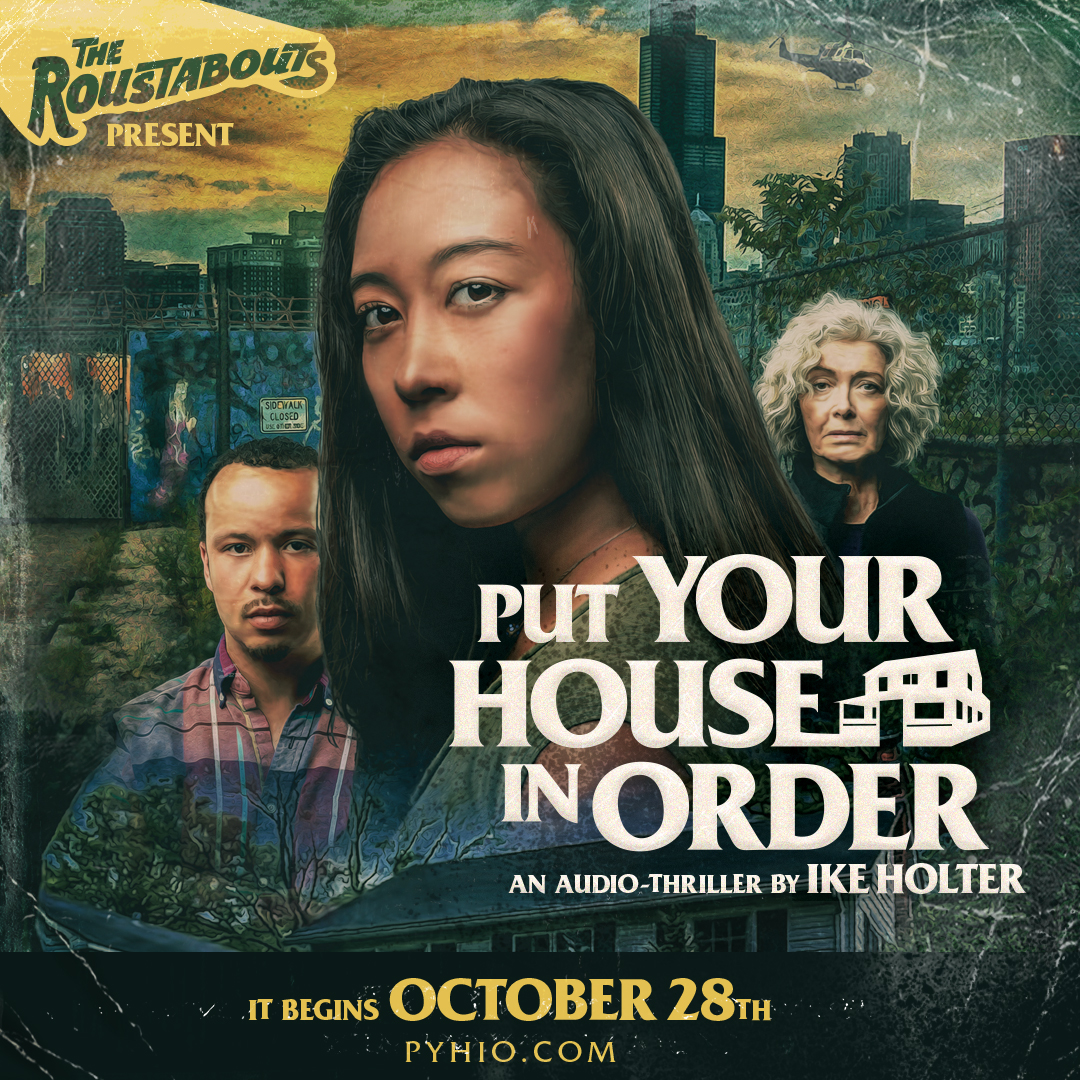 It’s spooky season and Chicago playwright Ike Holter is delivering some delicious horror content via The Roustabouts for your pleasure this Halloween. The Roustabouts have announced the upcoming release of their first Audio-Thriller available for streaming and download. On October 28th, at 8pm, the creative arts ensemble will drop the world-premiere production of Put Your House In Order by Ike Holter to be available from just before Halloween until right before election day, closing at 11:59pm Central on Monday November 2nd. The play will stream for free, and suggested donation is $10 at www.PYHIO.com.

Chicago audiences may recall Holter’s play, Put Your House in Order, from its hit run at Red Orchid Theatre in 2017. Put Your House In Order is a romantic comedy / horror thriller following a young Chicago couple whose first charming date spirals into a chilling race against a sinister invading force.

Playwright an screenwriter Ike Holter is known for his ambitious seven play Rightlynd Saga, Hit The Wall, and for his work on FX’s “Fosse / Verdon”. He is a founding member of The Roustabouts, The Inconvenience, and is the proud recipient of the 2017 Windham-Campbell Literature Prize for Drama and the 2020 WGA for adapted work.

“Everything right now is scary as hell. There’s an election right around the corner and this awful virus is climbing in numbers every single damn day. ‘Put your house in order’ is a story about people in a pretty intense time confronting fears for 90 minutes; it’s a fun, weird, wild ass ride and I think it will be a legit release.” – playwright Ike Holter.

Gus Menary is the Artistic Director of Book-It Repertory Theatre in Seattle, Washington. He served as the Artistic Director of Jackalope Theatre from 2015-2020. He is a founding-member of The Roustabouts and was the Theatre and Music Programming Director for The Inconvenience. He has produced and directed numerous world-premieres including Holter’s Exit Strategy, The Light Fantastic, and Put Your House in Order.

“In the midst of everything, the choice of audio was a path forward. A way to keep making, creating, doing something. It’s been interesting to work remotely, together, but a real lifeline to that alchemy. It’s a stone-cold classic. It’s a horror. It’s a rom-com. It’s parable. It’s who we are, staring through a glass darkly at Halloween in 2020. And it’s Evanston, so pretty spooky, obviously.” – director Gus Menary.

Steve Labedz is a composer and sound designer based out of Chicago. Their other podcast work includes The Moth, Make Believe Association, and How I Built This. They are a proud company member with Jackalope Theatre and Red Tape Theatre in Chicago.

Aaron Stephenson (Original Music) has worked on over 40 Steppenwolf Theatre Company productions as a design assistant and resident audio technician.

Cast includes Tony Santiago as Rolan, Aurora Adachi-Winter as Caroline, and Janice O’Neil as Josephine, all reprising their roles from the original production.

The Audio-Thriller will be available to the public to stream beginning October 28th, 8pm at www.PYHIO.com