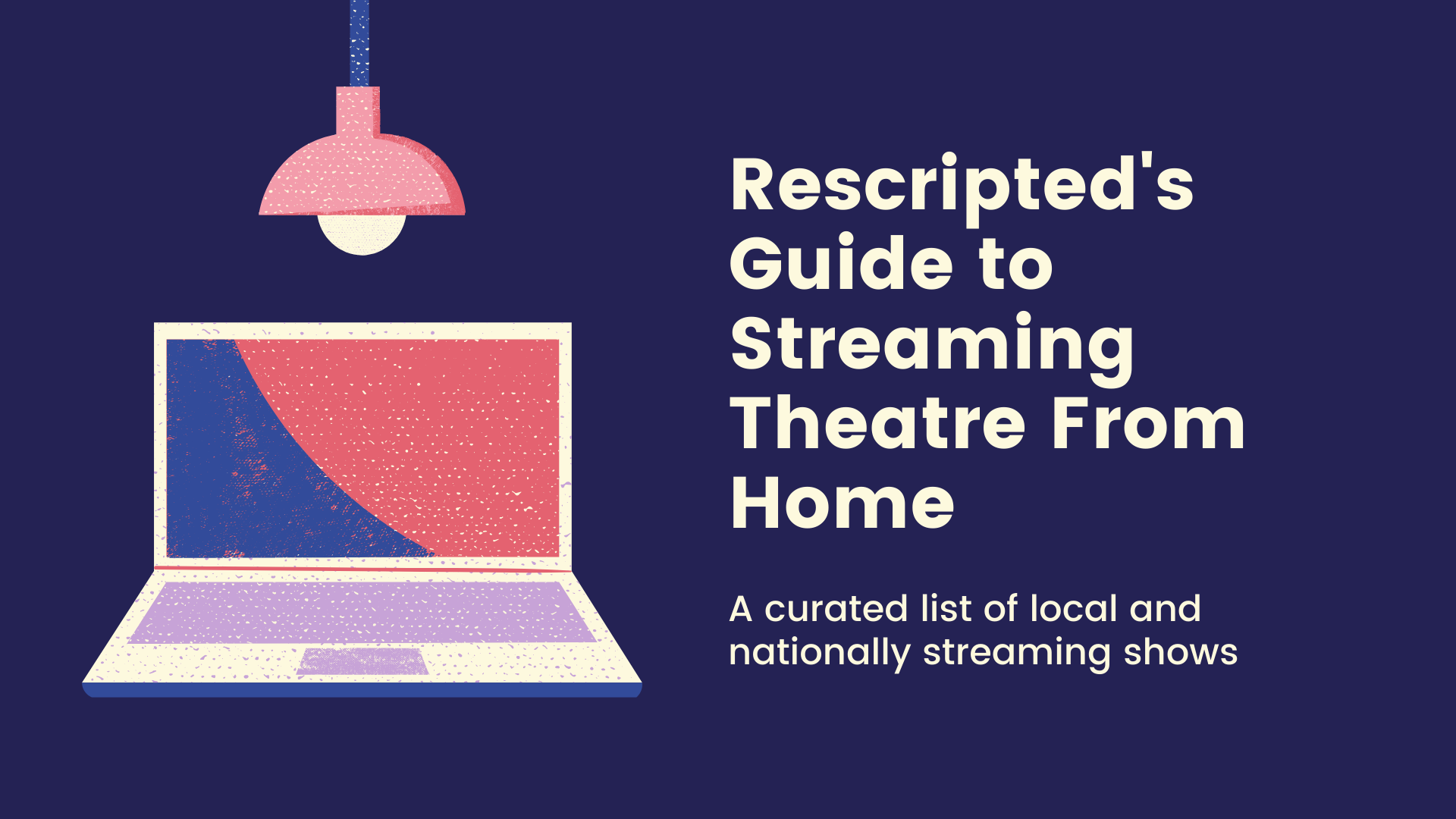 There are a lot of things that we currently miss about the outside world — writing in cute coffee shops, hanging with coworkers, the lakefront — but perhaps the most gutting thing for us artsy folk is the fact that all theatre in the world has pretty much ground to a screeching halt. We still have movies and TV, of course, but there’s nothing else quite like the breathless thrill of a hard-hitting story that is happening in the same room as you.

Luckily, however, there are plenty of theatres across our nation who have managed to make their art available despite shuttering their doors, and so we are happy to provide this handy list of streaming theatre productions. NOTE: We’re going to limit this list to streaming theatre that is either newly available because of the pandemic, or was recently made free because of the pandemic. We will also make regular updates.

Goodman Theatre
The Goodman Theatre provides streaming for their production of School Girls; or, The African Mean Girls Play. Tickets begin at $15. Once you purchase a ticket, you’ll receive a link to view it within 24 hours. It’s available to watch once within a two week window and tickets can be purchased until April 26.

Theatre Wit
Theatre Wit is doing remote viewing of their production of Teenage Dick, a modern adaptation of Shakespeare’s Richard III set in a high school. The fight choreography was done by a friend of mine! On the night for which you’ve bought your ticket, you’ll be given a secret URL to a previously recorded video of the performance. The show closes on April 19th.
EDIT: Theatre Wit has extended digital performances of the show until May 3rd!

Otherworld Theatre
Otherworld Theatre recently put up their most recent Improvised Dungeons and Dragons night as a live stream on YouTube! Otherworld has always had a very robust internet presence; more of their content can be found on their YouTube channel.
EDIT: Since first writing, Otherworld has also added several filmed versions of past productions on their Patreon, including PickleRickicles, Medusa Undone, and (ironically enough) Corona.

Black Button Eyes Productions
Black Button Eyes Productions have launched a video/reading experience. Masque of the Red Coronavirus takes inspiration from an Edgar Allar Poe poem and news articles. When visiting the above link, text appears with links that lead to recorded performances and dialogue. If you’re 18 or older, go down this rabbit hole.

Prop Thtr
Prop Thtr’s glorious reckoning, I Am Going to Die Alone and I Am Not Afraid, is streaming now. This devised work recounts a furious presentation of the Holocaust intimately performed with a punk score by Alec Phan. Catch it now on Vimeo if you missed it this past fall.

Pride Arts Center
On April 16th at 7pm (tonight, as of this writing), Pride Arts Center will host a live virtual reading reading of Terrence McNally’s play Mothers and Sons. Tickets are $10 and can be purchased at their website!

The Passage Theatre
Between May 1st and 10th, The Passage Theatre will stream a videoconference version of their cancelled production of All-One! The Dr. Bronners Play. If you’ve ever wondered about the history of that eccentric, surprisingly verbose shampoo bottle with all the bible verses on it, this is the play for you! Tickets are pay-what-you-can. On May 1st, there will be a live Zoom talkback with the playwright and director following the reading.

Lookingglass Theatre Company
Lookingglass Theatre is launching a wide variety of free online programming, including a podcast analyzing the role of theatre and storytelling (the first episode is about Her Honor Jane Byrne, a fantastic show that I saw before it closed), free 15-minute theatre workshops on Tuesdays, online classes for kids three times a week, and videos of music and poetry from various ensemble members.

The Spongebob Musical
I couldn’t find good information on whether this was going to be released before the pandemic happened, but you know what? I’m counting it. I had the honor of seeing The Spongebob Musical during its Chicago trial at the Nederlander, and not only is it absolutely delightful, but it’s now available for streaming. It’s the most visually inventive piece to head to Broadway in a good long while.

Metropolitan Opera
The Met Opera is streaming a different one of their old operas every day. As of this writing, they are in the midst of Wagner Week!

National Theatre
London’s National Theatre has launched National Theatre at Home. Every Thursday, stream a different, free performance on YouTube for a week. The first showing will be on April 2 with One Man, Two Guvnors starring James Corden. Check the schedule to catch your favorite or discover something new!

Hampstead Theatre
London’s Hampstead Theatre has announced streaming for three of their past performances. With recent success streaming their production of I and You on Instagram, you can catch Mike Bartlett’s Wild now until April 5, Beth Steel’s Wonderland from April 6-12, and Howard Brenton’s Drawing the Line from April 13-19. View for free on Hampstead Theatre’s website or on The Guardian.

Feinstein’s/54 Below
54 Below, a beloved NYC cabaret venue, will stream past concerts for one night only on YouTube with #54BelowAtHome. From now until May, look forward to performances from Bonnie Mulligan (Head Over Heels) and Natalie Walker (Alice By Heart, Twitter goddess) and Alice Ripley & Emily Skinner (Side Show, anyone?). You can also tune into specials like celebrating Mel Brooks and Legally Blonde!

The Catastrophic Theatre
The Catastrophic Theatre, in Houston, Texas, just released their full production of The Hunchback Variations on YouTube. Written by local Chicago playwright (and former teacher of mine!) Mickle Maher, it’s a lovely treatise on the artistic impulses we all share, and the wisdom of indulging them.

Geffen Playhouse
Geffen Playhouse launches Geffen Stayhouse. Performances of Long Day’s Journey Into Night (with Alfred Molina and Jane Kaczmarek), Thom Pain (featuring The Office’s Rainn Wilson), and The Lion are available to stream through a 30-day free trial with BroadwayHD. BroadwayHD offers hundreds of additional taped performances from Broadway and beyond. Geffen’s production, Letters from a Nut, can also be streamed via Amazon Prime.

Alley Theatre
The Alley Theatre, in Houston, has tickets to stream their cancelled production, 1984. Purchase before April 12 to view this show for a week on Vimeo for $20. Escape one terrifying reality and jump into another!

Signature Theatre
Signature Theatre, based in Arlington, VA, offers streaming for Easy Women Smoking Loose Cigarettes. Limited tickets are available and the video is available to view until April 12 at midnight.

Alliance Theatre
The Alliance Theatre, based in Atlanta, provides streaming for two of their TYA productions. Naked Mole Rat Gets Dressed: The Virtual Rock Experience has tickets beginning at $5 and is available to stream until April 12. In My Granny’s Garden is available to view for free along with an at home activity guide.

Royal Opera House
The Royal Opera House offers streaming of past productions. Every Friday, a new one is released with Mozart’s Così fan tutte coming this week. Stream with a free thirty-day trial on Marquee TV or their Facebook and YouTube pages.

Bandstand
Playbill hosts a live stream of the Broadway production of Bandstand. Starring Laura Osnes (R+H’s Cinderella, Bonnie & Clyde) and Corey Cott (Newsies, Gigi), it follows a band formed by a group of veterans navigating their lives post-WWII. The performance is available to stream Friday, April 10th until Friday, April 17th and tickets must be purchased before Tuesday, April 14th.

Soho Theatre
Phoebe Waller-Bridge’s acclaimed play, Fleabag (which spawned the hit series), is coming to a screen near you. Soho Theatre releases footage of Bridge’s brilliant solo performance that was recently released through National Theatre Live. It’s available to stream in the UK through Soho Theatre’s website and on Amazon Prime.