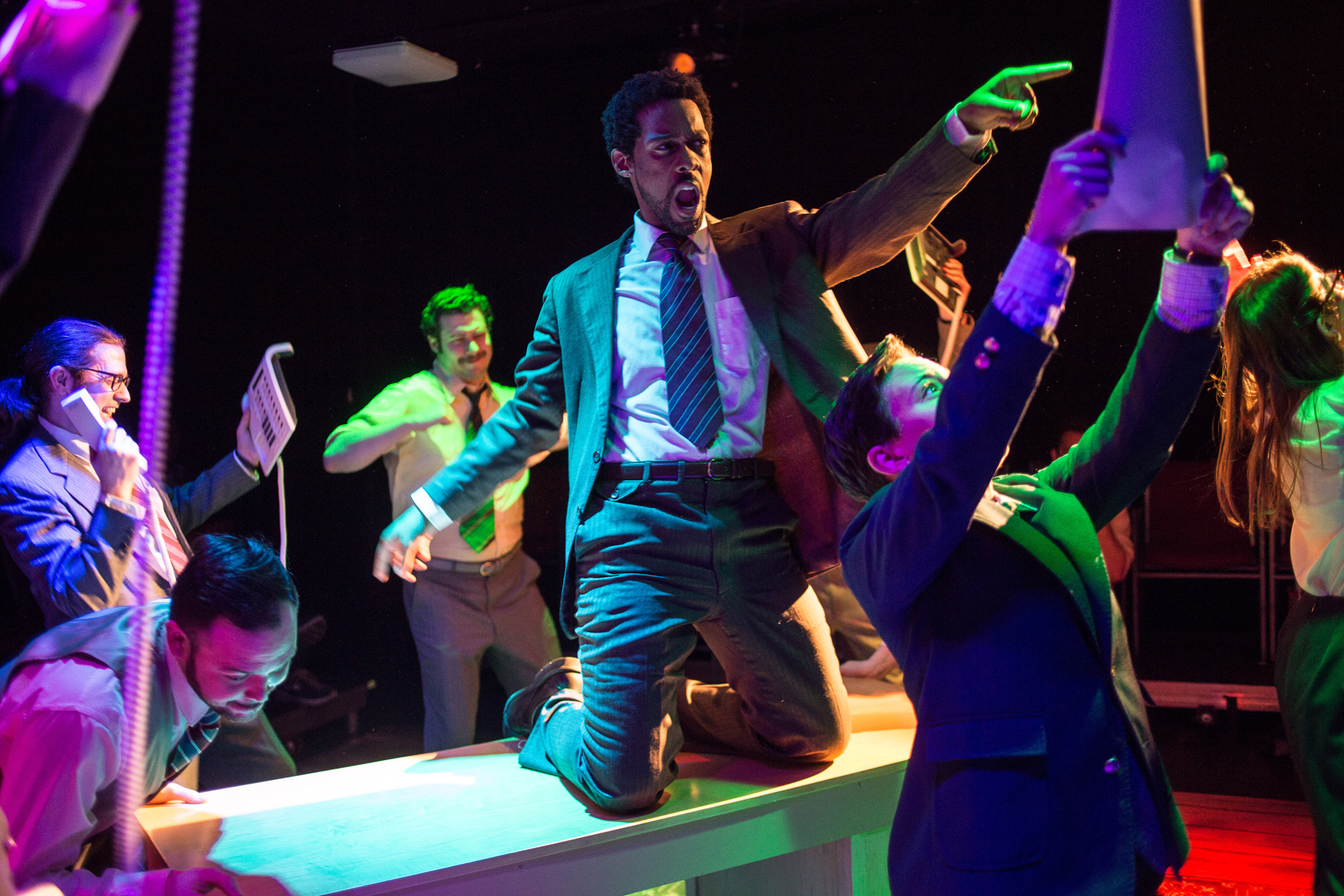 Steel sets her play on the eve of the Latin American debt crisis of 1982. The audience accesses most of the action through John (William Anthony Sebastian Rose II), a credit analyst who has been recently hired at the Latin American division of an anonymous corporate creditor. He begins with the the best of intentions and strives to differentiate himself from his father, Frank (Darren Jones), who served time for running a lucrative scam. Under the tutelage of Charlie (David Weiss) and seduced by the glamor of his high finance career, John slowly loses his scruples. Living by the department motto of “sell, sell, sell,” John and Charlie aggressively sell loans to Latin American countries. Once the credit bubble pops, John must come to terms with the human consequences of his morally ambiguous actions.

The title does not disappoint: the script and the plot of this production are indeed labyrinthine. In a feat of theatrical pointillism, Beth Steel tells her expansive story through a series of vignettes, each of which conveys information crucial to the arc of the action, but none of which have a singular plot. As the play progresses, the action builds to a breakneck pace and the vignettes grow more feverish until the line between reality and fiction is completely smudged away. More often than not, Steel’s writing itself is epigrammatic, laden with pithy statements and word play. Sometimes, it even slides into the sublime of poetry: “Even the ocean sounds false to me,” muses a drunken Charlie as he reflects on his career.

Although the show does not suffer from a lack of talented leads—Rose gives a nuanced presentation of John’s descent into moral turpitude and madness, while Jones is charismatic, sinister, and entrancing as John’s father and biggest fear—the strength of the show lies in its ensemble. Working together under the direction of Davis and the movement team (Spencer Davis and Ben F. Locke), the entire company captures an ethos and atmosphere which, while entirely historical, feels particularly relevant in post-2008 America. Their work shines through in the surreal movement interludes that punctuate the production and build out the atmosphere of certain environments. Particularly memorable are the transitions into the office scenes: a tangle of curly phone cords, papers rapidly handed off from one actor to the next, and a cacophony of voices all speaking over each other.

The design of the show is no less commendable. Labyrinth is staged in the round, on the small stage of Den Theatre’s 2A theatre space. A sense of distinct place is essential to a production whose action spans various countries, conference rooms, and bars, and Broken Nose Theatre builds out distinct, characterized spaces using moveable set items (Therese Ritchie), lighting (Seth Torres), and sound elements (Tony Ingram). Torres’s lighting is particularly masterful. As the show slides from glamour into madness, and the reality of each scene becomes more and more doubtful, Torres’s lighting grows impressionistic, mirroring the action on stage or the internal hellscape of John’s regret-racked mind.

Overall, Labyrinth is a powerful showcase of the ability of an ensemble to break from the confines of naturalism in order to tell a story even more hauntingly true to life.