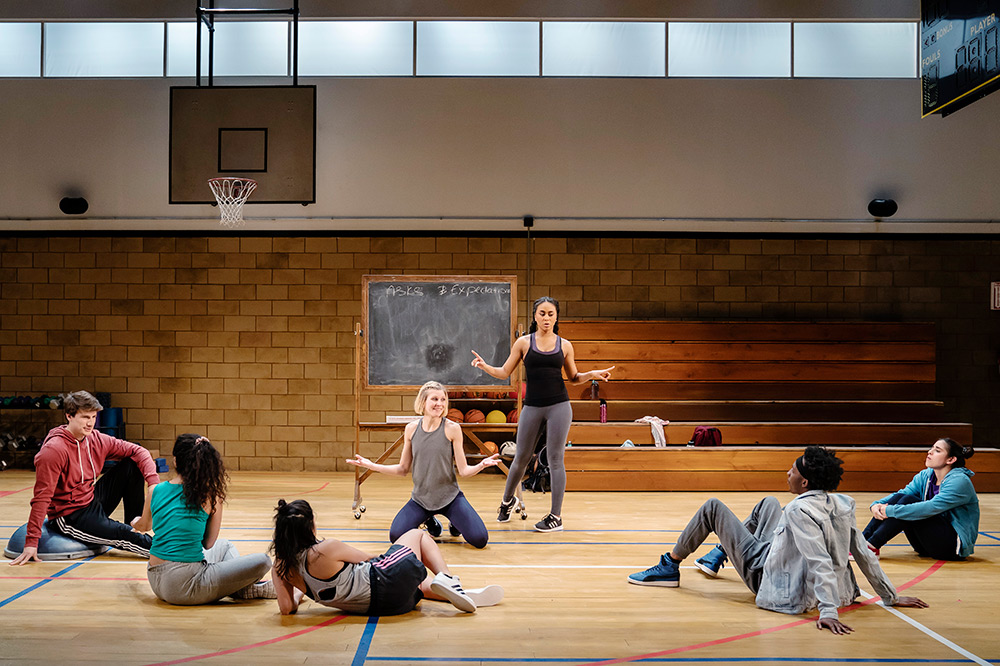 Spunky sorority sister Brandi (Anna Crivelli), the leader of the workshop, is quick to remind us: holding your keys between your fingers is actually not an effective mode of defense. As this play unfolds, we learn that perhaps nothing is. These characters constantly slam up against the futility of their own agency in the face of rape culture and misogyny. Most contemporary sexual assault narratives focus on the victims or the perpetrators, and I so appreciated that this play acknowledged the very real toll felt by the entire community in the aftermath.

Brandi tries to corral the group with healing exercises and empowerment mantras, but as the shy, pigtail-clad Nikki (played by the hilarious and heartbreaking Andrea San Miguel) puts it, “don’t teach us things that don’t work.” Modern feminism can often feel pandering, infantilizing, and exclusionary. When these characters cut through the pinkish positivity, they look around and ask: where is the space for our anger? Our desires? Our shame?

The play makes space for men in this conversation, too. Participating as allies, friends Andy (Ryan McBride) and Eggo (Jayson Lee) show up halfway through the class to help out. They grapple with their own culpability and accountability, as they struggle to express the weight of their feelings under a mask of humor and nonchalance. One particularly moving moment comes when Eggo, alone in a gym, lets loose and dances fluidly and fabulously. Suddenly, through the movement of his body, he allows himself the space for his full self. And it’s gorgeous.

Movement (movement direction by Steph Paul and fight direction by Matt Hawkins) is a galvanizing force throughout the play, and transition sequences with dance and combat help move the story forward with levity and fun. The acting here is uniformly excellent, in part because every character is imbued with such specificity and nuance. The dialogue is genuinely funny and quick, and though the play hinges on realism, these surprising bursts of movement give way to something more abstractly felt.

As we see these women move their bodies, in defense, in dance, and in a stunning and surreal whirlwind of a final sequence, we are reminded how vulnerable we are when standing still. The unspoken responsibility women have to protect ourselves and to protect each other is real, and it is exhausting. By allowing for the expression of that sadness and fear, Padilla gives us something else, too: hope.