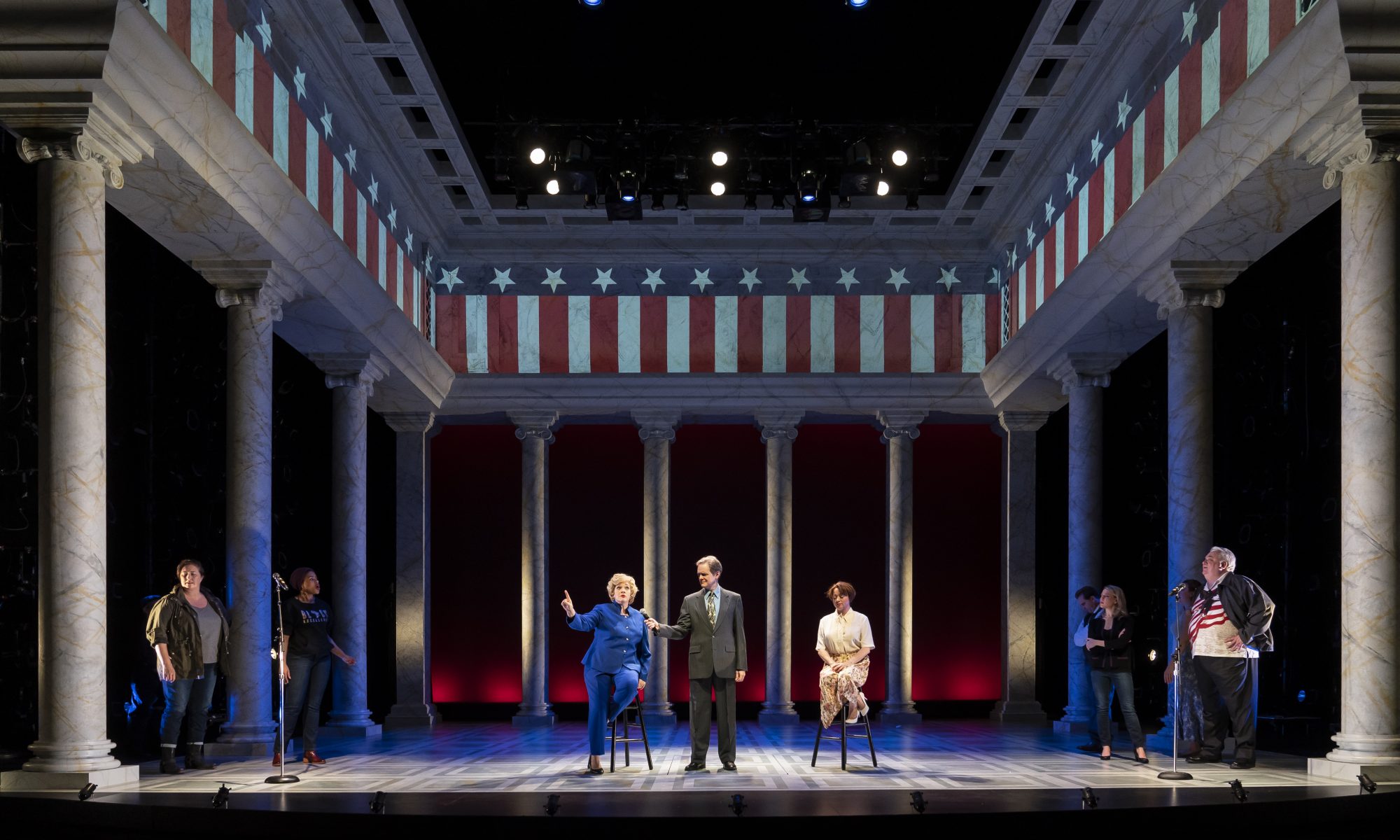 It’s the costume and wig work that visually define, and ease the audience along with, the jumps in time. The costume work by Jessica Pabst is incredible at driving the narratives. The costumes quickly transform into different iconic eras, differentiating each character in ways that the text does not. This was essential in making sure the characters were well defined, since ensemble actors played multiple different roles.

The set, designed by Collette Pollard, towers over the audience with large marble columns as if in a courtroom. Yet this isn’t any normal courtroom; it’s open and exposed, inviting the audience to put aside their “normal” relationship to the theatre. Roe constantly breaks the fourth wall, having actors directly address its audience. This allows the majority of its scene changes to be done visibly onstage. Another admirable choice is that the actors play the roles of costumers and stage managers for visible quick changes, further showing us that the show is both grounded in reality and elevated by fantasy elements — although some of these, like the musical numbers, are more confusing than helpful.

The court case of Roe v. Wade is relevant today, as due to ever-changing reproductive legislation and attitudes, women still feel shamed, ignored, and uneasy talking about abortion. We still debate whether a woman really does have the right to choose without open dialogue, and we take those options away all too often. The show also makes a stance that “the right to choose” can be a complex argument based on moral and religious factors.

However, the narrative is clearly biased in a liberal and exclusionary feminist direction. For instance, Loomer never honestly questions the intentions of wealthy liberal white women in relation to using Norma and other women for their own gain. There are only small glimpses into a more accountable narrative, like in the line “You had money and I didn’t; that was the difference.” It would have been interesting to allow audiences to actually reckon with their own accountability in exclusionary feminism, instead of making conservatives the bigger villain of the story.

This exclusion is one of the biggest flaws in Roe. Today, people of color keep screaming from the rooftop that we are left out of narratives, but this show doesn’t do any better by trying to sprinkle people of color in its script. It instead tokenizes POC characters to relate only to Norma and the other white women around them. For instance, the characters Connie Gonzales and Barabra/Aileen are there only to be related to Norma or to explain to the audience. Connie Gonzales is based on a real woman Norma dated. In this show she has an accent, dutch braids, and is around the same age as Norma, somewhat contrary to her actual persona. The writing in Roe also leaves out important pieces about their relationship that might un-redeem Norma. Unfortunately, there’s not much outside information about the real life Gonzales separated from Norma. She never gets to tell her story, nor was she ever asked.

Barabra, in the show, is a POC character that I could not find in my historical research. She comes out to speak short monologues that explain hardships for Black women, but before the second act her character completely disappears. This type of dimension exists in many of the characters in Roe, but it is only present in the bodies of color onstage. While it may make sense for the audience of the Goodman, it does not reflect how Norma uses and neglect the many women of color in her life. We are never able to grapple with her choices; instead, we are asked to ignore them. Connie Gonzales and her life with Norma was heartbreaking, and a thoughtful inclusion of her character would have been extremely engaging. There were good intentions behind the show, but the show also alters its history to make Norma more likable, not giving the audience insight into who she was.

Of course, the issues of Roe v. Wade still stand in the American landscape, but all I could notice while watching Roe was its lack of coming to terms with exclusive feminism stances. We need to keep asking ourselves as theatre makers: how are the shows we are programming provoking a new conversation? What is our agenda, are we trying to alter history, and who are we really trying to convince?