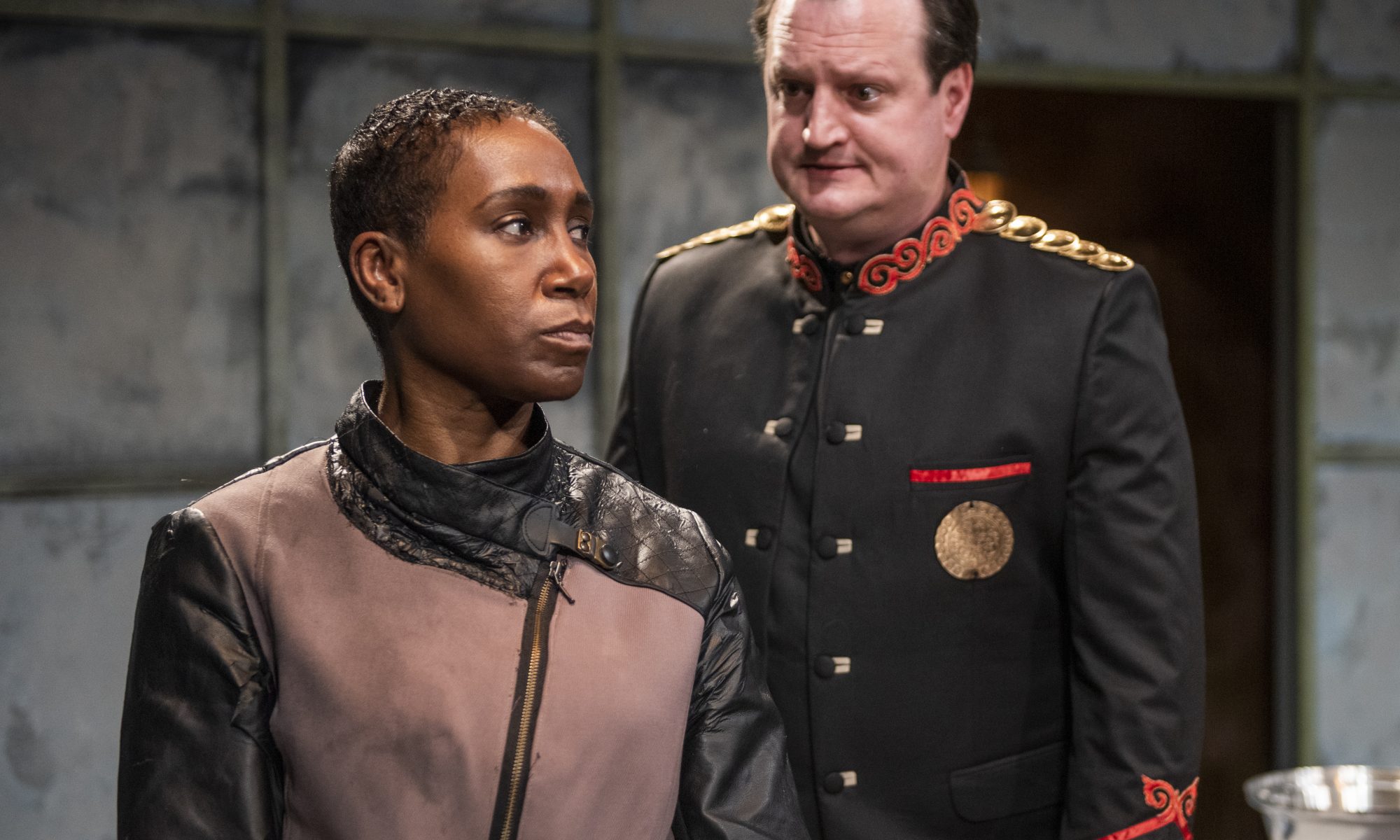 The play begins with a projected slideshow of beautiful displays of food with “You are safe, eat up.” The food then gradually becomes moldy while those words continue to get larger and bolder. The center of the stage is decorated with three handcuff chains; an ominous sign, since I knew that they would have to be used and I dreaded how. Yaeji Kim, as both scenic and projections designer, highlights the dark humor that is peppered throughout this world. The browns and grays of the set meld beautifully with the taupe of the Tasters’ costumes, designed by Rebecca Duff. When the revolutionary Elyse (Shariba Rivers) enters as the new taster, the incorporation of the taupe with the militant black leather foreshadows the way in which being a taster is meant to smother Elyse’s insurgent attitude though the fight is never over for her. When the General appears on stage in a black suit embroidered with red trimmings reminiscent of Kim Jong Un, his purpose in the story is clear. The set and costume design clearly express the stakes of this world, in a way that the dialogue and relationships do not.

We’re introduced to Bianca (Paula Ramirez) as she is talking to her “bump,” establishing the stakes and potential risks of the pregnant taster. We are then introduced to Corrine (Daniella Pereira) an overzealous devotee to the regime. In contrast, Elyse, is the resistance fighter revolutionary, captured and forced to be a taster. Together, these women make up the tasters for the North. The fact that they’re all women tasters means something, but I can’t grasp what that meaning is through this production.

Though the three women share the stage with each other for a majority of the play, it rarely feels as if the stories they share reveal anything significant. They don’t let each other into their lives; they simply talk about them. A third of the way through, something happens to Corrine that transforms the loquacious, overzealous loyalist into a quiet and defeated shell of herself.  Her silence does not seem to affect her other two cellmates until it becomes relevant for a monologue or a plot point. The energy that Pereira brings on stage in the beginning becomes sorely missed as I continue watching. The lack of a bond between these women becomes a problem toward the end, when they band together in protest. It is their only and final showcase of collective power and solidarity among them, but the moment wasn’t earned.

The race of the women is not explicit in the play script — so the choice to make Elyse, the revolutionary, a black woman, is important. There is a betrayal at the end between Bianca, pregnant, and Elyse, a mother, that does not hold the emotional weight of when black mothers lose their children to state violence. The emphasis of motherhood does not become a clear theme to me until that moment, and it strikes me that Elyse’s motherhood is textually and directorially more invisible than Bianca’s more obvious bump. In the real world — where black women are three times more likely to die in childbirth than white women and the effects of structural racism have been shown to drastically affect parental abilities and render black mothers invisible — I wish Elyse’s motherhood was more present in this production.

The play grapples with questions of self-preservation, and the extent people will go to prioritize their safety over their own personal code of ethics. It asks us to bear witness to the courage of political resistance and the importance of collective action. The design elements of this play helped in visually detailing the characters’ relationships with those questions. Unfortunately, the lack of chemistry among the women prevents a richer synthesis.