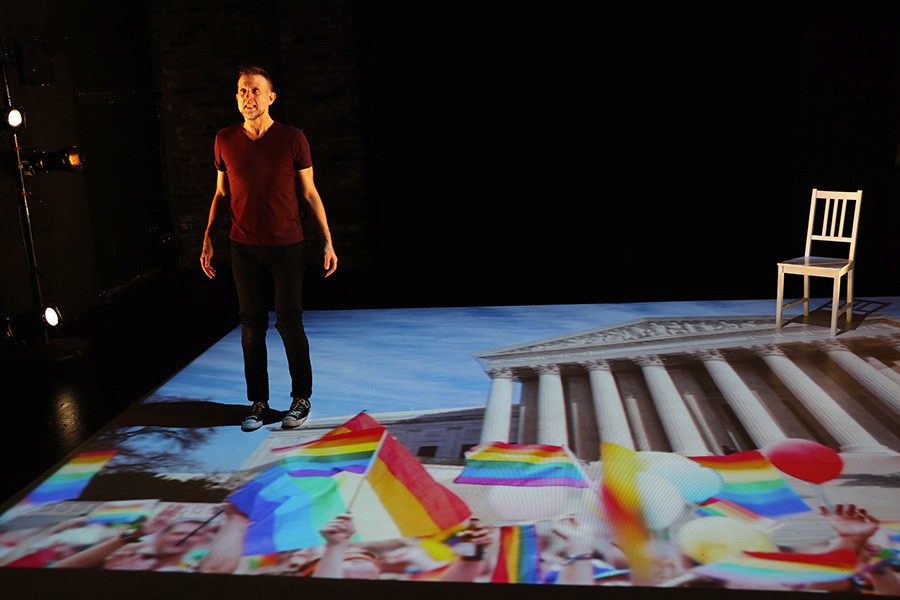 At first glance, the design team has rightly kept the focus on the actor; Scott speaks to us from a completely blank white stage, and his only prop is a plain white chair. He moves the chair around, sits on it, and stands on it, doing his best to keep the movement dynamic — but the stage pictures grow static after a while. A variety of physical activities in solo performance can often transform detached narration of the past and bring it screaming into the present in a visceral and tactile way; more of that would have been welcome here.

The tight, gut-wrenching, and elegant script is hampered by some extravagant design choices. When watching solo performance, fancy lights or sets do not make the performance; the actor does. The show’s use of projection is quite literal: when Scott spoke of his time living in a particular city, we saw a picture of that city. If he talked about a time he was in an amusement park, we saw an amusement park, with the accompanying environmental sound (Eric Backus). Much of the design placed the focus on communicating the factual details of time and place to the audience, rather than conveying an emotional truth. These design elements come together to make Packing feel a little over-produced; removing some of the more expensive features might have strengthened the narrative.

Luckily, the meat of the story is Scott’s narration, and this is incredibly strong. Any well-lived life is hard to wrangle into a story, especially a life still in progress, but what we see here feels cohesive, relevant, and enthralling. I hunger for more queer stories like this, that both examine in unrelenting detail the effects of bigotry and trauma, and propose concrete solutions for moving past them.