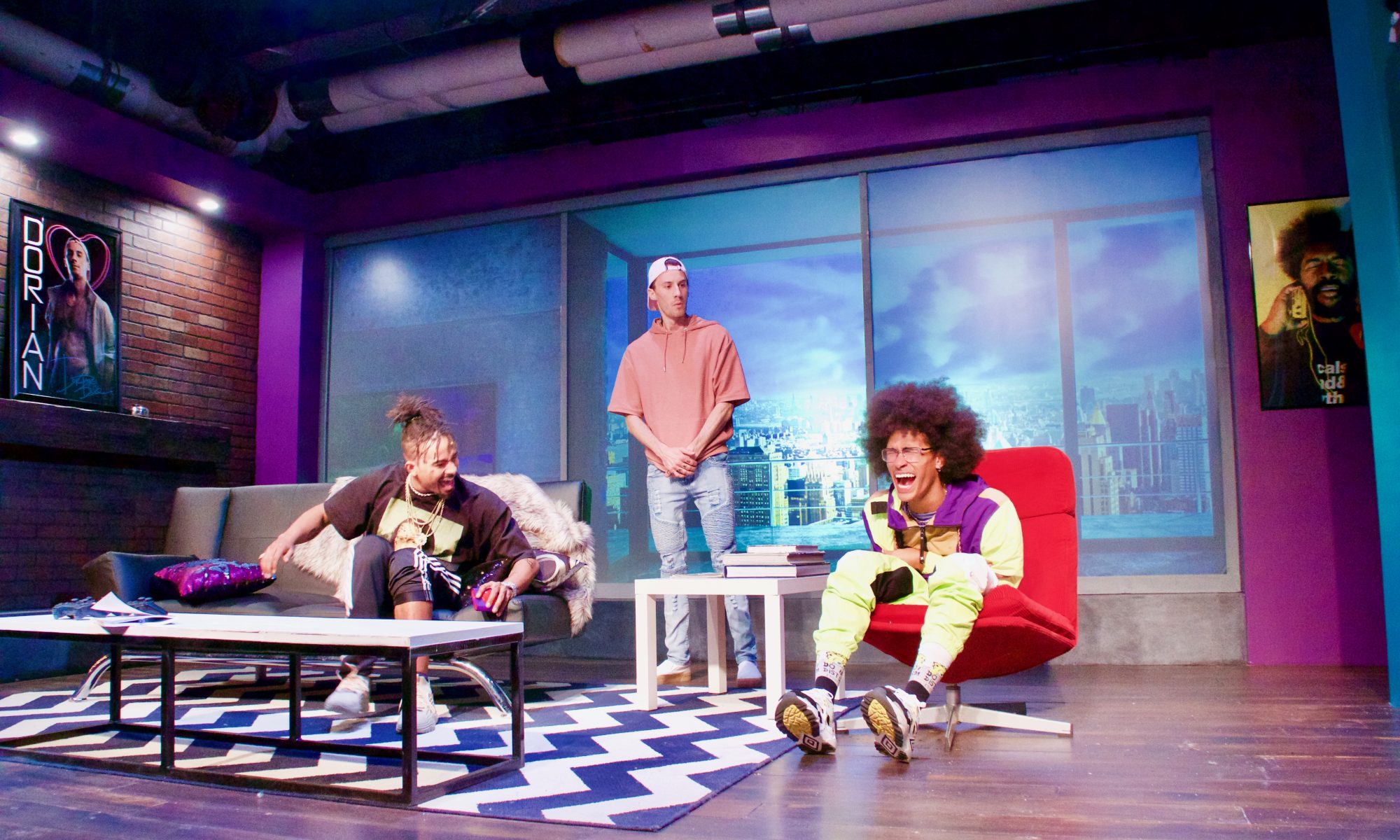 P.Y.G. or the Mis-Edumacation of Dorian Belle is a comedy all about race and pop culture. Jackalope’s latest show written by Tearrance Arvelle Chisolm and directed by Lili-Anne Brown follows three figures navigating a satirical version of the pop music industry. Dorian Belle (Garrett Young) is a white pop star looking to make his image a little “tougher”. Petty Young Goons (P.Y.G.) are an up and coming rap duo who have been hired to teach Dorian about hip hop, despite their own inner conflicts about it. The whole affair is wrapped up tightly as a reality tv show. The show is energetic and funny while also wading deep into questions about authenticity and appropriation.

As soon as I walked into the theatre I understood the world that had been crafted for us. Dj Khaled and Justin Bieber’s “I’m the One” played overhead. A projection behind the set proclaims that we’re watching P.Y.G., or the mis-Edumacation of Dorian Belle on ‘NTV’ with bold font and color blocking. Projections are also used during the show, to further immerse us into the tv setting with some hilarious satirical ‘commercial breaks’. Set designer Lauren Nichols’ bright colors and luxe but sparse furniture pull the reality tv house set up into even clearer focus. The set captured the glossy, almost-overstimulating feel of reality tv so well it took me right back to waiting for my siblings to finish watching MTV as a kid in the 2000’s.

I should say that waiting for the TV in the 2000’s is the closest I’ve gotten to actually watching this kind of conflict/relationship based form of reality tv. Going in I wondered if a lack of pop-cultural knowledge would keep me from connecting with the world of the play. But it feels like playwright, and director both know exactly how this notoriously dramatic form of tv fits in with contemporary theatricality. The performers take to this reality tv landscape readily and the actors playing P.Y.G. really shine.

Eric Gerard plays Blacky Blackerson, the more extroverted half of P.Y.G., and initially the more suspicious of the two when it comes to Dorian Belle. Tevion Devon Lanier plays Alexand Da Great (say it out loud), the more hesitant one, but he’s also more excited about the career opportunity the show presents. The pair have great chemistry, which is so important for this portrayal of childhood friends and artistic collaborators. They bring an energy to their roles that tells the audience from square one that the show belongs to them. Black and Alexand go on different journeys and find themselves in extreme and opposing positions, chased by the same fear of how their Blackness will be perceived. Gerard and Lanier keep up with these emotional journeys aptly, foiling one another the whole time, while also staying in step with the show’s demanding comedic tone.

The journey that Black and Alexand go through was deeply compelling to me as a Black artist myself. When people with marginalized identities find themselves in the spotlight, especially when they are artists, they often learn just how quickly other people’s expectations can define how the artists’ work and actions. Black and Alexand start the play thinking that they understand the racial politics of the situation they’ve walked into, however perilous, and how to best navigate them. Then, as the omnipresence of the cameras and opinions of viewers set in, they find themselves driven to react in new, more severe, ways.

My favorite thing about P.Y.G.‘s script was the clear commitment to thoroughly explore the role race plays in how art and media are created and received. Half-hearted plays which evoke or allude to hot social topics only to leave them in the background, unengaged, are a dime a dozen. But there is so much to excavate in Chisolm’s text, about contemporary Blackness, about the appropriation of hip hop, and about how to evaluate authenticity, and more. Brown as the director skillfully gave all of those themes their own space to breathe. The performers give equal weight to comedic moments and show-stopping moments of truth. Go see P.Y.G. or the Mis-Edumacation of Dorian Belle for the laughs, for the spectacle of it all, and to engage with the important ideas it contains. I bet you’ll come away excited by all three.

P.Y.G. or the Mis-Edumacation of Dorian Belle runs through December 21st at Jackalope Theatre.