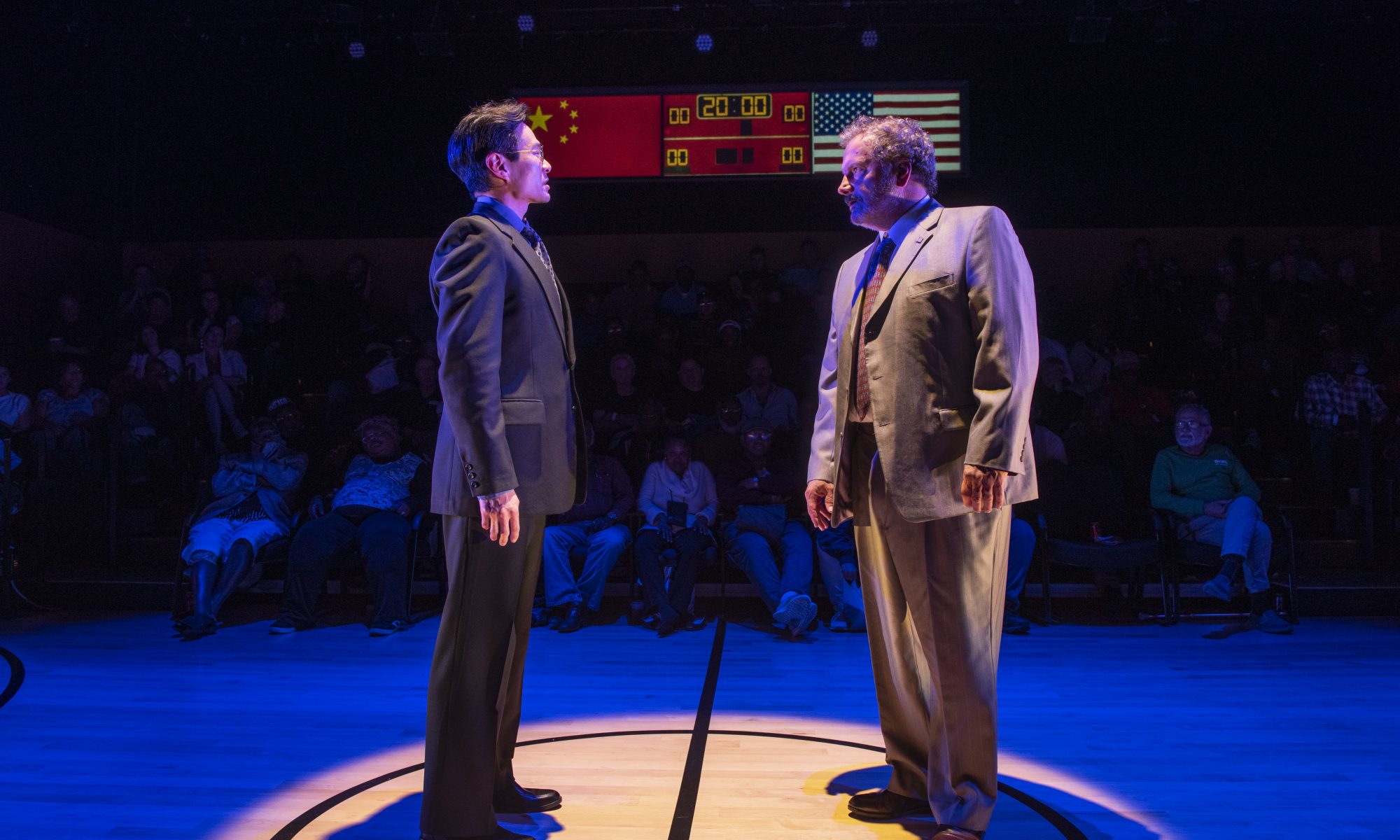 Many Americans sitting in the audience for The Great Leap may have a basic knowledge of what happened at Tiananmen Square. Some of them watched the coverage on their televisions. Younger generations have read about the events in their textbooks. Some caught stories about that historic event during its 30th anniversary earlier this year. Almost all Americans have some working understanding, all with the privilege of distance. Lauren Yee closes that distance with her play The Great Leap, where an American college basketball team travels to Beijing for a “friendship” game when relations between the two nations are anything but friendly. The game is scheduled for June 3, 1989, one day before the Tiananmen Square protests come to a violent end. Director Jesca Prudencio taps into the inherent tension of time and place with the kind of dramatic spectacle typically reserved for the stadium. At its heart, The Great Leap is a play about collision: sports and theatre, US and China, protesters and government. The court in Steppenwolf’s Upstairs Theatre is the battlefield and the end of this collision course.

Jesca Prudencio leads a sharp ensemble of four with the weight of the world on their shoulders. Glenn Obrero (Manford Lum) is the ultimate underdog. As the audience’s first introduction into the play, Obrero is immediately loveable. The Chinatown local legend reads from notes scribbled on his wrinkled, white dress shirt as he fights for the chance to play in the upcoming “friendship” game against Beijing. Deana Myers (Connie) watches from the sidelines, appearing as a guide and support system for her cousin, Manford. Armed with her own basketball expertise, Myers is a joyful and informative addition to any scene. When she steps on the court, the world grows larger.

The two rival coaches and longtime frenemies have a unique and compelling relationship not typically seen in the sports entertainment genre. These two men have a past, but cultural barriers keep one from ever fully understanding the other. Keith Kupferer (Saul) is the hilarious and heartfelt American coach. His east coast grit, jaded world view, and 80s style racism make for an entertaining and familiar character. Kupferer is easy to laugh at and equally easy to root for. James Seole (Wen Chang) is the knock-out performance of the evening as the Chinese coach. Seole holds within his character the greatest complexities rooted in a cultural upbringing that I just don’t have a context for. He is the one person on stage with the highest stakes and it’s hard to look away from his gripping performance.

Justin Humphres (scenic design) transforms the Upstairs Theatre into a basketball court, and the result is disorienting. As soon as I walk through the door, memories of high school gym class start flooding back. You can almost smell the sweaty socks. Jenny Mannis (costume design) completes the picture with a traumatic array of ultra-short gym shorts, sweatbands, and squeaky sneakers. Keith Parham (lighting design) and Rasean Davonte Johnson (Projection Design) take the set from gym class to Championship game with spellbinding precision. Bold colors cut through the space to carve out a path and isolate dynamic moments in time. It is the Sound Design by Nok Kanchanabanca which guides the audience turned spectators from one moment to the next in this fast-paced race with the clock. The Great Leap design team nails the basketball aesthetic from the scoreboard to the buzzer, and the familiar setting is a much-needed touchstone as the world of the play grows larger than the outcome of a single game.

I love college basketball. I used to go to George Mason games with my Dad when I was growing up in Northern Virginia. We never went to professional games, though. The college games were just better because the players had something to prove. That same passion drives each of these players on the stage as they fight to prove something to the world and themselves. The world, however, is so much bigger than a single game. Just as this ultimate scrimmage was set against a backdrop of protest, the Steppenwolf production is engaging with a kindred moment. It is clear that protests and civil unrest are not resigned to the past as tensions continue to rise throughout Hong Kong. Young men and women fighting from barricades throughout the city. The Great Leap is an energetic, bold, and weighty look at what it means to fight when you have nothing to lose. The fight goes on.