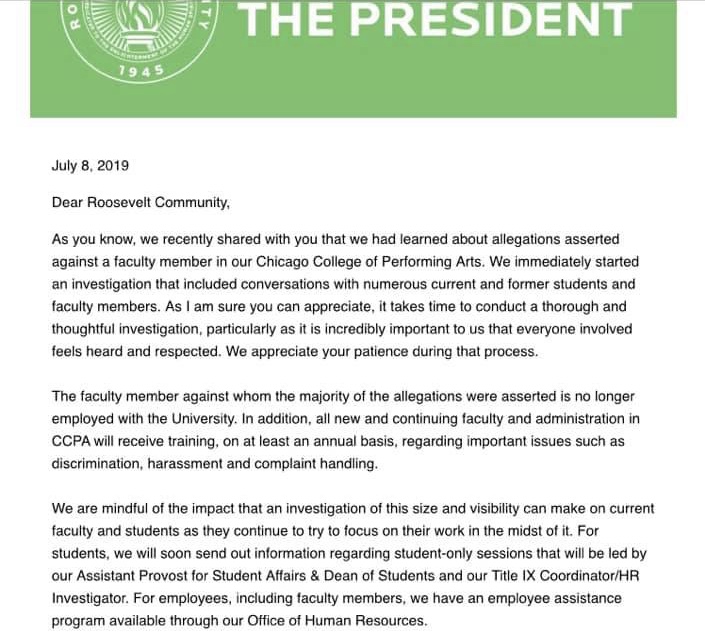 “Can we not force students to be around reported abusers? Students and otherwise.” – Anonymous Roosevelt University Student, June 17, 2019.

Just yesterday the news broke that Senn High School teacher and former co-Artistic Director of The Yard, Joel Ewing was charged with a count of sexual assault involving a minor.

Earlier this year The Chicago College of Performing Arts at Roosevelt University’s Associate Dean and Director of the Theatre Conservatory Sean Kelley was accused of repeatedly humiliating and sexually harassing his students. This was never reported, but as you can see from the cover photo of this article, students and faculty were quietly notified via e-mail that he was no longer employed at the university after months of outcry on social media.

These events, and the culture of every theatre program in America, are closely intertwined, and it’s time we acknowledge that.

CCPA’s program specifically suffered from a longstanding history of racial discrimination and physical discrimination in the form of fat shaming students and pitting ingenues against each other, in addition to their Associate Dean’s sexual harassment. Alumni Tatyana Chante and Netta Walker took it upon themselves to host a forum for the students and alumni affected by the toxic culture of Sean Kelley’s theatre department, in the spirit of healing. As Chante put it, the students have been living with this for almost thirteen years.

“This school has, over the years, found a way to crush the spirit of it… that is not all faculty just a few people.”

The quotes that litter this article are from that forum. They brilliantly asked their peers to both participate in a guided conversation with intimacy choreographer Gaby Labotka, director Lavina Jadhwani, casting director Catherine Miller, and former CCPA professor Candace Taylor , and also to reflect in writing as the conversation took place. Netta Walker read these aloud during the breaks.

“Technique is not trauma.”

Theatre teachers have an unprecedented amount of access to and influence over their students. I never recall hugging my English teachers, but I hugged my theatre teachers. I never drank with my math teachers. I went out for drinks with theatre teachers after conservatory, usually rounds they bought for us. If boundaries are not properly set, teachers in theatre or performing arts have an unbelievable amount of access to a young person’s mind set, self image, and sometimes their physical person. It is not an uncommon undergraduate acting experience of my peers to have been told they are unworthy of a career, that they are fat, that they are untalented, by the people paid to instruct them.

“I need a space free of anger or fear.”

It was a bloody excavation of every dirty secret every student and alumni in that room had been forced to keep for almost a decade, and it was ugly. Tear filled allegations surfaced one after another like they were bubbling out of the guts of hell, and yet they were talking about a school that some of them still attend. Candace Taylor, a former professor, talked about being given the “Leftovers” (the other teachers’ phrase, not hers) after the white teachers had finished casting their favorites. Taylor’s productions were given the least amount of resources and she was never permitted to work on a mainstage piece.

Students went on to attest that most of the people who dropped out of their school were people of color. One even added “white men are the people favored” because that is the demographic of their faculty. Young gay white men were told to “straighten things out” and asked to be more straight-passing (whatever that means) for roles. The former professor recalled students being called “light in their loafers” amongst the faculty, an old euphemism that suggests someone might be gay.

“Stop making fun of or pointing out our hickeys.”

At Roosevelt you must sign a contract dictating you will perform whatever role faculty casts you as, an obligation working professionals don’t even have. They would recount going into auditions, terrified they’d be asked to do something they didn’t want to do. A particularly ferocious anecdote from a class that was voiced at the discussion involved a young woman being essentially waterboarded.

What you need to know about this event is that this is merely the surface of the allegations of the school. The situation is littered with horrifying details.
The change.org petition that calls for his firing clearly shows a photo of a nude, underage boy Sean Kelley liked on instagram. Within five minutes of asking a student questions they informed me of this, showed me the photo, and then began to describe the type of young boy Sean Kelley is interested in without missing a beat. Every adult in that room was white-knuckling the arms of their chairs during that 90 minutes and I know why.

“I wish I hadn’t been taught I needed their approval or validation.”

We were gripping our chairs because we cannot keep them safe. I know that because I was not saved. A theatremaker I met as a teenager caressed my shoulder, asked me when my 18th birthday was, and then wrote it down in a notebook. I didn’t realize how strange that was for years. There have been times I was academically bullied into playing a role I did not want to do because it was the ‘black’ part, there have been times teachers have told me I was not worthy (of what?) and left me crying in public hallways. Time, space, and age have allowed me to forget these things, but the experiences of the students at Senn, and the students at Roosevelt, have now brought them to the forefront of my mind.

There is no theatre program in the United States that is not possible of generating these judgemental, unhealthy conditions for their students. There is little to no supervision of professors and the way they actually interact with their students at the college level. Like the Roosevelt students I’ve filed complaints and seen them go to nowhere. I’ve also been a teacher for many years and most boundaries I have set with my students I have had to set myself, no one has told me to do that. In fact, in some theatre programs I’ve had to argue AGAINST giving my number to minors, or friending them on facebook.

Thankfully, the Roosevelt students and panelists offered their own solutions to this incredibly dense problem and I will leave them here, as a place to start.

*Student Survival. The reason our teachers traumatized us and made us ask the age old question – that was repeated at this forum – is this what the real world is going to be like? Let me tell you right now: it’s not. When you can create space you can hire intimacy coordinators, create harassment reporting paths, bring in diversity and empathy and harassment trainings. When you create your own space, you can create whatever culture you want. Never forget if you are in a toxic culture, especially a toxic academic culture, it was created with the specific intention to benefit somebody that is not you. So if I can say one word to my own students – do not depend on your teachers. Carry on the work of these students, and create your own healing.

Author’s Note:  Thank you to the students from Roosevelt who so generously donated their time and energy to trying to fix a problem they did not create. Support and love to everyone involved at CCPA, Senn High School, The Yard, and throughout the greater artistic community who have been affected by these events.