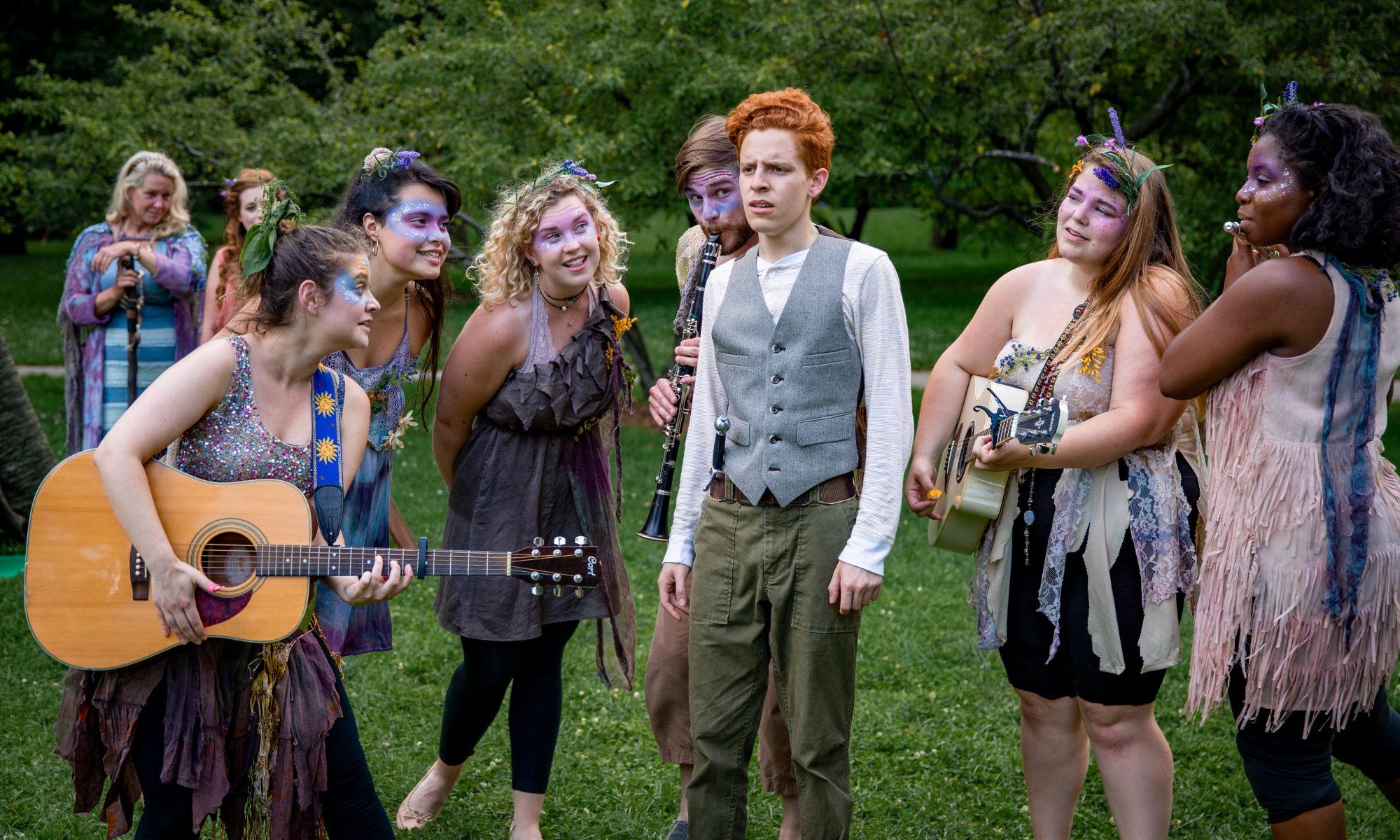 Midsommer Flight features the best combination of elements one can find in the theatre: Free, and Quality. William Shakespeare’s The Tempest marks the company’s eighth summer of free Shakespeare performances as an Arts Partner in Chicago. Many productions of this revenge tale/ comedy can get bogged down in all the alternative readings and academia. Under the clever direction of Beth Wolf, however, Midsommer Flight revels in theatricality and proves that The Tempest has a role in our daily lives.

Costume designer Lily Walls offers a clear visual difference between characters native to the island and those washed up on the shore. This distinction is created by dressing the shipwrecked characters in tailored, dark clothing that stands out against the lush green of Lincoln Park (the first park in the production’s run). While rigid, these “outsiders” are not without fun. Each has some pop of color, some sparkly bit of jewelry that makes room for levity while defining individuality.

Conversely, the spirits of the island look as though they’ve crawled out of the trees, with fresh and earthy tones. Though they are not without their individuality either. Each spirit has a notable piece of fabric, varying in color to separate them from their peers. Where the foreigners are tight and tailored, the spirits are free-flowing. This tension between costumes intertwines with a fluid set and props design by Jeremiah Barr to form stunning images.

Midsommer Flight’s The Tempest puts a great emphasis on fully lived characters. The classic comedic trio in the play, Caliban (Richard J. Eisloeffel), Trinculo (Kat Moraros), and Stephano (Tom McGrath) showcase this throughout their various shenanigans. The Tempest is a play with many simultaneous plots which are managed by Prospero (Stephanie Monday) and collide at her will. Each of these plots is a world all its own, and those worlds are maintained by talented players and directed by the skilled hands of Beth Wolf.

The true magic lies with the spirits of the island. The ensemble of The Tempest performs this magic in front of your eyes with musical instruments. In seconds, they conjure a shipwreck, a feast, and a harpy. These acts of sorcery might terrorize the shipwrecked Italians in the story, but they are a delight to the audience. This team of spirits is led by Ariel (Elana Weiner-Kaplow), who leads the charge at Prospero’s bidding with the goal of their personal freedom in mind. When that freedom is granted, a gust of wind blew through the park adding an unplanned drama that was all the more miraculous.

This production is in a park in the middle of a bustling city that does not stop bustling because a theatre company decided to congregate. Passersby stop for a moment to catch a glimpse. One young girl charged forward toward the action, forcing her bewildered parent to chase through the audience. Wind, adjacent activities, and traffic only add to the chaos. For these various reasons, the actors are difficult to hear. Although, let’s be honest, even in a quiet theatre plenty of Shakespeare just flies right over our heads. Before you go enjoy an evening in the park with Shakespeare, I would read the play or find a synopsis. A quick Wikipedia summary will give you all you need to know so that you can sit back and enjoy striking stage pictures and an energized ensemble. You don’t have to catch every word to understand the heart and intention of this Tempest.