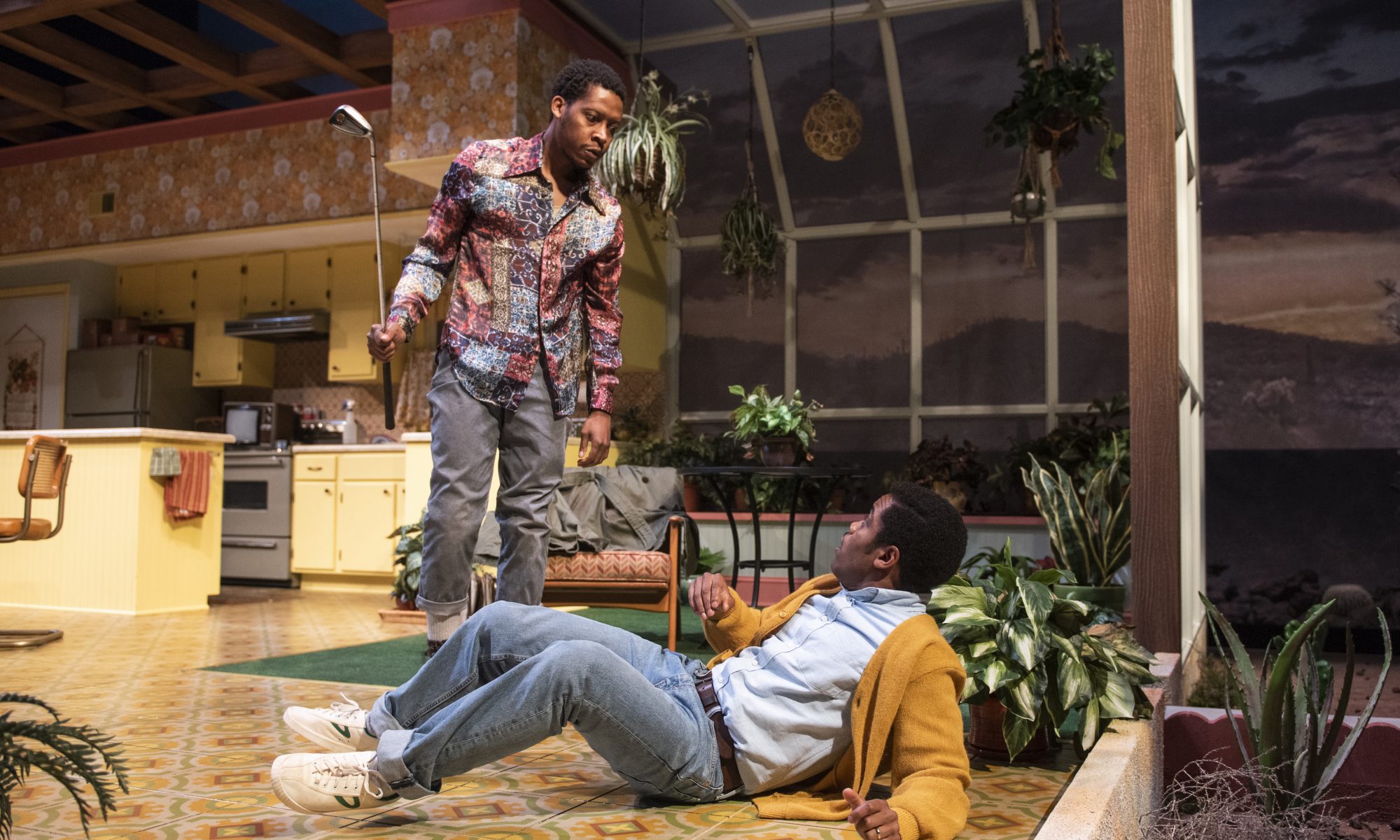 Sibling rivalry and resentment is the golden thread that runs through Sam Shepard’s classic play, True West. What begins as a standard tale of bickering between the Golden Child and the Black Sheep quickly takes a hard left turn when we realize that this Black Sheep may be mentally disturbed and harboring violent tendencies. Namir Smallwood plays an arrestingly intense Lee, toggling with ease between a playful and jovial energy and a cold, detached dominance without a moment’s notice. His presence as an aloof angry drunk drives this play, bringing a kinetic element of fear and excitement to an otherwise pedestrian moment. Breaking away from the tenor of Malkovich’s intense performance in the 1984 film, Smallwood’s portrayal of the grifter is still creepy but also somewhat charming and endearing, which helps contextualize why his brother simply wouldn’t call the police on sight.

Jon Michael Hill plays the responsible brother Austin, a writer and family man who is entrusted with watching his mother’s house and plants. The Steppenwolf downstairs stage has been transformed into a modest suburban house, placid save for the crickets and its inhabitants (set Todd Rosenthal). Hill brings considerable depth to this layered character, his awkward exterior concealing inner turmoil. Watching him navigate his brother’s unpredictable emotions is like watching a rabbit navigate a wolf’s den. The fear of loving a dangerous and unstable individual is palpable and heartbreaking. One of the most interesting facets of this work is its examination of mental illness and how it manifests in various family members. Symptoms that are obvious in one brother, may also be potentially present in another. Life choices or circumstances determine if and when that illness will completely overtakes one sibling, and allow another to live a more or less “normal” life.

When Shepard reveals that the brothers may share equal talent and potential, it becomes an incisive commentary on refined vs unrefined talent, access, classism, privilege and opportunity. Who has a right to success, earned or unearned? Is talent truly enough or must dues be paid? There is a feral delineation of territory that stands between the brothers, and the breaking down of those boundaries stands between their ability to truly connect. Director Randall Arney does an amazing job plotting this deconstruction through movement, physicality, and set; magnifying the journey of their emotions tenfold through the details of the aesthetic.

When cast with two Black actors, the script takes on the additional weight of our societal expectations of young Black men. They refer to a fraught upbringing, yet Austin is the child who has overcome; bootstrapped himself to the trappings of a middle-class life of respectability, no matter how fragile that illusion might be. The bickering about which sibling was truly there to care for a belligerent, drunk and destructive alcoholic father will brutally rip open wounds for anyone who fled home to survive; and for those who stayed and survived in spite of it all. Lee has become a homeless drifter and thief – and a reflection of the lack of compassion society has for those who have fallen by the wayside. The moment when Lee seizes a handhold of life inside the margins, and is accepted and embraced by Saul the producer (Fran Guinan reprises this role from the 1982 Steppenwolf production), is the moment where Shepard brilliantly morphs a realistic depiction into the high drama of cinematic fiction. After all, in real life, those boundaries cannot be crossed that easily. And certainly not for a Black man.

As Lee rages, we see a bitter man, lashing out, recoiling from, and angry at a world he can never have. The corny 1980’s fetishization of blonde women that are mentioned in the script placed in the mouths of Black actors, becomes not only status symbols of male entitlement, but also hallmarks of a social strata that the brothers desire yet will likely never achieve, and in their hearts perhaps do not truly want. For as soon as success is within their grasp, they begin to destroy each other through petty sibling fights that ironically bring them closer. Austin’s seemingly irrational choices in the second half make complete sense in the face of the hollowness of the life he has chosen.

Francis Guinan plays Saul Kimmer, the shiny and slick-talking producer who serves as a flashpoint between the brothers. Guinan plays Saul with an earnestness that makes you believe that he is real, even though his presence is the moment where the lines between reality and fiction begin to blur. As the debate as to what makes a story “authentic” begins to boil, the play becomes more avant-garde and cinematic in style. The desires of the brothers flip, the most hilariously stupid crime on the face of the earth is committed, and we as the audience begin to lose our bearings. By the time Jacqueline Williams appears on the stage as the aloof, yet curiously affected Mom, the story has become more abstract and unlikely than the encounter with Picasso she desires.

The enduring quality of True West is its examination of our perception of reality and authenticity. What are its hallmarks? Can we truly evaluate authenticity, or is it simply a feeling deep within our gut? And what are we willing to sacrifice for a chance to escape our circumstances driven by that vague undefinable hope that lives somewhere in the pit of our stomach? And if we leave on that journey, will we ever get to our destination? One can only hope that all of our compasses point true. And Steppenwolf’s revival of this powerful and enduring masterpiece certainly points True West.