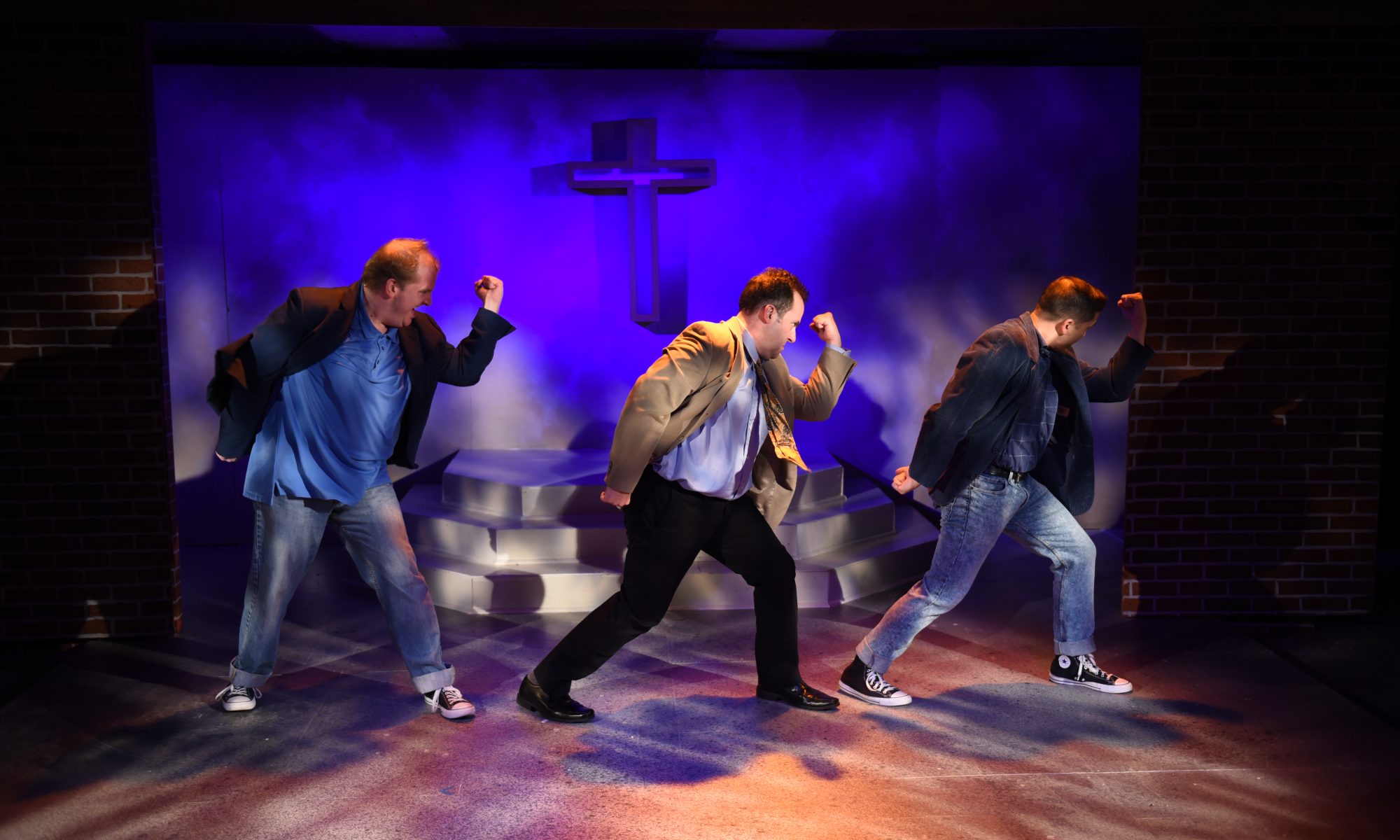 The Factory Theater is just that, a factory that churns out new plays. The most recent addition to their catalog is the play Prophet$ by company member Anthony Tournis. Set in 1988, Prophet$ is the story of three down on their luck conmen who score big as televangelists. Wm. Bullion directs the world premiere and the play dives headfirst into the era. Everything in this play screams “80s”, from the shoulder pads to the jokes. The self-proclaimed “Stripes-esque” production borrows so much from 1980s comedy that this new production already feels dated.

Where this reference to the past really shines is with the production’s overall design. The visual world of this play is beautifully imagined by a detailed design team with a sense of humor. Costumes by Isaiah Williams are a realistic depiction of Texas in 1988; big hair and even bigger crosses. Scenic Designer Eric Luchen is equally on the nose with a church that looks as if it were purchased from a strip mall. Lighting Designer Jordan Kardasz brings everything to life with a vibrant color scheme that really helps the glowing cross on the back-wall pop.

Prophet$ is truly blessed with a deeply invested ensemble. Ensemble members billed as the “Cameo Crew” (Abigail Warhus, Conor Clark, LaRose Washington, and Will Snyder) jump into various roles throughout the evening. Whether a shameless jogger or a stoic bodyguard, these performers bring their all to whatever world-building role they take on. The Cameo Crew has their chance to shine during an 80s montage dance sequence. This breakout dance moment is the most successfully executed reference to the decade with its over the top dance moves and cheesy song choice.

While the ensemble and the design skillfully bring the past into the present, the old-school styles of comedy at the core of this play fall short. The protagonists for Prophet$ are three con men who fit the structure of a classic comedy trio. Vic Jacobowski (Anthony Tournis) is the “mastermind,” Seth Levy (Eric Wang) is the voice of reason, and Owen (Eric Roach) is the loose cannon. See The Three Stooges for a famous example of this style at work. This type of comedy team can lend itself to various moments of verbal and physical comedy if the group functions expertly. The three stooges in Prophet$ have difficulty selling such moments as a team, one of the three usually overshadows the others.

If you revisit a comedy from the minds of National Lampoon, chances are the jokes did not age well. Often the punchlines derive from sexism, racism, or homophobia. These comedies featured white men in power taking advantage of everyone they could, even if they were positioned like an underdog. How do you then recreate that style when we know better? Prophet$ tries this when it is revealed that a rival televangelist has engaged in “homosexual activity.” It’s hard to know who the joke is on in this moment. Is gayness the joke? Is the joke gayness in the 80s or rather the hypocrisy with this religious figure? The answer is unclear, and the jokes don’t stick the landing.

For a theatre that prides itself on originality, this production was a disappointing parade of old tropes. The style is dated, and we’ve seen this plot before. Leap of Faith starring Steve Martin premiered in 1992, with the same subject matter and nearly the same date as Prophet$. Very soon HBO will premiere its new show The Righteous Gemstones which follows a group of three men who make some serious cash in the religion game. Prophet$ presents a narrative we already know without anything new to say. I look forward to seeing what Factory Theater will bring in their next season that better fits their goal: Original. Bold. And Full-Tilt.

Prophet$ runs at The Factory Theater through July 20th.