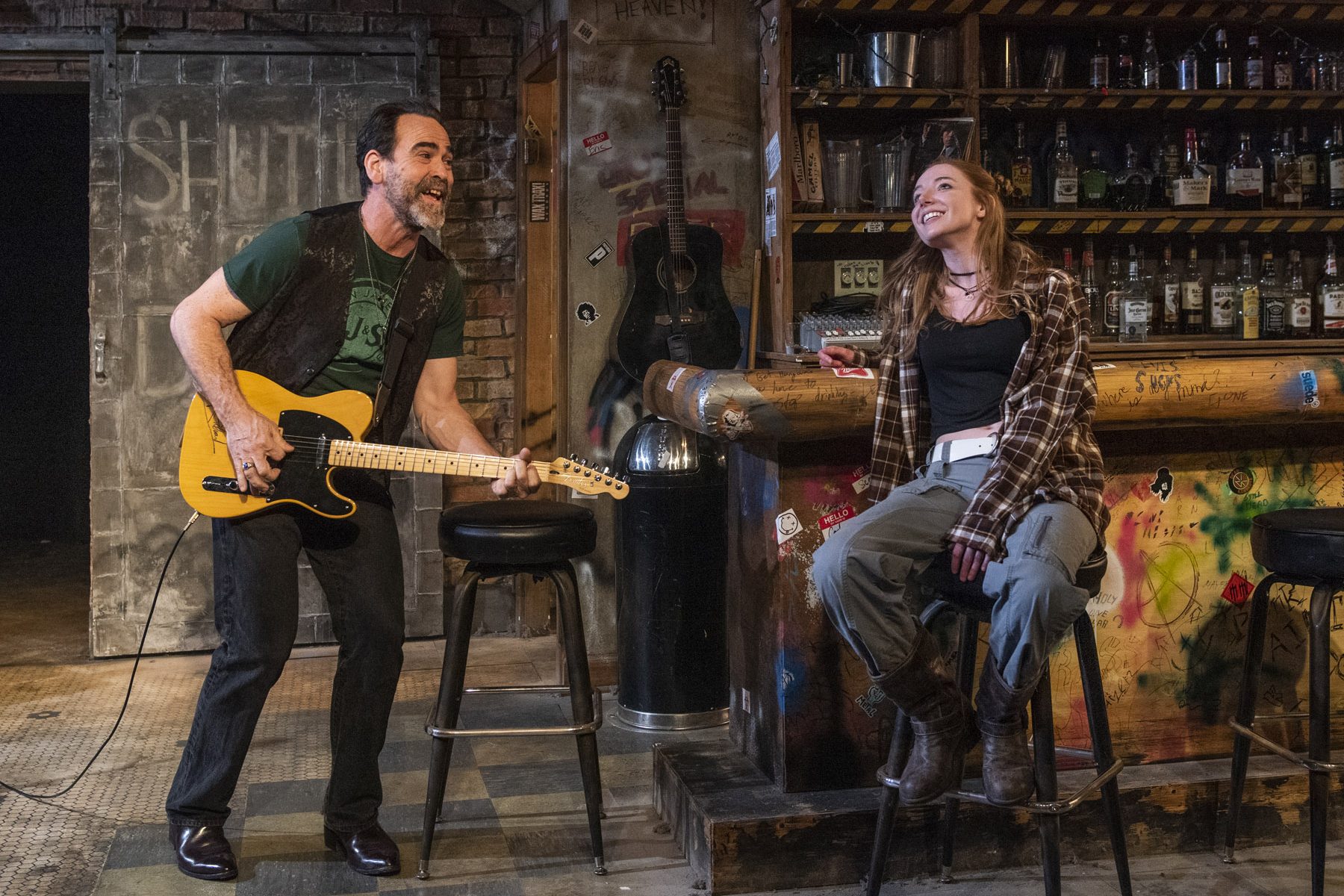 The Undeniable Sound of Right Now by Laura Eason is not about the present. “Now” in the play’s title refers to Chicago in 1992. Grunge is spreading across the country and House Music shakes nightclubs with its electric tune. Hank’s Bar was the place to be during the 70s wave of Rock n’ Roll, but in 1992 “Now” and “Then” clash within the walls of this cultural relic. BJ Jones directs the Chicago premiere at Raven Theatre and this project on paper promises something worthwhile. The final product, however, is unsatisfying.

Laura Eason has written a script about the past that just brushes against nostalgia without ever really hitting the nerve. References to 70s music history are nestled in a 90s setting and neither feel fully alive. The design is the exception. Set designer Jeffrey D. Kmiec and scenic artist Eileen Rozycki join forces to create a 70s dive bar that has been ravaged by two decades worth of musicians. The graffiti art that stains the stage is detailed and dingy. I imagine what I might order had I walked into Hank’s myself. Prop designer Lacie Hexom clutters the back of the bar with plenty of whiskey options, so I’d probably get a bourbon something or other.

Detailed design and unfocused direction struggle to find harmony on stage. The orientation of the bar itself is angled in a dynamic way and the staging suffers. Too often, actors upstage themselves and the angle of the set doesn’t seem worth it. Issues with staging do not fall solely on the configuration. BJ Jones positions the actors at a great distance from each other. The result is a lot of yelling and unmotivated movements. It’s rigid. The most compelling moments are those fleeting seconds of intimacy occasionally shared between two characters.

One such moment is when Hank (Jeff Mills) and his daughter Lena (Lindsay Stock) share a coffee after a long night. In one of the rare moments when these two aren’t debating the future of the bar, we get a beautiful view into a loving father-daughter relationship. Dana Black also brings care to the stage as Bette, Hank’s Ex-wife and emotional rock. Both Jeff Mills and Dana Black break through the yelling to deliver multi-dimensional performances. When these two are onstage together, it’s like a whole different play. There is an honesty they convey that is missing when both are absent.

The Undeniable Sound of Right Now is a script without a narrative purpose. It focuses on an idea, a moment in time so specific to the playwright. The overall conflict that drives the text fails to dig deeper than the surface issue of changing tides. Some scenes glimpse into further complexity but these narrative strands never string together. References to drug use or unrequited love are mentioned one second and forgotten the next. Perhaps this is responsible for the little change seen onstage over the course of the play. The characters don’t experience much of an arch, so the inevitable loss of the bar at the end is an attempt toward bittersweet that doesn’t stick the landing. Raven Theatre’s final play of their 2018/ 19 season just misses the mark.

The Undeniable Sound of Right Now runs at Raven Theatre through June 16th.