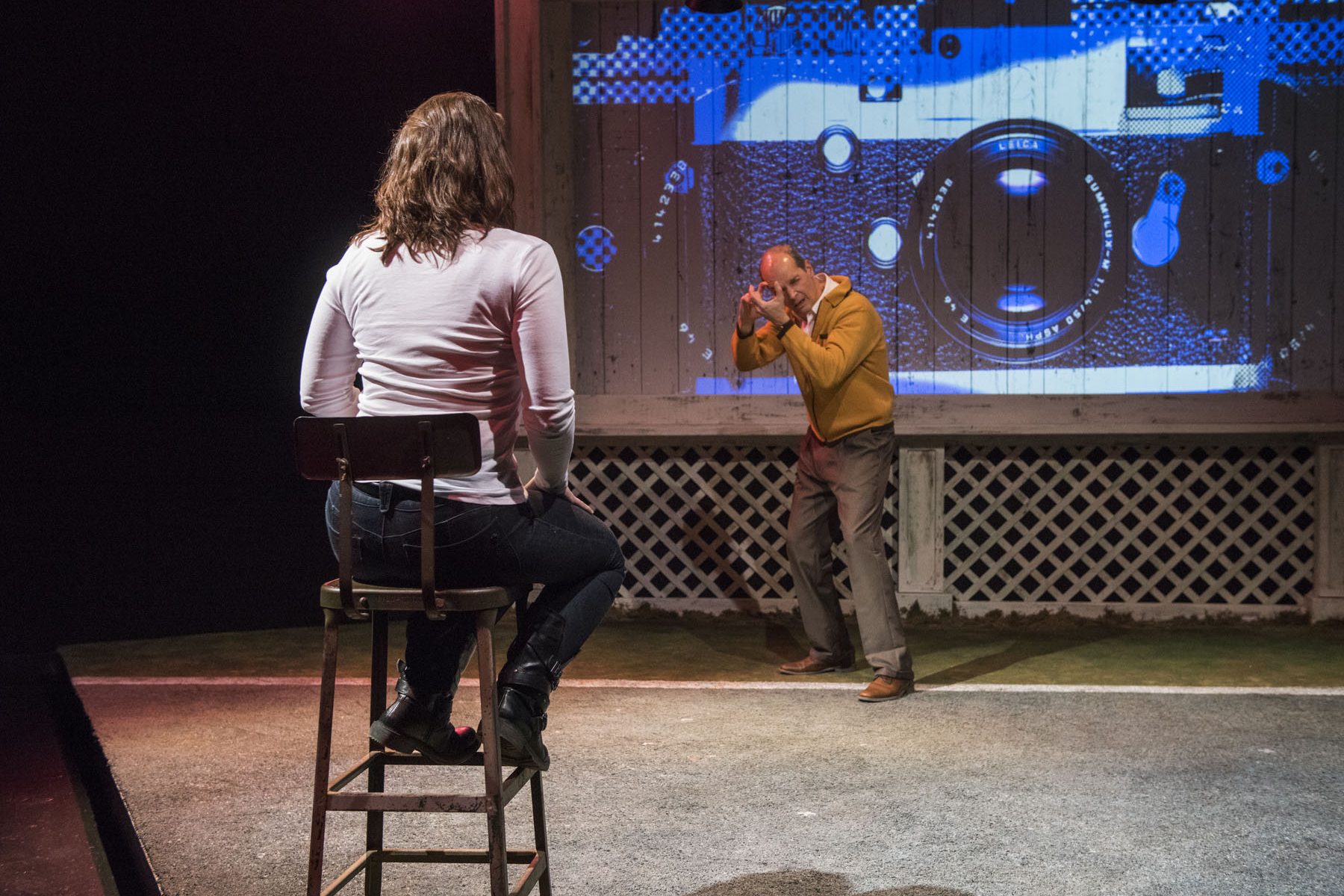 How I Learned to Drive by Paula Vogel is a series of recollections and rememberings from the perspective of a grown woman who was sexually abused by her uncle throughout her childhood. Presented by Raven Theatre Company, the character known as “L’il Bit” – a name she hates to be called – narrates her journey along with a chorus of three people. Together they chronicle L’il Bit coming to terms with her trauma and her complex feelings about her uncle and family. Throughout the performance, the narrator grapples with forgiveness, desire, fear, dependence, trust and love. There is never a question that her uncle is a pedophile with a pattern of abusive behavior who groomed and manipulated her (and perhaps her cousin) for his own erotic and emotional satisfaction.

Vogel invites the audience into nuance as L’il Bit examines her memories, her lingering emotions and dependency, and the realization that she has passed on the violence that she survived. While there is no equivalency between what the narrator’s uncle did to her, and her sexual relationship with an older, but still underage, young man, she faces the realization that there is a part of her that understands what her uncle might have been seeking while pursuing her. Vogel does not shy away from the cyclical nature of sexual violence, nor from the crushing reality that the human mind sometimes has a horrifying capacity for understanding.

The narrator examines this capacity for understanding while inhabiting memories of her family. In these moments Vogel asks questions about how gender affects the knowledge about sex and sexuality that young women have access to, and reminds the audience of how sexual violence and gender expectations are intimately connected. At the same time, Vogel also asks questions about the act of remembering; at times the narrator is unreliable, and it is clear that at the very least there are things she chooses not to remember. Above all this play is about nuance, a terrifying, overwhelming and critical nuance that starts Vogel’s narrator on her journey of healing.

Estle’s production makes full use of Vogel’s beautifully layered metaphor, with set design by Jeffrey D. Kmiec, lighting by Becca Jeffords, and projection design by Tony Churchill. The projection design is at times subtle and oblique, and at other times direct and acute, all the while providing a powerful visual harmony to the main character’s voice. Churchill and Estle create a clever way for the audience to access the interior experience of a young woman under intense emotional and psychological pressure. In a show such as this, it’s comforting to know that the moments of physical and sexual violence on stage are done with the consultation and skills of an intimacy director, in this case Rachel Flesher. The physical relationships between these characters, especially between Uncle Peck and the narrator, are difficult to watch. Though I won’t hazard a pronouncement on the place of simulated sexual violence on stage, it is a relief to know that this production invested time and money into hiring a professional to navigate, choreograph, and be an advocate during this process.

Costume design by Theresa Ham, props and dressing by Abigail Cain, and dialect coaching by Kathy Logelin add a layer of distinctive authenticity to this production, and aid in weaving a unique feeling of unreal reality that sometimes accompanies the recollection of details so vibrant and specific as to be somehow too real or larger than life. Embodying this demanding piece is no easy feat, and actors Eliza Stoughton and Mark Ulrich make a deeply unnerving and talented pair, with Stoughton proving a courageous and complex narrator and Ulrich an unsettling and multi-faceted Uncle Peck. No less talented are the three chorus members, Julian Hester, Kathryn Acosta, and Katherine Bourne Taylor, whose athleticism and flexibility as actors populated the memories of the main character.

In the more than twenty years since Paula Vogel’s How I Learned to Drive was first performed, much about the conversation concerning sexual violence and trauma has shifted. In 2019, Vogel’s play has a special resonance in the wake of the #MeToo movement, the confirmation of Supreme Court Justice Brett Kavanaugh, the explosion of public discourse around the rampant abuse of power in the entertainment industry, and the passing of legislation like FOSTA-SESTA. This play is a reminder that survival is a lifelong struggle, and that our social and legal institutions oftentimes do not protect or prioritize survivors of sexual violence. Vogel’s main character calls the audience at Raven Theatre to witness a remembering, to pass through her trauma in search of the sunrise after a long dark night.

How I Learned to Drive runs at Raven Theatre Company through March 24.