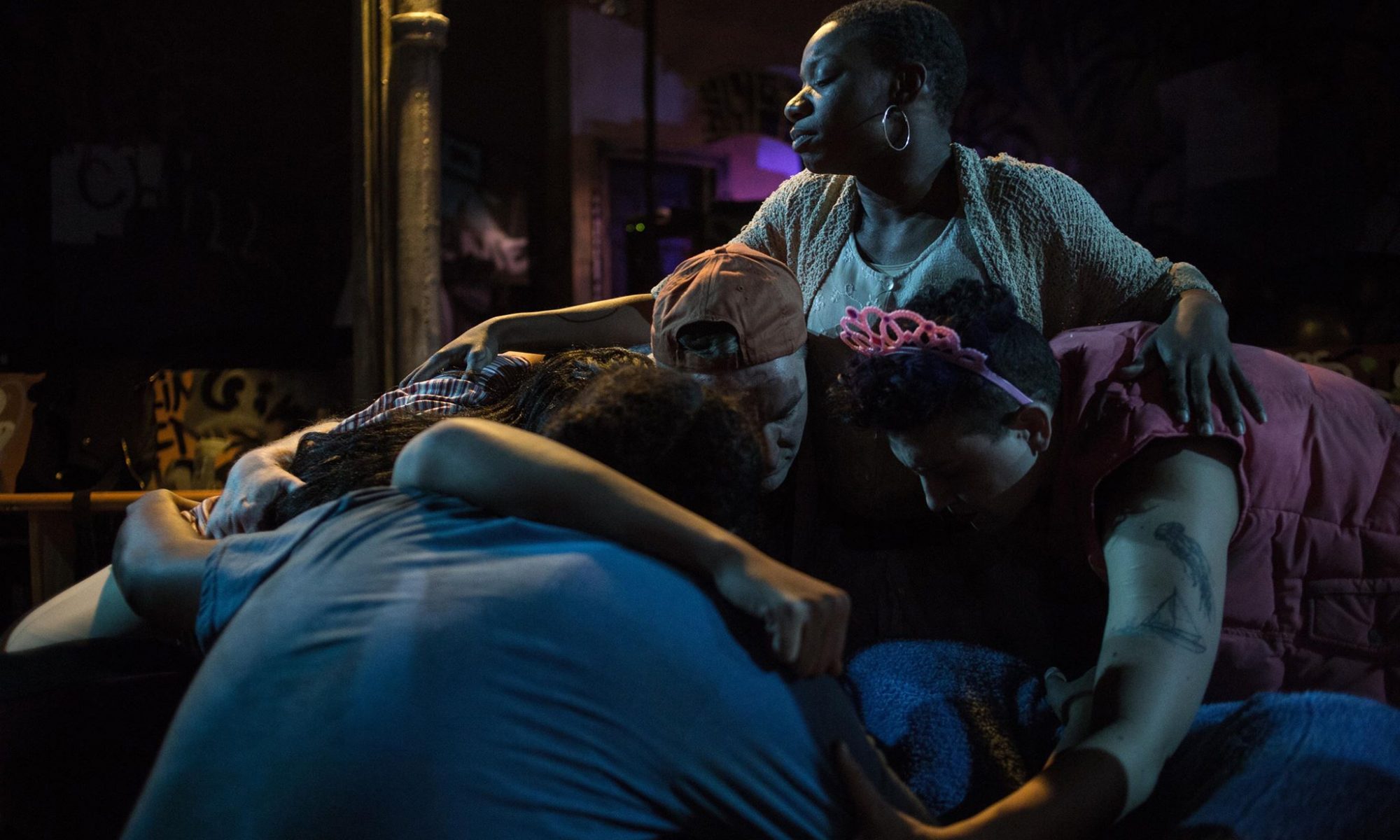 Red Tape Theatre performs In the Blood by Suzan-Lori Parks at The Ready in Ravenswood. The theatre is a narrow strip covered in graffiti. It’s fresh, and I can tell because the scent of paint is unmistakable. Among this jumble of tags, the word “SLUT” screams in a bright pink that adds to the cruelty of the word. Hester (Jyreika Guest) is a downtrodden mother of five who has made the space under an overpass her home, a home now defaced with this vile word she has no way of reading. It is under this bridge where Hester cares for her children and is cared for by no one.

Suzan-Lori Parks doesn’t pull any punches in her text and Chika Ike’s direction is masterful. Her use of space coupled with her ability to isolate moments of massive importance allows a tight space to feel vast. Every scene between two actors is electric, and Chika Ike leads that charge. Hester is forced to seek help from those who have used and abused her, and these confrontations are curated with surgical precision to reveal the darkest layers of society. Those same actors then reappear as the ensemble of five children. The doubling of these roles darkens any loving moment that these “five treasures” share with their mother.  Gaby Labotka’s artful fight and intimacy direction guide these interactions to fruition with brutal intensity and seamless execution.

Kiayla Ryann and Casey Chapman, both Red Tape company members, are a devilish duo. As Bully and Trouble, they stir energy into those ensemble piles. As Welfare and Doctor, they team up against Hester as social abusers protected by authority. Emilie Modaff laughs tragedy off with bravado as Amiga Gringa, and Max Thomas is magnetic as both Chili and Jabber. Richard Costes gives a traumatizing performance as the Reverend, bringing a new meaning to the term “poverty porn.” This term refers to when charitable organizations sensationalize poverty to elicit an emotional response. For the Reverend, this imagery brings personal and physical pleasure. Each of these ensemble members is caught in the gravitational pull of Jyreika Guest and her monumental presence. Although she is the victim of this story, Guest can suck the air straight from your lungs with a single look and often does. The organization of this powerful cast around Jyreika Guest is a cosmic creation that begs the planets to align.

Nicholas James Schwartz’s striking set integrates seemingly scavenged materials while graffiti artists Matthew Christopher and Noe Jara hide the walls of the back room with a barrage of color. An immersive sound design by Steve Labedz transforms the space further. The constant blending of automobiles mutes the outside world and makes this narrow passage under the bridge the only world with any importance. Eric Watkins counters a vibrant set by emphasizing shadows in his lighting design. Darkness presides over this world, imbued with feminine hues. The occasional sterile white spotlight is soiled by the characters it illuminates.  Rachel Sypniewski’s costumes similarly put clean and dingy side by side in a way that visibly others those living on the outskirts of society. The overall design consumes the audience and break-away choices shock the system.

In the Blood is presented by Red Tape Theatre and tickets are free. Red Tape’s free theatre movement values access to art over ticket price, and that company value shows in this production. Red Tape has achieved premiere production quality, expert design elements, and a killer cast. Too often characters depicted in theatre could not afford a ticket to their own production. That is not the case with In the Blood. In fact, I don’t think anyone can afford to miss this performance.

In the Blood runs at Red Tape Theatre until February 23rd.