Get to know Elon Sloan, a recent Alumni of The Key Young Critics Mentorship Program! Each writer wrote a multimedia review about a piece of pop culture currently capturing their imagination that you can read at the end of Elon’s profile. We’d like to thank Angelica Jade Bastien at Vulture for sharing her insights on media reviewing with us. Check out more of Elon and their cohort’s writing in our Key Reviews section! 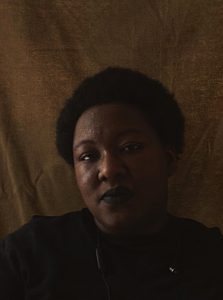 City/State: I grew up in Oak Park, Il, but now I live in Chicago

Why do you want to write for Rescripted?: I love that Rescripted gives artists a chance to create a dialogue about one another’s work. Taking conversations that might only happen between theatre professionals or artists and making them public and accessible invites people to think about criticism in a whole new way. I also love that Rescripted writes about the shows and artists that otherwise might not get the spotlight.

What are your artistic disciplines?: Who really knows but mostly writing and solo performance. I’m also learning the ropes of audio art.

What “lenses” do you bring with you when you go to a show?: I bring queer, Black, non-binary, anti-colonial, anti-racist, anti-ableism lenses. I also bring some recent college grad, tarot reading, indecisive millenial, am I a millenial or gen-z, slightly bored of realism lenses.

Who is your favorite theatre artist and why?: There is no singular artist. I fell in love with playwriting through Chekhov and Tennessee Williams. I went to theatre school because of Tarell Alvin McCraney and Steppenwolf. In school I went through big Sarah Kane and Claude Cahun phases as well as learning to take inspiration from fine art and performance art. I also learned to appreciate directing as an art form in a way I never had before. Nowadays, I think my favorite theatre artists are everyone I know, all of my peers. Everyone around me is doing such great things and taking them really far and its amazing. Its my peers more than anyone from the past or of current theatre fame who keep me inspired and in love with all the potential of this art form.

Bio: Elon Sloan is a Black and non-binary writer, artist, and educator based in Chicago who is committed to using a trans-affiming, anti-racist, and anti-colonial framework in their work. The recently graduated from DePaul University with a BFA in Theatre Arts with a focus on Playwrighting, and a double minor in Gender Studies and LGBTQIA Studies. Elon worked for 3.5 years as a LGBTQIA Student Programming Coordinator where they created and facilitated programming for LGBTQIA+ students. Elon also worked as a sex educator with the Illinois Caucus for Adolescent Health for several years as well as a freelance facilitator creating customized workshops on LGBTQIA+ history, social justice, and oppression. Elon’s most recent play, Gray Area, co-written with Micah Bernstein, is a participatory play which helps young people understand the nuances of consent in all areas of their lives. Elon will soon be starting a blog on their site elonsloan.com, which also has links to all of their most recent work.

Ignition Zero is a fantasy webcomic by Noel Arthur Heimpel (they/them) which follows a group of friends as they stumble into a conflict between two primordial spirit forces. I first learned about Noel Arthur Heimpel  through their widely celebrated tarot deck, the Numinous Tarot. The Numinous Tarot is known for imagery that’s beautiful, fantasy oriented, and deliberately inclusive across race, sexual orientation, ability, and gender. As a newcomer to tarot looking for intentional and inclusive decks I saw recommendations for it everywhere.

In a town where the human and faerie worlds overlap readily a group of three old friends Orson, Neve, and Martin, introduce newcomer Robbie to a spirit they’ve befriended. They call the spirit Ivory, though she cannot speak on her own, and protect her from constant attacks from her unseen enemy Vaidya.

One of my favorite things about webcomics is watching the artist’s style change slowly throughout time as they gain experience and intention. The earliest pages of Ignition Zero are hazier and full of blotchy textures and fading lines. These pages are more punky and scary and great for learning about our antagonist. As the story unfolds and begins to question the lines drawn between good and evil the art also changes. Lines become more defined, there are more bright colors, and the background is often filled with nature.

The story of Ignition Zero deals with questions about identity, wholeness and balance. We track the burgeoning romantic relationship of Orson and Robbie who are meeting irl for the first time after an online friendship. We also see Martin and Neve reconsider their life long friendship after a secret is revealed.

For all of its lovely art and compelling themes the one area Ignition Zero seems to struggle in is character development. It’s great to see Heimpel’s commitment to asexual and aromantic representation in the cast but the reader is often told about a character’s identity, rather than seeing it play out in casual or meaningful ways. At the end of the story, all of the conflicts are tied up quickly and feel a bit rushed and neat. I would have loved to see Ignition Zero take a little more room to breathe throughout its story.

Despite this Ignition Zero is a really fun and beautiful webcomic. Heimpel’s strength across all of their projects, Numinous Tarot included, is world-building. Ignition Zero plunges you into a world with lots of specific rules and strange relationships but I never got lost. The many layers of the world are well thought out and engaging in their own right and they make the comic richer despite some character stagnancy.

This comic is a great read for anyone looking for a queer fantasy story, and for tarot readers there are a few bonus references thrown in. A dangerous tower holds the answers the group is looking for. A character considering their identity and turning over a new leaf manifests a magician.

This webcomic, finished three years ago, makes me even more excited for Heimpel’s current work on their second webcomic. Its one more testament to their skill at working with watercolor and accessible world-building, and I can’t wait to see where they take those talents next.