Get to know Lonnae Hickman, a recent Alumni of The Key Young Critics Mentorship Program! Each writer wrote a multimedia review about a piece of pop culture currently capturing their imagination that you can read at the end of Lonnae’s profile. We’d like to thank Angelica Jade Bastien at Vulture for sharing her insights on media reviewing with us. Check out more of Lonnae and her cohort’s writing in our Key Reviews section! 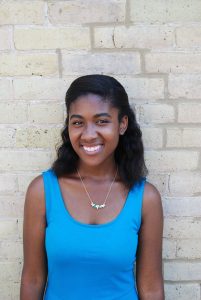 A Star Is Born (2018), is its fourth Hollywood retelling, that chronicles a journey about a famous musician (Bradley Cooper) who discovers the struggling singer Ally (Lady Gaga). It’s about their relationship as Ally’s career takes off, but it’s also a look at the price of stardom and entertainment. This retelling stars Lady Gaga as Ally, Bradley Cooper as Jackson Maine, and many other worthy celebs like Dave Chappelle and Anthony Ramos. Cooper also has many hats other than actor in the film; he’s also director and co-screenwriter. I also have to mention the performances by Shangela and Willam, popular drag queens, who managed to make audiences laugh every second on screen.

I’ve never seen the other A Star is Born movies. Nope, not even the Judy Garland one. Mainly because, let’s be honest and say, the other versions are not exactly progressive in highlighting people of color…*cough cough the 1954 version. In this current film people of color just exist. They’re not sassy, they’re not tokenized, and they’re not sad. Which makes this modernized reboot in 2018 interesting to me. It’s clear that there’s one for every generation, which adapts as our entertainment culture changes. This is ironic because while the movie is fed through a money making entertainment industry, it tackles intense and valid themes about stardom for women.

The story, to me, is about Ally as told through the first person camera angles and motifs of the color red. We see the world through her eyes, therefore we fall in love with Jackson. Sometimes the camera occasionally tries to persuade its audience that the story is about Jackson’s perspective, Bradley Cooper did direct this, but it never lasts. The camera unintentionally wants to always be with Ally. This is due to that fact that Lady Gaga as Ally gives a nuanced performance. Lady Gaga does not exist in this movie effortlessly blending into her character, that is until she opens her mouth to sing. Her voice is truly what steals the performance. So much so that when Ally’s voice is ironically stripped and given auto tuned songs it feels wrong to listen to. This is Gaga’s movie, and the title character’s struggles identically mirror Lady Gaga’s own. Many female artists are forced to fit in an artificial mold and told that they need more than their voice to sell music. Gaga has managed to break out of the mold the industry tried to give her as shown in the mismanagement of her Artpop album. Hopefully she’s found her voice for good amidst industry “standards”, just as the audience hopes Ally does at the end of the film.

Sure this is a rebooted film, but there’s a reason audiences keep wanting to hear this story. Regardless of all the reboots happening, this movie feels genuine. It’s a story about stripping women artist of their true voice, to drown out a voice and replace it with sex appeal. It asks what are your morals and can you to be stripped of yourself?

You will not be humming the songs, as catchy as they are, once as you leave the theatre. Audiences at the end of this movie will feel something, there was a level of tension and pain in the theatre that usually only live performances have. This story is not perfect, there are always things that could be better. This shouldn’t deter anyone from seeing this film. Maybe audiences should learn how to deal with sadness? Maybe they shouldn’t always expect endings to be neatly wrapped into a pretty bow. Movies are a reflection of life. While these endings can be hard to watch, they are a visceral part of what it means to be human.