Get to know Aaron Lockman, a recent Alumni of The Key Young Critics Mentorship Program! Each writer wrote a multimedia review about a piece of pop culture currently capturing their imagination that you can read at the end of Aaron’s profile. We’d like to thank Angelica Jade Bastien at Vulture for sharing her insights on media reviewing with us. Check out more of Aaron and their cohort’s writing in our Key Reviews section! 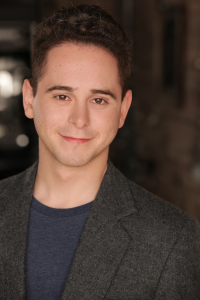 Gender Identity/Sexual Orientation: Mostly cis male, but with he/him/they/them pronouns, and a relationship with gender that could mostly be described as exhausted. Bisexual as heck.

Why do you want to write for Rescripted?: Because I thoroughly agree with Rescripted’s mission of bringing a diverse array of voices into the critical sphere. And because the people seem nice.

What “lenses” do you bring with you when you go to a show?: Jew, person of queer identity, person with anxiety, person with privilege trying to use it well.

Who is your favorite theatre artist and why?: I mean, unfair question. But I’m a pretty big Calamity West fanboy these days. Every play of hers I’ve seen has been tightly paced, devastating, timely, passionate, hilarious, and human.

Bio/Website: Aaron Lockman is an actor and playwright with a BA in Theatre from Columbia College Chicago. He has previously performed with Metropolis Theatre, Citadel Theatre, Eclectic Full Contact Theatre, the side project, Surging Films and Theatrics, and The Living Room. His plays have been performed at The Theater at Monmouth, Mary’s Attic, Prop Theatre, and Columbia College. Aaron also writes reviews of Chicago theatre for the website PerformInk. You can hear his voice on the podcast The Audio Diary of Aaron Lockman, or on the audiobooks Surviving Hitler, Locke and Key, and The X-Files: Cold Cases. You might also have seen him narrating the Adler Planetarium’s sky show, Destination Solar System. Aaron enjoys walking dogs, playing with Legos, talking excitedly about astronomy, and making annoying puns. http://aaronlockman.com

People like Pixar movies for many reasons. But by far, the reason I love this studio so much is that each Pixar movie has a distinct and easily distillable moral center. Each of these has shaped who I am today in some way — ideas like the difficulty of growing up, the importance of preserving childlike wonder into adulthood, and the sham of capitalism, among other things.

But these moral centers are usually quite personal, and the reason Incredibles 2 is the best Pixar movie is that it asks a question concerning not just the viewer, but the way the viewer will affect the world around them.

The intervening years between Incredibles 1 and 2 have of course brought a veritable glut of superhero movies, so this movie had a lot to prove. The difficult line that Incredibles 2 walks — nostalgic yet innovative, human yet fast-paced — is a mammoth achievement in and of itself. But I’d like to focus on the movie’s themes, because Incredibles 2 is a story about people trying to control the superhero narrative. Every character in this film is selling a story, whether to the public or to themselves. Winston Deavor (Bob Odenkirk), media businessman and superhero fanboy, is the most obvious example — he sells the public a controlled narrative about Elastigirl so he can feel better about his father’s death. Elastigirl (Holly Hunter) gets the opportunity in this movie to reclaim her own narrative; the simple glory of saving people and looking cool doing it. And Mr. Incredible (Craig T. Nelson) is of course dealing with giving up that same narrative so he can care for his kids, all the while selling the narrative that he’s a good dad so hard that it eventually becomes true.

Even super-daughter Violet Parr (Sarah Vowell) gets in on this theme, in a comic yet crucial subplot in which her high school crush Tony Ridinger gets his memory of her wiped. There’s a reason that as her mom is reshaping the perception of superheroes in the public eye, Violet is trying to rebuild the memory of herself in Tony. And. . . she doesn’t do a great job.

In fact, no hero in this movie does a great job. The day is saved, but in the same way that the Underminer never gets captured, the underlying problem is never resolved. Heroes are legal again, but the reason they were made illegal in the first place hasn’t been addressed.

And that reason, of course, is public complacency! This movie explores in depth the dire consequences of putting too much faith in public figures, of trusting that we can lay back while the powerful solve our problems, and the ways our media reinforces this in subtle and insidious ways. There’s a reason the villain controls people through television and computer screens. There’s a reason Elastigirl earns the public’s trust through a body camera — by literally letting her audience live their own superhero fantasy through her, as every superhero movie does. At its worst, a superhero movie gives you the adrenaline rush of saving the world without empowering you to actually do it. Real world-ending problems are invisible, dull, and entrenched within systems; you can’t stop global warming by blowing it up. And that one celebrity you love, or that one politician you voted for, isn’t going to fix it, at least not without your help.

I like that Incredibles 2 revels in the giddy theatrics of heroism without being afraid to savagely critique its effects. Superheroes are troubling because they teach us that things get better through individuals, and not because we make things better together, through massive civil movements, which I might point out is the only way in history anything has ever gotten better, ever.
Incredibles 2 asks: How are modern superhero narratives making us complacent? And what, if anything, can we do about it?

The fact that this movie manages to make these devastating observations while still being a manic, self-contained, and visually stunning ride is nothing short of astonishing to me.