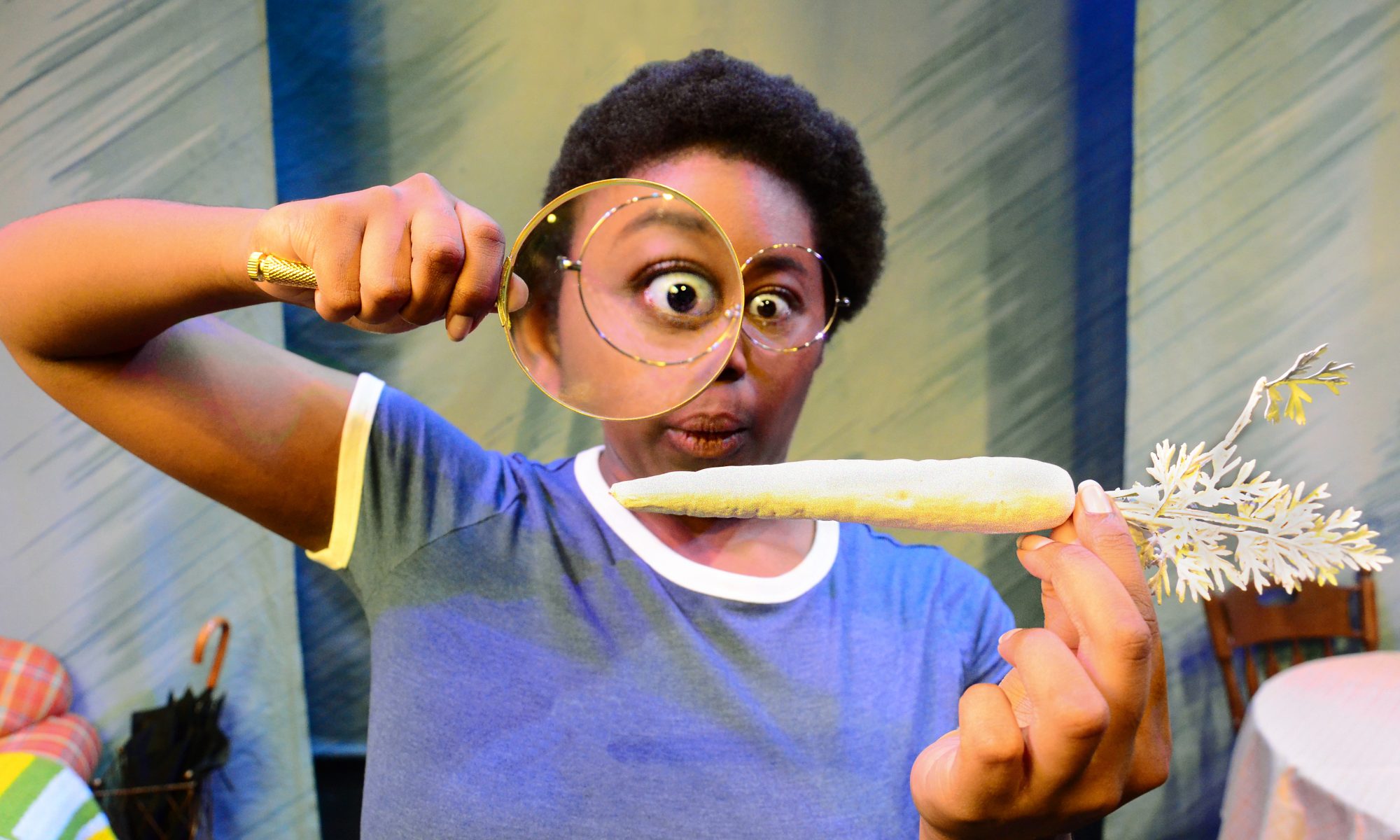 On the surface, Lifeline Theatre’s comedic, musical adaptation of Bunnicula is a fun family event that will have adults and young folks chuckling at animated characters and fun choreography the entire time. On a deeper level, Bunnicula is the story of a family that punishes and pathologizes one of its own members because they do not understand him.

Our main guide to this mysterious world is Harold the dog (Nick Druzbanski), who happens to moonlight as a gumshoe. When the family arrives late to see “Dracula” at the movie theater they are forced to sit in the very back. There they discover a black-and-white rabbit left in a cage with a mysterious note. They bring the rabbit home, promptly name it Bunnicula, and all seems to be well for this well-intentioned family until one day Dad (Chris Davis) discovers a white tomato in the refrigerator. Mom (Kyrie Anderson) cuts into it and finds it dry, chalky, and juiceless.

What could be causing such deterioration of the family fruit? Dad immediately blames Petey, “the bad kid” according to Harold, if Petey is the culprit. Petey denies the charges and starts his own investigation. Harold consults Chester (Carisa Gonzalez) the family cat and learns that Chester has actually already solved the mystery. On certain nights, strange music comes from a strange caravan that drives by the house, and that is when Bunnicula transforms, escapes, and goes hunting for veggies. According to Chester, Bunnicula is a vampire. Harold doesn’t believe him of course, and he continues his investigation.

Eventually, everyone in the household is making an uncoordinated and ineffective effort to solve the mystery of what is plaguing the veggies, demonstrating a failure to listen to each other and work together. Chester eventually takes matters into his own hands to save the veggies and the family. He begins to sequester Bunnicula to his cage using bulbs of garlic. Mom and Dad punish him for this. In a desperate attempt to illustrate the presence of a vampire in their midst, Chester bites Harold and that offense gets him banished to the backyard.

Eventually, Petey points out that Bunnicula looks really sick, and finally Mom and Dad listen. They take Bunnicula, Harold, and Chester to the vet. Thankfully, the vet is able to identify Bunnicula’s nutrient deficiency, but he is not able to recognize his vampirism. The vet puts Bunnicula on a liquid diet to bring him back to health, and he labels Chester “emotionally overwrought.” Chester is forced to see a psychologist and is banned from reading Edgar Allen Poe. Chester takes to “finding himself by screaming.”

In the end, the audience is treated to delightful and funny choreography and musical numbers (Andrés Enriquez), effective and well-executed puppetry (Noah Ginex), illustrated projections (Michelle Lilly), and clever writing (James Sie). We really get a strong sense of Harold the dog and Chester the cat, but I longed for more about Petey, the precocious Black child living with two white parents. I presumed that he was adopted. If this was ever addressed in the show, I completely missed it.

Moreover, this show left me wondering if Petey, Chester, or Bunnicula would ever be truly heard and seen in this family. Will Petey and Chester’s wellness and nourishment be as prioritized as Bunnicula’s? From what I saw, the outlook is not good. Mom and Dad criminalized and ignored Petey for most of the show and punished Chester even though he was just doing his best to show them what was actually going on. As far as the parents could tell, Bunnicula was not a vampire but just a “strange bunny” with a “very particular way of eating veggies.” For this viewer, the underlying family dysfunction, unexplored racial complexities, and poor treatment of Petey and Chester made Bunnicula a pretty disturbing experience in spite of some really well-produced elements.