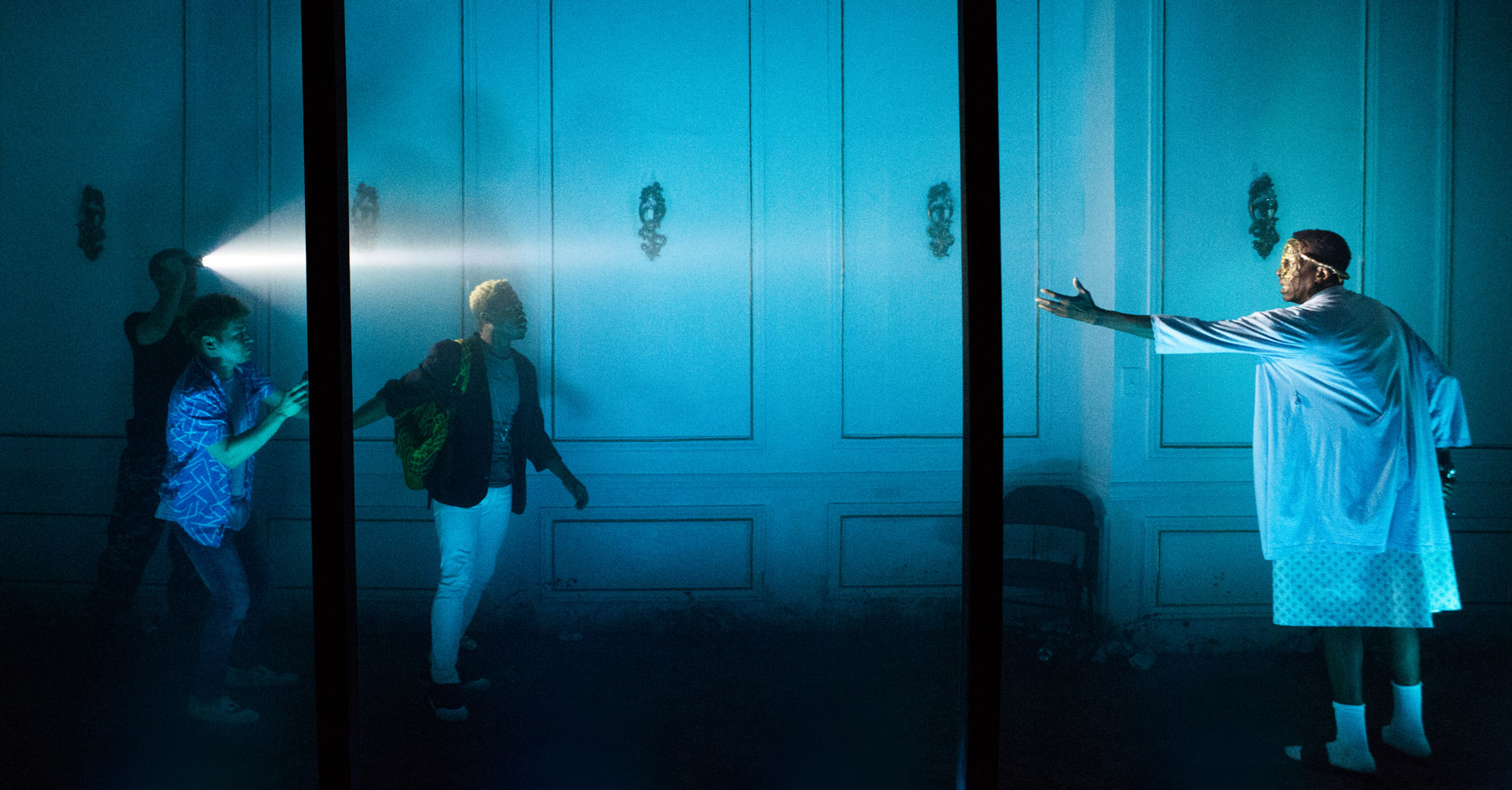 Monty Cole’s Hamlet is a technicolor reinvigoration of Shakespeare’s tragedy and a powerful call to action.

To prepare for seeing Hamlet I reread the play. Walking into The Gift Theatre I felt like a student who had crammed for class, hopeful that I would be rewarded for doing my last-minute homework, fearful that I would still not be able to follow the play’s dialogue in iambic pentameter. As I waited for the house to open, lines from my aged copy of Hamlet remained in my mind’s eye: fixed black text against fragile, browning pages.

As soon as the house opened and I entered the theater, however, the old pages of my book left my mind. I was enveloped by an enchanting mist as I chose my seat and was struck by the sight of Horatio on stage.

He’s wearing boat shoes, a colorful, printed, collared shirt, and he’s impatiently texting someone as he holds a six-pack of beer. I was charmed by his innocence. When he sees the spirit of the dead King, his role as witness to the unfolding tragedy begins. He chugs his beer at the sight of the King’s ghost.

We are then immediately introduced to the family of Hamlet, and it’s like jumping into a cold pool fully-clothed. We meet an aloof, austere Queen Gertrude (played by Shanesia Davis) who stands deferentially next to her King Claudius, the embodiment of toxic masculinity played comfortably and convincingly by John Kelly Connelly.

When the King declares that Hamlet’s grief over the death of this father is “unmanly,” I was so ready to see him die. This production is worth seeing just to witness the way in which this oppressive patriarch receives his just desserts.

Hamlet, played by the wickedly talented Daniel Kyri, bears the brunt of the King’s rebukes silently. He stands with his family yet he is isolated, clearly devastated by his grief in a wide-brimmed black hat that evoked Beyonce in her powerful and political “Formation” video.  Hamlet is told by the Queen to not go to school but to stay. He acquiesces. When everyone leaves the stage we see Hamlet react honestly. He rages, throwing his backpack. In this moment we understand that the central challenge for Hamlet will center around his ability to speak his mind and act on his own behalf while navigating his parents’ invalidation and emotional neglect.

Hamlet’s struggle to speak and act in a manner that is congruent with this awakening political selfhood is beautifully rendered in a scene between Hamlet and Polonius. Polonius has been sent by the Queen to get to the bottom of Hamlet’s apparent madness. Hamlet, who is reading The New Jim Crow by Michelle Alexander, “mistakes” Polonius for a fishmonger. Polonius takes this as further evidence that Hamlet has lost his mind. For me, this moment perfectly sums up how it can often feel when your budding political views are at odds with your family of origin.

Hamlet sees Denmark as a prison, and he says as much. Resisting systems of oppression and having the courage to name them and not be silent about them can feel as isolated as grieving the loss of a loved one alone or dealing with depression. This internal struggle was adeptly depicted by Daniel Kyri. I applaud Cole for pulling this personal and vulnerable aspect of the play angle out so deftly.

A highlight of the play was when Hamlet silently spray painted on the cream wall of his home the words of Audre Lorde in neon pink: “Your silence will not protect you.” With this choice Cole created a wormhole through time and space, connecting Shakespeare to Audre Lorde’s resistance against white supremacy and homophobia through her literary and political work, to today when so many of us rely on Lorde’s words for solace and encouragement as we fight against oppressive systems.

Audre Lorde’s words remain on stage and on that wall for the rest of the play, and they are at once a condemnation and a call to action for the characters in Hamlet and the audience.

As Hamlet watches Rosencrantz and Guildenstern perform “The Mouse Trap” for King Claudius, Kyri’s palpable discomfort accurately mirrors every creator’s fear of not being seen, heard, or impactful.

As is the case of many who wield power and privilege, the King does hear Hamlet’s message loud and clear and he gets upset. He sends Rosencrantz and Guildenstern to fetch Hamlet and they, instead of being co-strugglers with Hamlet against the King become the King’s collectors.

Hamlet hilariously calls them out in a way that 1. I will use the next time I feel like I’m being played like a grade-school recorder, and 2. that reminded me of many social media fights among activists and organizers. Instead of sticking to the plan to hold the King accountable, Hamlet turns on potential allies, a choice that I and so many of my peers have made to our own detriment.

We see the King take on Hamlet’s call-out privately. He gets down on his knees and repents. Hamlet sneaks into his chambers and has the opportunity to get his revenge, but in the end he chooses to not kill the King because to do so would be sending him to heaven as a saved man.

Hamlet puts away the sword given to him by the spirit of his dead father, and we are distraught for Hamlet because now we don’t believe he will follow through with avenging his father. Once again, I resonated with Hamlet, and at the same time I wanted to shake him.

My violent tendencies remind me that I have to shout out Gaby Labotka and her fight choreography. The fight scene between Laertes (Gregory Fenner) and Hamlet was epic, elegant, and frightening. Labotka used the space perfectly and curated a powerful mixture of sweeping, graceful gestures and short, choppy jabs. Not one contact slap was made, and yet I completely bought the danger and ferocity of the moment. I’m not sure I breathed during that scene. I applaud Labotka’s commitment to keeping actors safe while remaining faithful to the story being told and the urgency of the moment.

After finally slaying the King and drinking poison, flanked by the dead Laertes and his dead mother, the last word on Hamlet’s lips is “silence.”

In the shadow of Lorde’s words on the wall, Horatio remains the sole survivor. There is no comfort available for him. Instead, he is charged with the responsibility to tell the whole bloody story to Fortinbras. I thought that Casey Morris as Horatio bore that duty with pride and vulnerability, shaken yet resilient in his ability to speak.

Speaking of speaking, I was delighted and relieved by the fact that I could actually understand the dialogue in this production. The Shakespearean language came through as poetry masterfully held in the mouths of each actor, supported by earnest and emotional performances across the board.

Cole and his design team expertly utilized the small stage of The Gift Theatre. From the very beginning of the play they thrust us into a world intentionally built upon contradictions. The set designed by William Boles was decrepit, dirty, and dingy and at the same time absolutely gorgeous, softened by warm, golden and rose glows against a cream background. Shout out to lighting desighters, Claire Chrzan and Michelle Benda. The set was claustrophobic and cozy; an inescapable, unweeded garden gone to seed, and it was perfect.

The soundscape designed by Jeffrey Levin was equally beautiful and strategic. The sound of the play was spare and yet always supportive to the story being told in the moment. I found it appropriately harsh and searing at times to match the emotions of the audience and rhythmic when it needed to guide us along with the action on stage.

At the end of the play, harsh white lights come up on the audience, and we who have been silent through the show, protected in the dark, are now on display, exposed as witnesses with an opportunity to act, inspired by what we have seen.

This is a show I would happily see again. I highly recommend this production.

Hamlet runs at The Gift Theatre through July 29th.