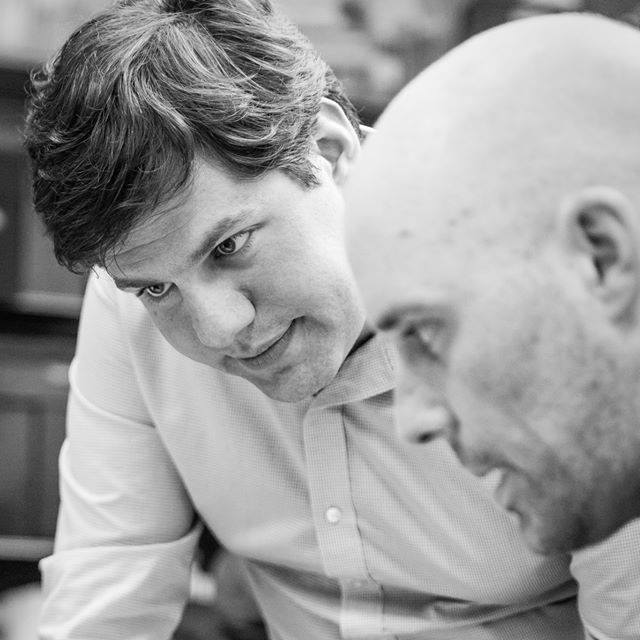 It was the fall of 2012, and I was at the Broadway Armory, seeing Chicago Shakespeare’s imported production of the National Theatre of Scotland’s Black Watch for the second time. In the audience was my friend Joe Zarrow. I congratulated him on the workshop his play Principal Principle had received in Providence a few months before. Stage Left, where I was Literary Manager, had done a reading of his play The Pigeons a few years earlier, and he’d submitted Principal Principle for development in our Residency. It hadn’t been chosen, but I remembered the script, and held Joe’s writing in high regard. It was only a month after the resolution of the Chicago Teachers Union strike, so a play about the struggles of teachers in Chicago seemed like it might connect with audiences. I asked him to send me a draft.

Eighteen months later, the play opened, in a co-production with Theater Seven of Chicago, to terrific reviews and full houses. There were many factors in its success along every step of the way–the direction, performances, designs, and audience engagement were all top-notch. But the first step was the relationship between a playwright and a literary manager and a theatre that gave playwrights a supportive home.

Storefront theatres are essential to Chicago’s playwrights, just as they are to every theatre artist in town. I can’t think of a prominent Chicago playwright who didn’t get their start in a small company. However, the work of Literary Managers (and the departments they lead) is often obscure even to the playwrights who interact with them.

For the past ten years, until I retired earlier this spring, I was ensemble member at Stage Left Theater; for the past seven I was also Literary Manager. In that time Stage Left produced eleven world premieres and seven Chicago premieres. The company also developed over forty plays through LeapFest, an annual festival of semi-staged new play workshops, and over fifteen through the Downstage Left Playwright Residency, which helped early drafts reach a submission-ready state. The role of the literary department within Stage Left was to find scripts that fit our mission–raising debate on political and social issues–and to cultivate relationships with promising playwrights. Here’s how I approached the job and what I learned during my decade in the storefront theatre new play trenches.

The vital question for any theatre that produces new work is how to balance two competing concerns: how do you keep the company open to the greatest diversity of scripts, while not wasting the limited time and resources of the literary department? There are well-documented barriers in the new play pipeline as it currently exists: the most prestigious opportunities are often closed to women, people of color, and those without significant personal wealth. This means that relying on the most pedigreed scripts runs a serious risk of programming dull seasons and perpetuating the inequality that the American Theatre all too often reinforces.

Refuse to read any unsolicited scripts, as many theatres do (particularly those without a Literary Manager), and you risk only considering plays that have already had successful productions from playwrights with the most elite academic and production pedigrees. But read absolutely anything from absolutely anyone, and you will bury your literary department. There are just so many playwrights, and they write so many scripts. The vast majority aren’t right for a particular theatre, whether due to issues of quality, mission appropriateness, or aesthetic fit. How then do companies distinguish which scripts to give full consideration?

There’s no perfect answer here. Every theatre has to strike a delicate balance, with frequent adjustments along the way. But here’s how Stage Left did it when I was there:

The bread and butter of a literary department’s work is reading full-length scripts. These might come in through a sample, an agent, or a playwright with whom the company already has a relationship. At Stage Left each one gets read twice and evaluated based on quality and mission fit. The most promising get put into consideration for either LeapFest or the mainstage season.

Beyond that, Stage Left allows unsolicited ten page submissions from any playwright, anywhere in the world. The company tries to read them all in a timely fashion, and let the playwright know whether they are interested in reading the full script. It’s no reader’s favorite thing to do, and it’s not particularly efficient, but it’s essential as a means of keeping the gates open. On an even more basic level: I can think of at least one play–Jayme McGhan’s The Fisherman–that was produced based on a ten-page submission. And several playwrights initially became known to the company based on ten pages and a resume.

Agents rarely send plays to theatres Stage Left’s size, because an agent’s job is to make as much money as possible for their clients, and there is very little money for anyone in non-equity theatre. This can be problematic when planning a season: the most successful plays, the ones that get the most press and the most awards, and have a better chance of succeeding in subsequent productions, very rarely have rights available for small companies. I can think of several plays the ensemble thought were brilliant and a terrific fit for the mission, only to see the rights go to a company with a larger budget. I can’t say I blame agents and rights holders for trying to get the best deal possible, but it definitely leaves small theatres in a challenging position when it comes to local premieres. The silver lining here is that it forces the theatre to work a lot harder to find exciting local premieres, and sometimes the best productions come from the most surprising places.

The part of Stage Left’s new play programming of which I’m proudest is the Downstage Left Playwright Residency, which happened on an ad hoc level for a few years before being instituted as an official program in 2011. It was established because we saw a gap in what we could do with new scripts that came our way. The Residency allowed any playwright to submit a play in an early or incomplete draft, and work on it with a director, dramaturg, and actors in whatever structure worked best for that particular play and playwright. Playwright residencies, and playwright-driven processes in general, have become more popular in recent years, and that is a wonderful thing. Every play is different, so why should they all have identical processes?

We expected the introduction of the Residency to expand the ways in which we could develop scripts. We didn’t anticipate how many new playwrights we would come to know as a result. We didn’t know Meridith Friedman’s work when she sent us 30 pages of The Firestorm in 2013. We ended up producing two of her plays. Rachel Lynett sent us several Residency scripts over the years, but we never found the right script at the right time. What a joy last year when Well-Intentioned White People came our way. She’d grown into an extraordinarily exciting voice, and we got the chance to work with someone who is already making a remarkable contribution, and will only get more exciting from here.

The lesson? Yes, it is a ton more work to keep the gates open to playwrights from all over. Stage Left reads over 300 scripts a year, between scripts submitted for the Residency, found through samples, received by agents, and pitched by directors. Theatres with paid staff read far more than that. But if we’d limited ourselves to solicited submissions we’d have been cut off from most of the best scripts we’ve done in the past decade.

Diversity–whether of voices, subject matter, style, theme, or narrative perspective–only happens if it is a priority in action as well as intention. This may seem obvious, but I promise it is not. When I started at Stage Left, plays by white men where significantly over-represented in our seasons. Embarrassingly, there were even two full seasons—four shows in a row—of plays written by white men, with white male protagonists and majority white male casts. The company looked at their recent history and decided it simply wasn’t acceptable. Previously, we’d just kind of assumed that, if our intentions were good enough, a diverse slate of plays would drop into our laps. That never happens. We came to understand that prioritizing diversity meant actively seeking it out. We couldn’t be satisfied choosing plays that just happened to appear, and hoping the slate ended up being diverse. We had to individually contact playwrights we found promising and solicit recommendations from other artists, in Chicago and beyond.

And it worked. As we started producing more plays by women and people of color, we started attracting loads of exciting actors, designers, and directors who were in turn excited about our more inclusive programming. The work got better and we were doing a better job fulfilling our mission. It isn’t hard, but it takes intentional time and effort to find and read the plays that will transform your theatre. I truly think that if every theatre made the same effort in terms of play selection, casting, and the people in the room when decisions are made, theatre in this country would do a much better job at reflecting the infinite variety of American stories.

In addition to all of this, the primary job of a literary manager is to cultivate relationships. Being gracious is essential. Playwrights put a lot of time and artistry into every play. They are all deserving of considerate responses. I’ve had multiple playwrights praise for my rejection notes, saying that receiving one encouraged them to keep writing and submitting. In some cases, a playwright’s fourth or fifth script was the one that was finally the right fit for development or production at Stage Left. In others, it meant a nice note from Stage Left was the encouragement they needed to keep working on a play until it found the right home at another theatre. If you really care about playwrights, then helping them to find a home at another theatre is just as much a victory as finding the script that is right for your company.

Building relationships also means responding to emails promptly (a constant struggle, and one I didn’t always win), taking the time to be kind and specific, asking people how they are doing and what they are working on when you see them, and attending readings and productions of new plays. Cultivating a good memory for names and faces helps. Not only will this yield exciting new scripts where you least expect them, it will show the community your theatre is a good home for playwrights.

Reflecting on my career thus far, the word that keeps coming to mind is openness. There is so much playwriting talent out there, and there are so many dedicated people in literary offices who want to showcase it. But they can’t do it alone, audiences have a part to play, too. Be open to new works: buy tickets to new plays, attend readings and give feedback, and tell artists that you appreciate the new plays they do. New play programs are not a safe investment, and only fiercely dedicated audiences can keep them going. As I always said at the end of a post-show discussion: audiences like you are both why and how we do new plays.