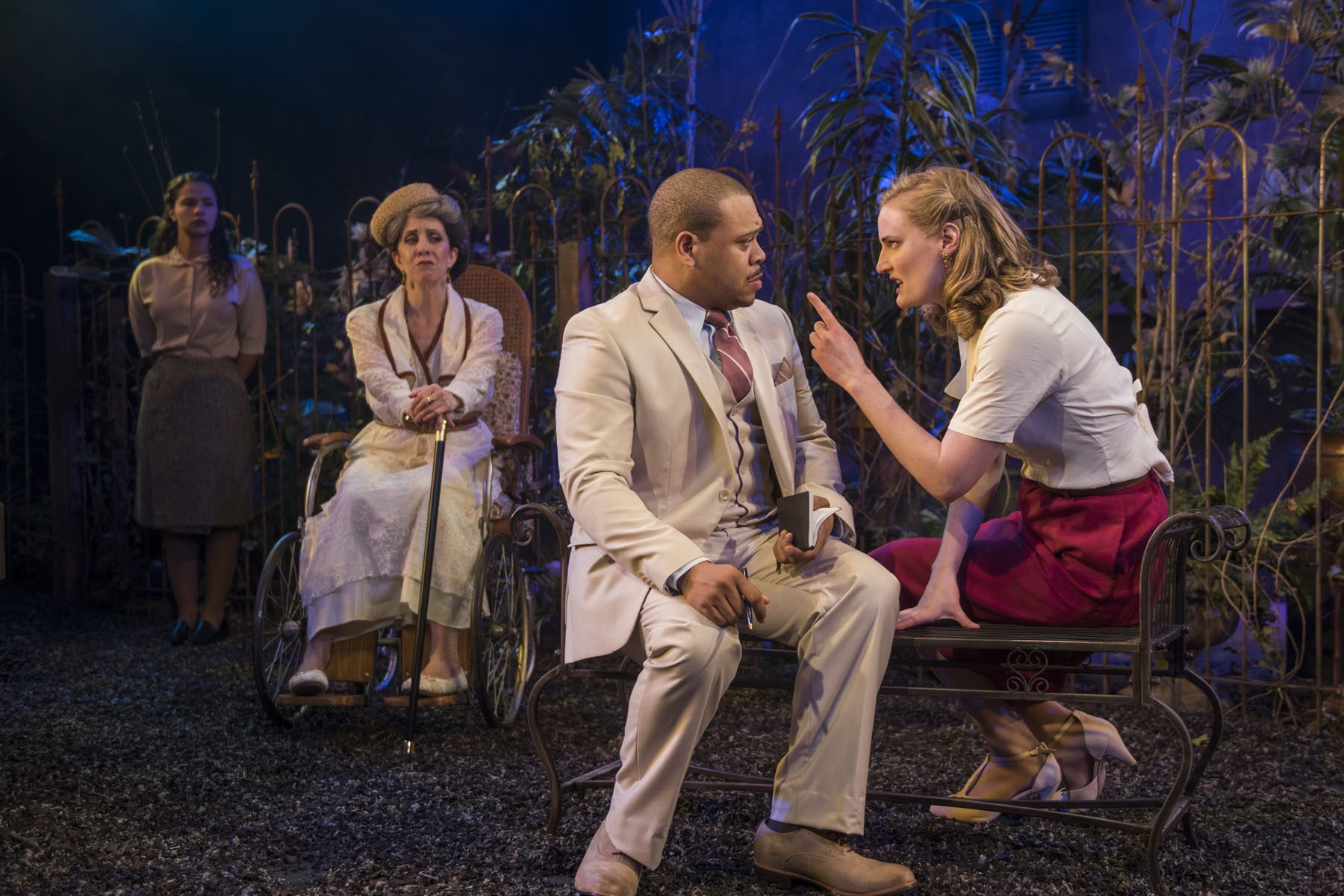 Editor’s Note: This is a guest contribution by local performer Julian Terrell Otis.  Originally these comments were posted on social media, then further expanded with our editors to become a review posted on our site. We are interested in the viewpoint of the artist, and what they have to say about the work coming out of their community. If you are a Chicago artist interested in contributing to Rescripted, please e-mail us at rescriptedreviews@gmail.com, we want to hear from you!

Catherine: “Is that what love is? Using people? And maybe that’s what hate is – not being able to use people.”

It was incredible to watch Suddenly Last Summer at Raven Theatre. I would highly recommend it. To be honest, my experience with Tennessee Williams is limited. I often feel the narrative to be out of touch because of the lofty language, the whiteness, the exposition about class issues that are distanced from current audiences by time, and in a way, it’s petty. But hey that’s the drama of life! Raven’s production is thoughtful and the audience is invited to be a fly on the wall in a very personal family matter regarding mental illness, sex, control, and money. The stakes ride high as the characters navigate their own desires. The setting transforms from a Louisiana estate to some sort of metaphorical jungle where the most vicious creatures that inhabit it are the (white) humans.

The casting reflects that interesting power dynamic. On opening night, the audience was invited into the world of the play through the eyes of the black gaze. In this performance Miss Foxhill was played by Song Marshall, though the role is usually played by Janyce Caraballo. The caretakers Miss Foxhill and Sister Felicity (played by Ayanna Bria Bakari) provide regularity to the upended lives of this ultra wealthy family in crisis. Marshall’s and Bakari’s performances elevate quotidien tasks to epic proportions.The women of color hear the foul words and see the ambition, and I feel their unending struggle to keep these white people in check.  One gets the feeling that Miss Foxhill’s job might be on the line if the daiquiri isn’t made just right and Sis. Felicity may actually fear that bodily harm may come to her from her charge, Catherine (played by Grayson Heyl). One cigarette burn would be too many for me. Yet these women endure because circumstances necessitate it.

Dr. Cukrowicz or Doctor Sugar as he calls himself, played by Wardell Julius Clark, serves as the mediator for this 90 minute drama. This outsider brings a charm and common sense which the audience latches onto as he sorts through this family’s drama. His approach broaches on the magical as he conjures truths that should remain secrets.

Tennessee Williams wrote a play about the ‘Myth of the Man’ in Suddenly Last Summer. The amazing part about the work is that Sebastian, the white man at the center of the plays’ conflict, is dead. Yet, the people that are left behind have to deal with the consequences of Sebastian’s actions. This may be reductive, but for me this play is about how white men use women, the weak (poor, dependent relatives), and servants/caretakers (people of color). The mythical, white, slave owning man remains invisible yet ever present in these people’s lives. The plantation is still defended by the white matriarch and fought over by poor white relatives, while the people of color are just trying to survive in an environment that is toxic for everyone. This collective misery only serves to prop up the myth of Sebastian, the great white patriarch of the family, and hide the secrets that would have died with him. Catherine’s memory has the potential to shatter that myth, yet her voice is discounted. Her power is continually marginalized because of her womanhood and her mental illness. Tensions come to a head as Doctor Sugar peels back the truth from Catherine’s mind. As doubt creeps in Doctor Sugar urges all, “I think we ought at least consider the possibility that the girl’s story could be true…”

Indeed. 60 years later we are still waiting for this possibility to be considered for all women. #METOO