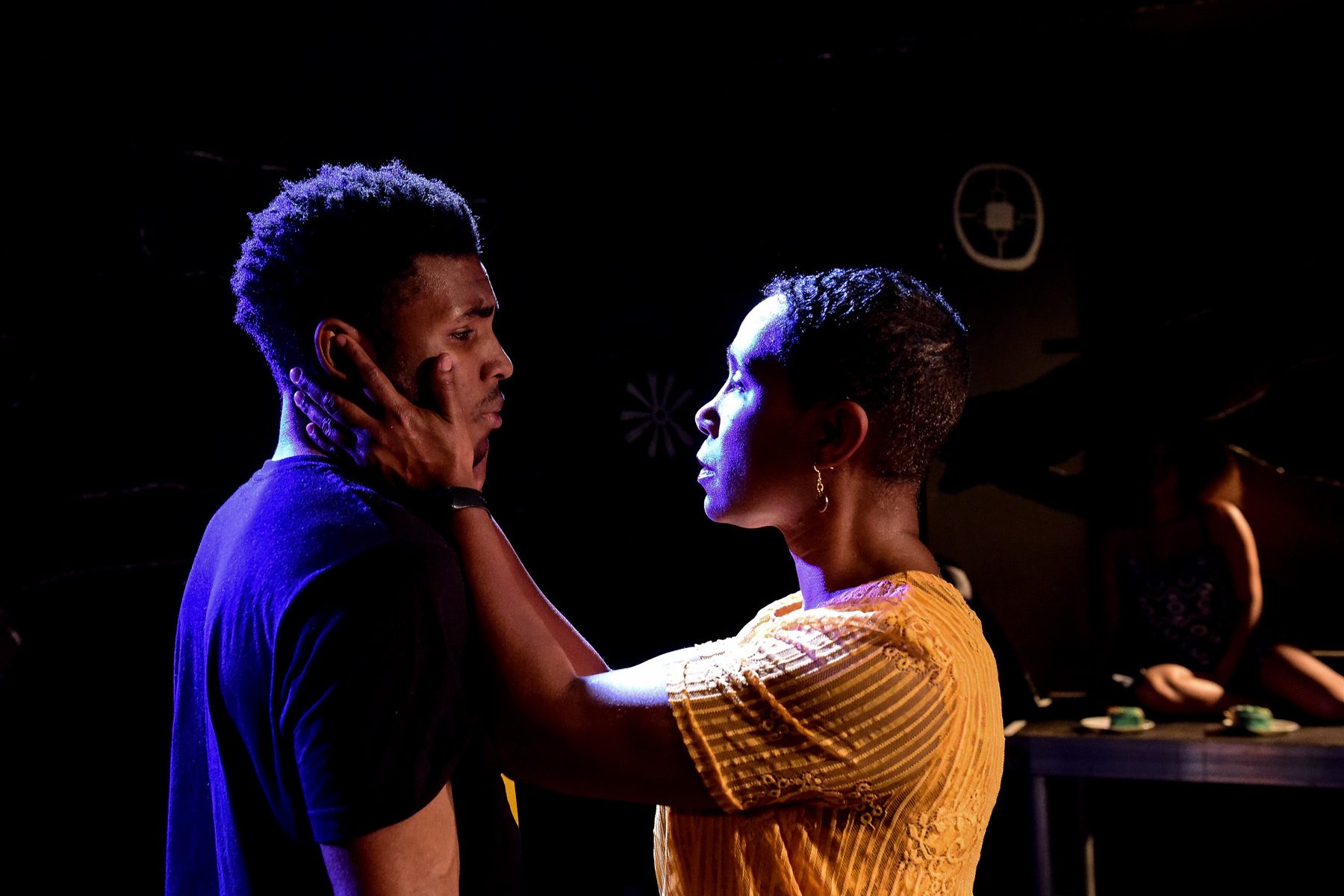 Simply stepping into First Floor Theater’s Dontrell, Who Kissed The Sea is already a theatrical experience unto its own, to say nothing of the magnetic performance to follow. Director Chika Ike’s vision for the play is immediately palpable, and impresses upon audience members from the very first moment that they are entering what will become sacred ground. The inventive and highly successful scenic design of Eleanor Kahn and associate designer Samantha Myers immediately compels the audience to look up, down, and all around them. With Viking and Adinkra symbols adorning the walls of the theater, as well as the scattered pieces of shattered wood that encapsulate the audience, the space evokes a reverent spirituality. Each of the symbols has a meaning, and cast a net of wishes, intentions, and hopes around the playing space. As for the wood, one’s mind goes instantly to the memory of the ships that carried slaves from West Africa to North America. As the house lights drop, and we enter the poetic world of playwright Nathan Alan Davis, the promise of the space unfolds.

Dontrell Jones III, played by the effervescent Jalen Gilbert, is 18 and wakes from a dream at the top of the play. In his dream, he has met his ancestor from the Middle Passage, one who chose to die a free person rather than to live in bondage. When he awakes, he finds his life suddenly seems not quite right.
As Dontrell negotiates a deep and painful family secret with the revelation of his dream, his world slowly comes to light. His parents are demanding in a distinctly Southern way, and Dontrell’s mother, played by the tremendous Shariba Rivers, runs a tight operation, with the exception of Dontrell. Dontrell and his at times unpredictable way of seeing the world can get on his family’s last nerves, and he lives in the wide and watchful harbor of his mother’s patience. Gilbert delivers an earnest portrayal of Dontrell, who has crystallized into the very hopes and dreams of his mother: he is on his way to John Hopkins University at the end of the summer.

The family, and chosen family, that Dontrell has in his best friend Robby, sister Danielle and cousin Shea form a protective layer around him. Robby, played sincerely and confidently by Jerome Beck, does his best to keep Dontrell grounded, and promises to stick with him no matter what. Dontrell’s sister Danielle and cousin Shea, played smartly by Destiny Strothers and Brianna Buckley respectively, strive to do the same, and take him to task when he deserves it. Despite the forces that conspire to keep him on shore, Dontrell fixes himself to go and find this ancestor, even if he has to dive into the deep end to do it. Along the way he meets Erika the Viking lifeguard, played by Kayla Raelle Holder, who is on a journey of her own. Together, they embark on a trans-generational journey that will change Dontrell and his family’s lives forever.

The one person who Davis seems to leave to the fringes until the moment he really needs him is Dontrell’s father, played with a firm command by Brian Nelson Jr.. Along with this near absence, the play explores the transitive properties of grief and violence, specifically as it relates to the enslavement of millions of Africans by European slave empires. Ike fully embraces the tension of this diaspora in her direction of this tricky piece. Davis’s measured poetic style can be deceptively simple, and requires finesse. Too fast, and its weight disappears; too slow and the language ventures out of playwriting and fully into poetry. Ike and the truly wonderful team of actors and designers behind this production walk this critical line gracefully, and delivered a performance that had me at the edge of my seat. Along with the cavernous, and aquatic lighting design by Rachel Levy, and rumbling subtlety of Sarah D. Espinoza’s sound design, costume design by Uriel Gomez contributes a bold and intelligent visual language, one that runs concurrent to the dialogue and action of the play in what felt like a chromatic harmony. Similarly, choreography by Breon Arzell creates a strong foundation for the ebb and flow of the story, while offering a physical artistry to the text. This production unravels the difficult yet revelatory themes that vibrate in the architecture of this hero’s journey, and the result is a deeply moving night of theatre.

First Floor Theatre’s Dontrell, is a prime example of how theatre invites audiences to dive, quite literally sometimes, into the darkest and most painful places in our lives. By and large, the narratives surrounding the history of the United States’ foundational and enduring relationship to slavery so seldom center the voices of the people who lost their lives before, during, and after the Middle Passage. Dontrell asks audiences to imagine a moment where a sort of healing might be possible and to engage in a ritual of witness to that end. It asks searing and difficult questions about the inheritance this country has and who carries the trauma, however, at its core it is about a young man who believes so honestly in the future that he braves the depths of the past to secure it.

DONTRELL, WHO KISSED THE SEA
By Nathan Alan Davis
Directed by Chika Ike

Thursdays, Fridays and Saturdays at 7:30 pm;
Sundays at 3 pm.
Tickets: $10-$20. Tickets are on sale now at firstfloortheater.com.