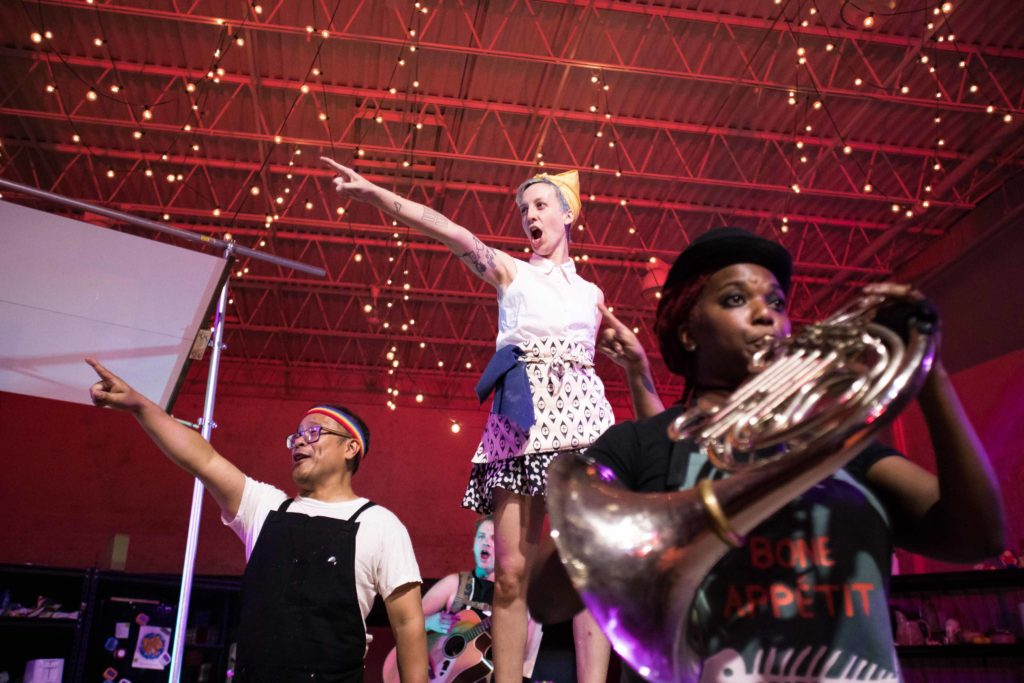 Everything I’ve seen by the Neo-Futurists has always had an inherent sense of vulnerability and a fearless raw honesty which always allows me leave the show knowing the performers intimately. Their new venture, boldly titled The Food Show and created by Dan Kerr-Hobert, is no different . Performed in Metropolitan Brewing’s warehouse in Avondale, the Neos have transformed the warehouse into a badass kitchen stocked with all of the things you might need and have created an a night of adventure structured around a menu. When the audience enters the space, the writer-performers come up and ask everyone about their food allergies, because no one is trying to die tonight. Though unfortunately not everyone gets to eat throughout the night, everyone does get a complimentary beer (which if you’re lucky enough to get an orange slice during the night, I recommend putting it in the beer for a lovely, refreshing summer drink) .

In classic Neo fashion, they strike up friendly conversation with the audience before the performance begins. This simple act of making conversation does a lovely job in building a performer/ audience relationship that allows both sides to feel more comfortable and able to be vulnerable. The performers take us through a culinary journey, cooking up stories of their past to present to us on a plate. They demonstrate various cooking techniques, and explore different culinary philosophies before focusing on a story by one of the performers. Like being in the kitchen of a friend or family, the performers tell stories while cutting onions, making pasta, poaching an egg, or making a roux. The themes of the stories run the gamut of emotions, whether it’s about the healing powers of food and cooking, the frustrating chore it is to eat for some folx and the privilege it is to be a picky eater, or about how food has the ability to bring people closer together or drive kids at the lunch table apart. One story that stood out for me was Tif Harrisons story about the food as therapy, something that can dig you out of a place that feels so dark, to one that has some light. The ensemble is really tight, and though the energy of the piece could use a kick or two throughout the night, there is a simple beauty in watching people listen to each other.

Listening doesn’t just mean being quiet, it means being present, and the presence is felt from everyone in the room. This sense of presence is also amplified by the various design elements. With a giant mirror that hovers about the countertop the audience is invited to a closer view of the action that is happening on the table, which allows us to closely follow along with each step of the recipe. The lighting design is a feat in this non-traditional venue that is not inherently equipped with the tools and architecture that can be found in a conventional theatre. The lighting does a fantastic job helping the audience focus in on the action in front of us, and works harmoniously with the music to create an atmosphere that feels curated for each story. The music composed by Ronnie Kuller and performed by Spencer Meeks stands out as they either play piano, sing, or make sounds with a singing bowl, that allows the transitions into various stories feel seamless, and helps with the pacing of the night.

The Food Show is an examination of the role food and cooking has had on every one of us. I felt invited to have different opinions without feeling like I was in a battle or being left out of a conversation. Food means so much to so many people, as someone who immigrated to America when I was three, cooking home recipes and eating my mother’s cooking was how I hold on to my culture. Food is how I get to know people, I can tell a lot about someone by what they cook, and what they eat, and I felt that I came out of The Food Show really knowing these humans. There were pieces of myself that I found in so many of the stories I heard that night, whether it was the difficulty of cutting meat out of my diet for ethical reasons, or how often we don’t realize how our eating habits tell us so much about ourselves. Leaving the theatre I was reminded of a quote by Krista Tippet from her book Speaking about Faith, “You can disagree with another person’s opinions. You can disagree with their doctrines. You can’t disagree with their experience.” At the end of the night I left the show hungry for some salmon, but satisfied knowing that I wasn’t alone.